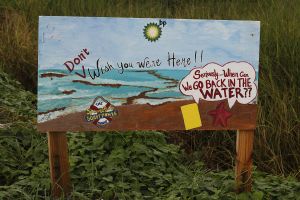 Louisiana residents have expressed their anger at BP's lack of adequate compensation for loss of livelihood due to the oil disaster. Credit: Erika Blumenfeld/IPS

“Most of the people I care about are hungry, they’ve lost their house, they’re losing their cars,” Cherri Foytlin, the co-founder of Gulf Change, a community organisation in Louisiana, told IPS.

“I’ve met so many people who had red beans and rice for dinner last Christmas while this man’s firm is getting 850,000 dollars a month for this,” she said. “I saw people on their knees in these meetings begging this man. I don’t know how he sleeps at night. He takes money from BP and claims to represent and care about people in the Gulf.”

Foytlin refers to Feinberg’s firm being paid approximately one million dollars per month by BP to administer the compensation fund, money that BP claimed would be used to “make people whole” who have lost their livelihoods because of the months-long disaster that began on Apr. 20, 2010.

Rudy Toler from Gulfport, Mississippi is a fourth generation fisherman. He submitted 62 pages of documentation to the Gulf Coast Claims Facility (GCCF), but says: “My claim got denied on Dec. 4, with about 100,000 other people.”

• Final settlements for all present and future damages that require the claimant to agree not to seek future compensation or sue anyone involved in last year's oil spill.

• Smaller interim claims that do not require a lawsuit waiver.

• Quick payments of 5,000 dollars for individuals or 25,000 dollars for businesses that require a lawsuit waiver but, unlike final or interim payments, do not call for financial documentation. Only those approved last year for emergency claims can take a quick payment.


The GCCF, which also covers cleanup and remediation costs, has received nearly half a million claims and has paid about 3.6 billion dollars to approximately 175,000 claimants – about one-third of those who have submitted claims – in the last half year.

Most of the claims that have been paid are temporary emergency payments.

The amount paid out averages nearly 16,000 dollars per claimant. But according to the U.S. Department of Health and Human Services, the 2009 poverty threshold for a family of three was 18,310 dollars.

With mounting problems from an escalating health crisis and decimated fishing and tourist industries, many consider this an inadequate amount of compensation for their loss of livelihood.

While Feinberg admits that mistakes have been made in processing claims, he has also said that many claims lack sufficient documentation to warrant payment.

During a visit to the Gulf earlier this year, Feinberg said: “I will bend over backwards to pay claims.” But large numbers of Gulf residents and fishermen beg to differ.

“I spoke up at the Town Hall meeting in Bay St. Louis, and Feinberg told me to give him my number and information and he would personally take care of it,” Toler says. “Here it is a week later and I’ve not heard from him. You can’t get answers from nobody. Nobody. Now, I’m 15 days past due on my rent. It don’t seem right to me.”

Attorney Brian Donovan, with the Donovan Law Group in Tampa, Florida, believes Feinberg is simply doing what he is being paid by BP to do.

Donovan has written: “In lieu of ensuring that BP oil spill victims are made whole, the primary goal of GCCF and Feinberg is the limitation of BP’s liability via the systematic postponement, reduction and denial of claims against BP. Victims of the BP oil spill must understand that ‘Administrator’ Feinberg is merely a defence attorney zealously advocating on behalf of his client BP.”

The criticism from angry residents, business owners and fishermen of Feinberg’s handling of the GCCF has mounted over this last year, and there continues to be a simmering rage about it.

“We need him to pay us the money that the company he’s working for owes us,” Hopkins said. “He’s not working for our interests. He’s working to save as much of that fund for BP as he can. If he was here to serve us, he’d give us a plan for long-term testing for the chemicals they’ve poisoned us with.”

The chemicals Hopkins referenced are the at least 1.9 million gallons of toxic dispersants BP has used to sink the oil from sight.

Hopkins believes Feinberg is pressuring people to take the smaller, immediate payments, rather than pursue litigation in order to obtain appropriate levels of compensation.

“He’s saying to opt in to the fund, you’ll come out with more money than if you litigate this,” she says. “He’s scaring these people. He’s not our lawyer. But he’s basically saying if you try to sue us, we’ll f*** you up. He’s condescending. He’s completely crooked and corrupt. He’s trying to pull every trick in the book on us.”

Attorney Stuart Smith in New Orleans has assembled a working group of lawyers from Texas, Louisiana, Mississippi, Alabama, Florida and Pennsylvania to prosecute claims for those who have been affected by BP’s disaster.

His firm, Smith Stag LLC, along with the firm Sacks and Westin they are working with, have successfully litigated cases against every major oil company in the world.

Smith’s team has filed suit on behalf of their many clients, as has the Donovan Law Group, against BP.

Another Gulf Coast-based law firm, Brent Coon and Associates (BCA), is also in the midst of litigation against BP. BCA is considered one of the world’s foremost experts on BP, having led lawsuits against BP following BP’s 2005 explosion at the company’s Texas City Refinery that killed 15 people.

BP, which is also being charged with manslaughter for the deaths of 11 workers on the Deepwater Horizon rig that exploded, is facing mountains of litigation.

BCA has threatened the oil giant in no uncertain terms:

“We have built the most comprehensive understanding of BP’s corporate culture of any law firm in the United States. As Lead Counsel in the 2005 BP Texas City litigation, we reviewed seven million documents, taped over 10,000 hours of depositions from BP employees and industry experts, spent millions of dollars and took the fight to depose BP’s CEO Lord John Browne all the way to the Texas Supreme Court. Now we’re taking on the oil giant once again.”

The litigation process will most likely take years.