NEW ORLEANS, Jul 7 2010 (IPS) - Last week, the U.S. Coast Guard, working in concert with oil giant BP, instituted new restrictions across the U.S. Gulf Coast that prevent the media from coming within 20 metres of booms or response vessels on beaches or water. But the insidiousness of the restrictions runs even deeper. 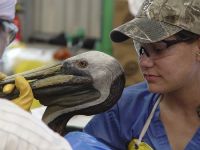 Inside, the International Bird Rescue Research Center, one of the companies hired by BP to clean wildlife, works to wash oiled birds before returning them to the wild.

The centre has limited access to the media, and had been open Mondays, Wednesdays, and Fridays for two hours at a time. IPS arrived at the centre on a Wednesday, only to learn that it had just reduced its media days from three to two, and was no longer open to the media on Wednesdays.

When asked who he worked for, the private security guard informed IPS, “I work for HUB, a security company hired by BP.”

Hub Enterprises out of Broussard, Louisiana has a contract with BP to provide “security officers” and “supervisors”. Don is being paid somewhere between 13 and 14 dollars an hour to do his part in helping BP keep a media lid on what is happening with the largest oil-related environmental disaster in U.S. history.

Up to 60,000 barrels of oil are still leaking into the Gulf every day, more than two months after the Apr. 20 explosion on the BP-operated Deepwater Horizon oil rig.

Last week’s new media restrictions imposed by the Coast Guard subject journalists and photographers to as much as a 40,000-dollar fine, and from one to five years in jail as a class-D felon if they violate the 20-metre rule, that Unified Command calls a “safety zone”.

There have been many indications of a growing and deepening media clampdown in the region in other ways as well.

Last week, IPS had an interview scheduled with the Louisiana State University Health Sciences Center in New Orleans. The interview was with an individual affiliated with LSU’s research strategies into how the BP oil disaster will affect the region.

The morning the interview was to take place, the interview subject, who shall remain anonymous, sent IPS an email stating, “I have been told to cancel the interview. I regret any inconvenience this may have caused you.”

When IPS asked him if there was a reason the interview was cancelled, he replied, “No.”

An anonymous source later informed IPS that the decision to cancel the interview was made by Chancellor Larry Hollier, who heads the LSU Health Sciences Center.

BP is providing the bulk of the funding to be used to study the effects of the oil disaster, and has promised 500 million dollars for research and restoration projects.

Robert Gagosian is president of the Consortium for Ocean Leadership, which represents ocean research institutions and aquariums and manages a programme on ocean drilling research. A marine geochemist, Gagosian is concerned about how that money will be spent, and hopes it will be handled through peer-reviewed grants.

His concern, shared by other scientists and researchers, stems from BP’s interest in preserving its business, and whether the proper criteria will be used in assessing what research should be done.

Jeff Short, a former scientist with the National Oceanic and Atmospheric Administration who is now with the conservation group Oceana, said that by having BP pay for the research, the government cedes control over what studies are to be conducted.

“I find myself wondering, why would BP want to guide money into projects that would clearly show much larger environmental damage than would have come to light otherwise?” he said.

The first 25 million dollars of the BP funds were quickly distributed to Louisiana State University, the Florida Institute of Oceanography at the University of South Florida and a consortium led by Mississippi State University.

Many independent scientists and journalists fear this is part of an effort to influence what studies are conducted and how willing these public institutions will be to talk to the media about the BP disaster.

In another incident, on Jul. 2, Lance Rosenfield, a photographer for the non-profit investigative journalism outlet ProPublica, was briefly detained by police while shooting pictures near BP’s refinery in Texas City, Texas. According to Rosenfield, he was confronted by a BP security officer, local police, and a man identifying himself as an agent of the Department of Homeland Security.

Rosenfield was released after police reviewed his photos and recorded his date of birth, Social Security number and other personal information. The police officer then turned this information over to the BP security guard, under what Rosenfield said was, according to the police officer, “standard operating procedure”.

There have also been restrictions placed on the airspace above areas where clean-up and containment operations are occurring. The Federal Aviation Administration has placed restrictions prohibiting media flights below 900 metres over oil-affected areas.