This story is part one of a three-part series on the challenges faced by people living with disabilities in a world where intense storms and other natural disasters are expected to become the "new normal".

NEW YORK, Aug 14 2013 (IPS) - Like many people living in the path of Hurricane Sandy last fall, Lauren Scrivo needed more battery power. Despite a call offering help from the mayor of Fairfield, New Jersey, where Scrivo lives with her family, her concerns went far beyond extra water bottles and flashlights. 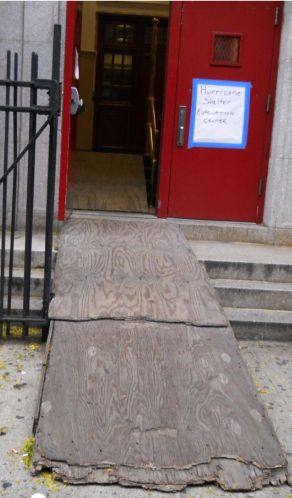 An emergency shelter at Seward Park High School in Lower Manhattan during Hurricane Sandy that disabled people had a hard time accessing. Credit: Center for Independence of the Disabled, New York (CIDNY)

Scrivo, a communications specialist at the Kessler Foundation, has a form of muscular dystrophy and uses a ventilator and power wheelchair. When the electricity went down during the storm, she only had battery power to fuel the machine; leaving the generator running outside was too risky.

“When we lost power it was a little scary, we didn’t know how long it would be for. I couldn’t leave the generator running at night because people were stealing them, so [I] had to use battery power,” Scrivo told IPS.

The gas shortage also presented an enormous danger for Scrivo as her generator began to run low on fuel.

“You can’t just go out and stand in the gas line,” she said. “If we couldn’t fuel our generator, we wouldn’t have been able to recharge my [ventilator] batteries or use my other necessary medical equipment.”

Now Scrivo, along with the global disabled community, will have the opportunity to voice her concerns after the United Nations Office for Disaster Risk Reduction (UNISDR) launched a survey asking people with disabilities about their experience living with and preparing for disasters.

The survey, believed to be the first time global data on emergency planning and disabilities is being collected, asks participants what kind of emergency, from landslides to insect infestations, their communities are vulnerable to, and whether they have been involved in municipal emergency management planning.

“We know from a number of major disasters that disabled people are overlooked… twice as many [disabled] people died in the Fukushima disaster [than non-disabled people],” Denis McClean, spokesperson for UNISDR, told IPS from Geneva.

Roughly 10 percent of the world’s population is living with a disability, according to data from UN Enable, the United Nations body that focuses on disability issues.

“It’s quite clear that we need to pay more attention and talk to disabled people,” McClean said, adding that disabled people are at a particular disadvantage when it comes to early response in emergencies.

New York City’s disabled population, which numbers over 800,000 according to data from the Center for Independence of the Disabled, New York (CIDNY), recently had to deal with devastation from Sandy.

During the storm, there were 118,000 disabled people in the Zone 1 evacuation area alone, according to CIDNY.

Milagros Franco, a disaster case manager for Sandy survivors at the Brooklyn Centre for Independence of the Disabled (BCID), believes that disaster planning and response for disabled people in New York City is inadequate.

“I was kind of snobbish… I got some food beforehand, I had two flashlights. I live in Manhattan, so I didn’t expect the lights to go out,” Franco, who has cerebral palsy and uses a power wheelchair, told IPS.

The day before Sandy made landfall in New York, Franco’s superintendent told her the building’s elevator would be shut down as the lobby of her East 21st Street building is prone to flooding. Although she lives on the second floor, “When you’re in a wheelchair, that’s pretty far,” Franco says.

Franco was stuck in her building for three days, but did have a friend with her who ventured to 34th Street for food and phone recharging. In lieu of the buzzer system, which was a victim of the power outage, Franco lowered her keys, tied to a piece of rope, out her window to let her friend inside.

But some people aren’t so lucky to have a support system, said Margi Trapani, communications and education director at CIDNY. Enlisting the support of family and friends is one of the main ways the City of New York tells disabled people to prepare for disasters, along with preparing a “go bag” of emergency supplies and knowing how and when to evacuate.

Trapani’s organisation, alongside BCID and two individual plaintiffs, filed a lawsuit against Mayor Michael Bloomberg and the City of New York in 2011 after perceiving a lack of help from the city for people with disabilities during disasters in the decade following the Sep. 11, 2001 attacks. The case was heard in March, with the judge’s ruling expected at the end of the summer.

“During 9/11, people with disabilities had been left off the map,” Trapani told IPS. “There were a lot of respiratory problems and mental health issues [after], tonnes of issues no one was prepared to deal with.”

Hurricane Sandy revealed the inadequacy of emergency shelters for the city’s disabled population. Issues with the shelters include non-accessible and stairs-only entrances, lack of accessible bathrooms and cots, and staff who are underprepared to respond to disabled people, Trapani says.

More inclusion of disabled community in the emergency management planning process is a step the city can take to improve its response, Trapani says.

“Our community can help in these situations… we’re experts in figuring out how to deal with problems,” she says.

When a disaster strikes at short notice, there is sometimes a limit to how ready people can be.

“No matter how prepared you think you are, you’re never prepared until after the fact,” Franco said, adding that at least now she has a hand-crank radio.

(See Part Two and Part Three of the series)