WASHINGTON, Dec 4 2012 (IPS) - Underlining the persistent power of their party’s most right-wing elements, a majority of Republican senators Tuesday blocked ratification of the long-pending International Convention on the Rights of Persons With Disabilities (CRPD). 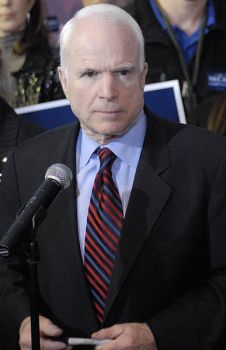 Sen. John McCain, who suffered life-crippling injuries as a result of his plane crash over North Vietnam and subsequent mistreatment as a prisoner-of-war, issued a strong appeal for a favourable vote. Credit: Chris “Mojo” Denbow/cc by 2.0

While sixty-one senators, including a number of senior Republicans, voted to ratify the treaty, it fell five votes short of the required two-thirds needed for ratification under the U.S. constitution. Thirty-eight senators – all Republicans – voted to oppose it.

Nonetheless, the Majority Leader, Sen. Harry Reed, vowed to bring up the treaty for another vote when a new Congress, which will include two additional Democratic senators, convenes next year.

Independent analysts agreed that ratification would indeed be possible because several Republicans who had previously indicated they favoured the treaty changed their position at the last moment.

“I plan to bring this treaty up for a vote again in the next Congress,” Reid said after the vote, which was roundly denounced by human rights and disability groups. “Our wounded veterans and millions more around the world deserve better.”

The White House, which some activists criticised for not lobbying more strongly for the treaty, also expressed disappointment with the result, noting that ratification “would improve the lives of Americans with disabilities – including our wounded service members – who wish to live, work, and travel abroad.”

The Convention was initially negotiated by the administration of former Republican President George H.W. Bush and was largely based on the landmark Americans for Disabilities Act (ADA) that Bush signed into law in 1990. It is one of half a dozen treaties Barack Obama had prioritised for ratification when he became president in 2009. He signed the treaty shortly after taking office.

Besides the disability treaty, the Law of the Sea Treaty (LOST) and the 1979 Convention on the Elimination of Discrimination Against Women were also given top priority.

But none has been ratified due to opposition by Republicans, a majority of whom have argued that international treaties unduly constrain Washington’s freedom of action in the world or threaten U.S. sovereignty.

“The treaty threatens U.S. sovereignty through the establishment of the unelected U.N. bureaucratic bodies called the Committee on the Rights of Persons with Disabilities and a Conference of States Parties that would implement the Treaty and pass so-called ‘recommendations’ that would be forced upon the U.S. as a signatory,” said Oklahoma Republican Jim Inhofe after the vote.

“The ability of (that committee) to investigate and recommend changes also chips away at the ability of a sovereign nation to govern itself.”

The Convention, which was opened for signature in 2007 and entered into force a year later, bans discrimination against people with disabilities and promotes their dignity, independence, and full participation in society. It has been signed by 154 nations and ratified by 126.

“U.S. leadership has been influential in putting disability rights issues on the international agenda, but the Senate vote is a big step backward,” said Antonio Ginatta, US advocacy director at Human Rights Watch.

“Ratifying the treaty would have built on the U.S. commitment to the values embodied in the (ADA) and provided the framework to advance and promote the rights of people with disabilities globally,” he noted.

The treaty’s provisions are considered fully consistent with the ADA, which was approved by the Senate, including a large majority of Republicans, by a 91-6 margin 22 years ago – testimony to how far the party has moved to the right in the two decades since.

Indeed, Republican opposition was particularly remarkable in light of the efforts by two former Republican presidential nominees – both wounded war veterans, no less – to lobby their party colleagues up to the very last minute to vote yes.

Sen. John McCain, the party’s 2008 candidate who suffered life-crippling injuries as a result of his plane crash over North Vietnam and subsequent mistreatment as a prisoner-of-war, issued a strong appeal for a favourable vote, while 89-year-old former Sen. Robert Dole, the 1996 presidential nominee whose arm was shattered during World War II, made an extraordinary and dramatic appearance on the Senate floor in support of the treaty.

“This is one of the saddest days I’ve seen in almost 28 years in the Senate, and it needs to be a wake-up call about a broken institution that’s letting down the American people,” said Senate Foreign Relations Committee Chairman Sen. John Kerry, who led the floor fight and is reportedly on Obama’s shortlist to succeed Hillary Clinton as secretary of state.

“This treaty was supported by every veterans group in America, and Bob Dole made an inspiring and courageous personal journey back to the Senate to fight for it,” he said. “It had bipartisan support, and it had the facts on its side, and yet for one ugly vote, none of that seemed to matter.”

But the opposition, including the Republican leadership, was determined. After the Nov. 6 elections, no less than 36 Republican senators – enough to block any ratification – signed on to a letter opposing consideration of any treaty during the current “lame-duck” session of Congress.

Last week, Santorum, during a press conference featuring his own four-year-old severely disabled daughter Bella, who was born with Trisomy 18, argued that the treaty’s “best interests of the child” standard could result in the government’s determining that she was not entitled to special treatment that was designed to keep her alive.

“Now that the CRPD is defeated, we know that the United Nations won’t have oversight of how we care for our special needs kids,” Santorum said after Tuesday’s vote.

Santorum and other treaty foes also mobilised opposition from the growing home-school movement, whose roots lie in the 1960s “counter-culture” but which now consists mostly of Evangelical Christians and Tea Party activists.

“I and many of my constituents who home-school or send their children to religious schools have justifiable doubt that a foreign body based in Geneva, Switzerland, should be deciding what is best for a child at home in Utah,” Utah Sen. Mike Lee, who also objected to the reporting requirements included in the treaty, told The National Review this week.

But these reasons were mocked by the treaty’s backers who said the Republican position recalled the right-wing paranoia of the early 1990s when members of the so-called “militia movement” raised alarms about alleged “black helicopters” from the U.N. running surveillance flights over the U.S. heartland.

“The 38 senate curmudgeons who voted down this treaty remain stuck in a partisan twilight zone of U.N. black helicopters and conspiracy theories – even when the U.S. Chamber of Commerce, veterans groups, and disabilities rights organisations were clear about what was best for the nation and the world,” said Don Kraus of Citizens for Global Solutions, a national grassroots group.