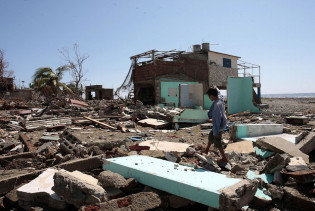 By George Gao
The “Spirit of America” is one of 10 ferries that carry passengers from Manhattan to Staten Island. Its keel – which lies on the bottom of the boat and carves through the waters of New York Harbour– was built with steel from the collapsed Twin Towers.

By IPS Correspondents
From Zimbabwe to El Salvador, women in poor countries suffer the brunt of climate change, but also learn to recover from disasters, to adapt and even to find opportunities in the new weather conditions.

By Desmond Brown
Tourism-dependent Antigua may have been spared the ravages of superstorm Sandy, but the island is nevertheless feeling its effects on environmental, political and economic fronts.

By Rebecca Hanser
Undocumented immigrants have played a significant role in recovery efforts since Hurricane Sandy swept the northeast United States one month ago. But despite their contributions, they have been left in the storm's wake with little financial, legal or moral support.

By Patricia Grogg
"The city looked as if it had been bombed. On the way to my office, I passed people who had the same shocked look on their faces as I did. We would look at each other, and even though we were strangers, we’d ask ‘How did things go for you? Did anything happen to your house?’ It was a kind of warm solidarity that did me a lot of good.”

By Rebecca Hanser
Dee Knight experienced Hurricane Sandy in several different capacities. As a reporter and an organiser, not only did he report on the aftermath of the hurricane, but he was also a part of "Occupy Sandy", a response to the hurricane based on solidarity and charity.

By Stephen Leahy
Hi, this is Sandy. By the time you read this, I’ll be gone, after dissipating into increasingly weaker remnants of strong winds, heavy rains and snowfall in the Great Lakes region of North America.**

By Becky Bergdahl
In one night, Hurricane Sandy devastated large parts of the East Coast of the United States. But in the long run, the aftermath of the storm could have some positive effects as different religious communities learn to work side by side to tackle challenges brought on by the disaster.

By Rebecca Hanser
As the East Coast deals with the havoc and devastation wrought by Hurricane Sandy, climate scientists are seeing yet another reason to put climate change and global warming on the current political agenda.

By Jim Lobe
With less than a week left in the 2012 election campaign and much of the Northeast recovering from Hurricane Sandy, President Barack Obama and his Republican challenger, former governor Mitt Romney, are running neck and neck in the national popular vote, according to the most recent surveys.
ADVERTISEMENT ADVERTISEMENT