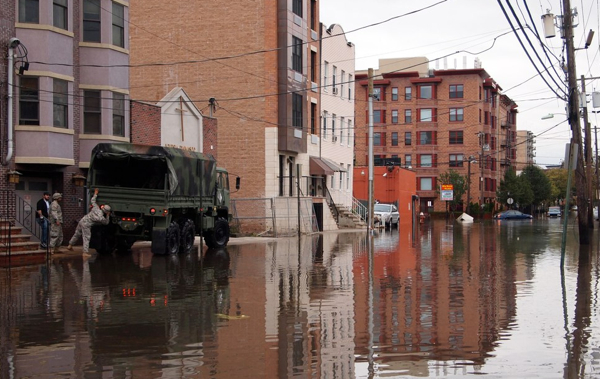 A street in New Jersey after Hurricane Sandy, which wreaked havoc along much of the East Coast. Credit: May S. Young/CC by 2.0

NEW YORK, Nov 1 2012 (IPS) - As the East Coast deals with the havoc and devastation wrought by Hurricane Sandy, climate scientists are seeing yet another reason to put climate change and global warming on the current political agenda.

The storm has reignited the hotly debated topics of climate change and global warming, which environmentalists blame for Hurricane Sandy. With recovery an immediate concern, environmental groups also worry about different forms of pollution resulting from the storm.

“Sandy is what happens when the temperature goes up a degree. The scientists who predicted this kind of megastorm have issued another stark warning: if we stay on our current path, our children will live on a super-heated planet that’s four or five degrees warmer than it is right now,” said Bill McKibben, president and co-founder of the climate advocacy movement 350.org, in a press release.

Global warming is caused mainly by human activities such as burning fossil fuels like coal. This operation and others lead to higher concentrations of greenhouse gasses that raise the temperatures of both the oceans and the earth’s atmosphere.

“The fossil fuel industry is causing the climate crisis, leading to more extreme weather events like Hurricane Sandy,” McKibben said. “We’re calling on Big Oil to stop spending millions to influence this election and donate the money to disaster relief instead.”

A recent report published by the Rainforest Action Network demonstrated that banks that finance and invest in carbon intensive companies are also responsible for the deteriorating global climate. They also do not properly measure their carbon footprints, despite sufficient and available guidelines to help them do so, according to the report, “Bankrolling Climate Disruption: The Impacts of the Banking Sector’s Financed Emissions“.

Not everyone agrees with the claim that global warming and climate change alone have paved the way for Hurricane Sandy.

“It’s a probabilistic issue. You can’t say that Sandy occurred because of climate change, but what you can say is that that such storms are much more likely to happen with contributing factors that include things directly related to climate change,” Steven Hamburg, chief scientist at Environmental Defence Fund, told IPS.

“Could Sandy have happened without climate change? Sure. Is it likely? No,” Hamburg added.

David Biello, an environmental journalist and associate editor at Scientific American, agreed. “Global warming didn’t spawn Sandy but it certainly contributed to the impact, with a couple of features definitely worsening it,” he told IPS.

“Higher sea surface temperatures have made the storm surge stronger,” he explained. “Normally hurricanes come up to the coast and turn right back into the ocean, but as a consequence of the major meltdown of Arctic sea ice this summer, there was a weather pattern preventing Sandy from taking that course, and [it] steered it back into land.”

One conclusion on which experts do agree is that the frequency and intensity of hurricanes like Sandy will increase over time.

“Global warming was probably a small but significant factor for Sandy. But it’s a factor that will grow over time,” Michael Oppenheimer, climate scientist and professor at Princeton University, told IPS.

“Such massive storms only happen once every 100 years, and now this kind of event is becoming more frequent, which is a huge challenge for human adaptation and resilience of our infrastructure,” Biello elaborated.

Hamburg agreed, noting, “we’re not seeing more hurricanes…It is more the different types of storms, the intensity of the storm surge.”

Hurricane Sandy has broken the so-called “climate silence” of this year’s elections. The storm has thrown a wrench into campaign efforts, halting activities Monday and Tuesday as it became impossible to ignore the topic of climate change, which has penetrated the national dialogue.

“The presidential candidates decided not to speak about climate change, but climate change has decided to speak to them,” said Mike Tidwell, director of the Chesapeake Climate Action Network, in a press release.

Biello, the environmental journalist, believed otherwise. “I’d like to think so, but we’ve had several wake-up calls along the way, of which the biggest was Katrina, which wiped…New Orleans of the map. Unfortunately, up until now, not much progress has been made.”

The New York-based organisation Riverkeeper expressed concern about the increase in water pollution due to floating debris, oil spills, and other chemicals leaking from the fuel tanks of swamped vehicles and boats, all of which are contaminating the waters of the Hudson River and New York Harbour.

Riverkeeper also stressed the danger to public health caused by sewage overflows, which are already considered a “chronic problem”.

In a press release, the group explained that although sewage overflow is common during moderate or heavy storms, the contamination with Sandy was different because during the storm surge sewage, spilled back onto roads and into homes instead of being discharged into the river or harbour.

“This storm is not yet over,” said U.S. President Obama in a speech Tuesday at the Red Cross headquarters. “There is no time for inaction. Recovery is going to take a significant amount of time.”