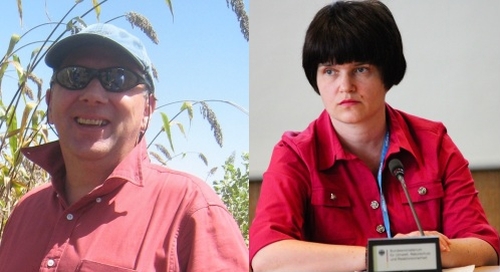 Rising global temperatures and shifting rainfall patterns will affect production of staple foods like maize, rice and wheat. The reports estimate that by 2050, climate change could cause irrigated wheat yields to fall by 13 percent in developing countries, and irrigated rice yields by 15 percent.

The reports are “Recalibrating Food Production in the Developing World: Global Warming Will Change More Than Just the Climate” by CCAFS theme leader Philip Thornton, and “Climate Change and Food Systems” by CCAFS head of research Sonja Vermeulen. IPS spoke to the two researchers by telephone. Excerpts of the interviews follow:

Q: What is the global warning sounded by the reports launched by CCAFS?

PHILIP THORNTON: I would say that the overall message from the two studies is that climate change may have considerable impacts on agriculture in developing countries, but there are many things that can be done now to help reduce the burden on smallholders.

Action is required now at many levels, not only to adapt but also to mitigate – and there are wide overlaps of actions that can serve both adaptation and mitigation.

Q: Agriculture and the food production chain are among the biggest contributors to greenhouse gas (GHG) emissions. Does feeding the world produce a huge carbon footprint?

SONJA VERMEULEN: The emissions footprint of food production involves the combined emissions of all the stages of food production, from ‘fertiliser to fork’. It includes manufacture of inputs like fertilisers, then agriculture itself, but also food distribution and sales, use of food in the home, and how food waste is managed.

There are large country variations, but food production, including agriculture, contributes from 19 to 29 per cent of anthropogenic (man-made) emissions. The sector that contributes the most is the energy industry, however.

An important part of the impact of agriculture and food production on GHG emissions is of course the energy it uses: machinery on farms, refrigeration, transport over long distances. (Feeding the world represents) between 10,000 and 16,000 megatonnes of CO2 equivalent.

Q: How could climate change impact people’s lives with regard to food security, especially commodities and natural resources?

Ensuring food security for nine billion people (the projected global population in 2050) has to be a priority, but we have to do this in a way that reduces emissions.

Q: The reports point to the urgent need to mitigate and adapt due to the reality of climate change. What actions should countries and food companies take?

SV: There are a wide variety of options that can both help smallholders adapt to climate change as well as reduce emissions – reducing waste, restoring degraded lands, feeding livestock better diets to reduce the amount of emissions per kg of meat and milk, for example.

Q: What are the consequences of the rise in temperatures and the reduction in rainfall periods?

PT: Rising temperatures and changing rainfall amounts and patterns will inevitably change the nature of growing seasons in some places and will also change the suitability of different places for different crops. In such cases, it may be that there are different varieties that can be used that are more heat-tolerant; perhaps the areas of production can be shifted to more suitable areas (e.g. shifting potato cultivation to higher elevations where it is cooler).

Regarding pests and diseases, it is certain that the prevalence and distribution of these will change, and in some cases will become increasingly important.

Q: What are the changes we may see in our diets?

PT: Climate change impacts on agricultural production may bring about substantial changes in the relative costs of different sources of calories and proteins. In developed countries, we may want to consider ways of reducing the over-consumption of certain types of food and reducing waste, because such things can help cut emissions.

In developing countries, research and development organisations may want to start thinking about ways to help smallholders grow and utilise new crops that they currently have no or only limited experience with. The issue here is to help provide smallholders with options to diversify their diets where this is appropriate.

Q: The reports say farmers around the world, especially smallholders in developing countries, should have access to the latest technology and science. Is climate-smart agriculture possible?

PT: Smallholders have enormous experience of farming, but the pace of change means that many of them are having to operate in very unfamiliar conditions. In such cases, proven technology and good science can surely help enhance food security and livelihoods – this may involve the use of new varieties that are drought-tolerant, or helping farmers to use seasonal weather forecasts to adapt their management practices to the current season. But yes, to help them towards an intelligent and resilient agriculture.

Q: How will these global changes affect different parts of the world?

PT: Several studies show that large areas of sub-Saharan Africa and parts of South Asia and South-East Asia may be particularly vulnerable to the effects of climate change.

Q: Is it true that growing crops is about to become even more unpredictable at a global level?

PT: The climate during the rest of this century is very likely to become more variable (more droughts, more floods, more extreme events), and as a result, agricultural production may well become more variable, particularly in developing countries in rain-fed situations. This is one reason why it is so important to enhance smallholders’ resilience and ability to adapt.

Q: The CCAFS reports predict a catastrophic scenario in the near future. How can we deal with this?

PT: My take would be: it doesn’t have to be like this – if we sit and do nothing, the future does indeed look bad, particularly for those who are in fact least to blame for the emissions trajectory we are currently on. But what I take from these two publications is that there are many practical things that we can do to reduce emissions and to help smallholders adapt. We need action at all levels – local, national, regional and global.