A Recipe for Carbon Farming

DURBAN, South Africa, Dec 2 2011 (IPS) - Civil society has warned of the danger of turning Africa’s food-producing lands into “carbon farms” so that rich countries can avoid making cuts in their carbon emissions. 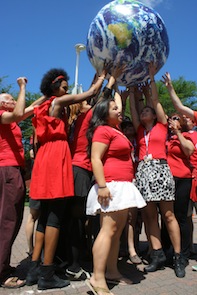 On Friday, they called on host country South Africa to refrain from forcing so-called “climate smart” agriculture into the United Nations climate treaty negotiations known as the 17th Conference of the Parties (COP 17).

South African President Jacob Zuma has stated that agriculture should be part of a new climate treaty. South African officials have previously told IPS they want it included so there will be “specific funds and specific actions” for agriculture under the U.N. Framework Convention on Climate Change.

“Putting agriculture into a future climate treaty is supposedly a consolation prize to Africa for failure by rich countries to agree to legally binding targets,” said Teresa Anderson of the Gaia Foundation, an international non-governmental organisation based in London.

“This consolation prize is a poisoned chalice. It will lead to land grabs and deliver African farmers into the hands of fickle carbon markets,” Anderson told IPS.

Agriculture is a major source of global warming gases like carbon and methane – directly accounting for 15 percent to 30 percent of global emissions. When the entire food production system is included, total agriculture emissions represent nearly half of all emissions. For those reasons there have been previous efforts to incorporate agriculture under a new climate treaty.

Changes in agricultural practices can greatly reduce emissions. However, the best way to do that is through regulations, not a climate treaty and carbon credits, said Anderson.

“Why are markets now seen as the only solution when less than 10 years ago they weren’t a focus at all?”

The World Bank and the U.N. Food and Agriculture Organization and other organisations favour what they call “climate smart” agriculture that is defined as forms of farming that are sustainable, increases productivity and resilience to changing weather while reducing and/or removing greenhouse gases. It is the latter that civil society objects to.

“This is all about new carbon markets. The North still has not made the necessary emission cuts and want this so they can pretend to reduce their emissions,” said Helena Paul of EcoNexus, an environmental NGO.

“There is a profound danger to agriculture here, with real potential for more land grabbing and expansion of monocultures in order to harvest credits,” said Paul.

African governments see the 144 billion dollars in the European carbon market and think this would be a great source of funding, said Anderson. But in fact very little of this money, much less than one percent, ended up in actual projects, she said.

The very first project to sell soil carbon credits in Africa is underway in Kenya. Funded by the World Bank, some 15,000 farmers and 800 farmer groups are changing their practices to sequester carbon for a 20-year period. The costs to set up the Kenya Agricultural Carbon Project along with the costs involved in measuring the carbon and marketing the credits are estimated at more than one million dollars, said Anne Maina of the African Biodiversity Network in Kenya.

At current carbon prices, farmers will get just a dollar a year for their efforts when they were promised much more, said Maina. Only owners of large tracts of land can be expected to benefit. Large landowners and the consultants and other experts will get most of the money, she told IPS.

“Africa is already suffering from a land grab epidemic – the race to control soils for carbon trading could only make this worse.”

The Kenya Agricultural Carbon Project does promote sustainable farming practices such as agroforestry that are good for the land and have increased food production she acknowledged. However, it would be far better to fund these with the adaptation funding that has been promised by developed countries.

In November the carbon price was just six dollars a tonne, 50 percent of what it was in January largely as a result of the European financial crisis. Carbon prices are simply too unreliable for most investors to consider as long-term investments, said Suppan.

Moreover, measuring how much carbon has been sequestered is extremely technical and uncertain over the long term and so investors like the World Bank discount the value by 60 percent.

“Soil carbon credits will only generate tiny revenues for farmers and allows biggest polluters to continue to pollute,” Suppan said.

What African agriculture needs, is real emissions reductions along with substantial adaptation funding, he said.

“Soil carbon credits are a false solution,” to climate change, agreed Nnimmo Bassey, chairperson of Friends of the Earth International.

Bassey called on rich industrialised countries, which are responsible for the climate crisis, to reaffirm their commitments “to legally binding emissions cuts in line with science and equity.”

At a press conference at COP 17, Bassey and other members of African NGOs called on African delegates to stand together to make sure this meeting ends with radical action to legally binding emissions cuts in line with science and equity.

“South African President Jacob Zuma must stand with Africa and be uncompromising…. We need deep and drastic binding emissions cuts by the rich countries and real, public climate finance, not a mandate for a new wave of financial colonialism through a private sector “facility” in the new Green Climate Fund,” said Bobby Peek of Friends of the Earth South Africa said in a statement.