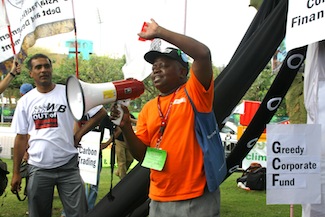 DURBAN, South Africa, Dec 1 2011 (IPS) - Just a few days into the United Nations climate change negotiations, deep divides on the conference’s key issues have arisen. Serious doubts about the adoption of the Green Climate Fund have cropped up, while a second period of the Kyoto- Protocol looks more and more unlikely.

A number of South American countries, the United States, Saudi Arabia, Egypt, Nigeria and Venezuela have voiced reservations about signing off on the GCF, stating the need to revisit some of its clauses. The European Union (EU), which continues to stand behind the fund’s draft document, urged countries not to delay its progress, but so far with little success.

“It should be possible to agree on the draft instrument as it stands. It is a good compromise. In its current form it would attract significant funding,” said EU negotiator Tomasz Chruszczow. “It would be counterproductive to undertake further technical discussions on the instrument.”

Non-governmental organisations and climate activists agree that reopening the negotiating text would seriously undermine the chances of finalising the GCF before the end of the 17th Conference of Parties (COP 17) summit.

“This would mean that there is no instrument into which money could flow. We understand there are concerns from some parties, but this negotiating text represented a finely balanced political compromise and took months to finalise,” lamented World Wide Fund for Nature international climate strategy chief Tasneem Essop.

More than 190 countries at the global climate talks in Durban were expected to sign off on the GCF, which is meant to help developing countries with 100 billion dollar a year by 2020 to adapt to the effects of climate change.

In an attempt to create consensus, COP 17 president Maite Nkoana-Mashabane said she would reach out to various countries through “transparent and informal discussions” over the next few days. There is, however, no definitive process or timeline for those talks. Supporters of the GCF now wait with baited breath for her report-back.

Some experts suggest that instead of reopening negotiations, there should be an additional text to the draft document that resolved some of the most pressing concerns, while other issues could be taken up by the GCF board, once elected.

Immediate funding for adaptation and mitigation will not only help countries to confront climate change but also make sound economic sense. The World Bank and the U.S. Geological Survey estimated that economic losses worldwide from natural disasters in the 1990s could have been reduced by 280 billion dollars, if only 40 billion dollars had been invested in disaster prevention.

But two years after committing to mobilising 100 billion dollar per year for climate adaptation and mitigation, at COP 15 in Copenhagen, developed countries have yet to indicate where any of the promised public funds will come from. Instead they have focused on ways to mobilise the private sector.

“If the fund comes with an empty vault it will be meaningless,” warned Ilana Solomon, policy advisor at ActionAid USA. “We know financial aid times are tough and budgets are tight,” she said in reference to the Eurozone crisis, “but the truth is that rich countries can bring up the money.”

The difficulties to secure funding for the GCF are alarming, because even if countries eventually bring up the entire budget, it will not be enough. Recent estimates by the European Commission and World Bank show that at least double the amount that will be raised for the fund is needed for adaptation and mitigation in developing countries. Other experts note the world will need 5.7 trillion dollars by 2035 to deal with the effects of climate change.

Climate change experts also stress that action is needed now, because it will cost seven times more to reverse negative impacts of climate change, than to invest in prevention.

“It sounds like we’re talking about a lot of money, but the cost of inaction is far higher than the cost of action,” said Oxfam International – Australia climate change policy adviser Kelly Dent. “We need money to fill the fund. And we need it up and running quickly.”

Up until now, countries have not been able to agree on a single mechanism to draw public funds.

Amidst heated discussions about the climate fund, the chances of countries agreeing to a second commitment period of the Kyoto Protocol, which will expire at the end of 2012, have become slim as well.

Aside from the EU, no other industrial nation currently stands behind an extension. The U.S., Russia and Japan have clearly stated their disinterest, while Canada caused a public outcry this week when it became known it wants to abandon the protocol, probably to avoid fines for not reaching its emission reduction targets.

“We cannot let the distraction of Canada’s move take our focus away from very real progress that can be made with the EU and others, as a crucial pathway forward for a legally binding regime and emission reductions,” urged Dent.

Even the EU has been slightly changing tack. It now wants the world’s largest emitters to agree by 2015 to a binding pact to be enacted in 2020 at the latest and offers in exchange an extension to its carbon- reduction goals under the Kyoto Protocol. The EU said it hopes to break the deadlock in the talks and find “common ground” with China and other emerging economies.

But climate change experts believe waiting until 2020 to set firm emissions reduction targets is leaving it too late. “We need ambition to increase emission reduction targets from after 2012. 2020 is too late,” said Dent.

Developing countries, especially Africa where climate change will be felt most severely, keep their hopes pinned strongly on the EU being able to convince other industrialised nations to commit to Kyoto from 2013 onwards.

“For us, a lot is at stake,” said Raymond Lumbuenamo, central Africa regional coordinator of the World Wide Fund for Nature. “We already experience real impacts of climate change. We are the victims of a climate change that we didn’t cause. Africa does not want to be the burial ground of this treaty.”