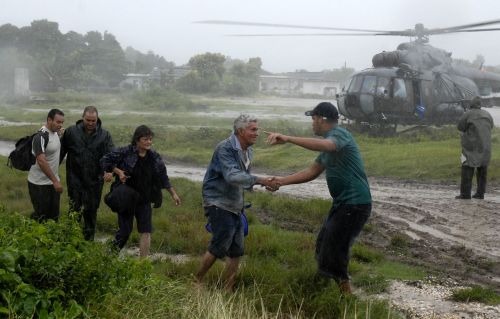 People were evacuated by helicopter due to flooding in central Cuba. Credit: Agencia de Información Nacional/IPS

HAVANA, Oct 29 2012 (IPS) - As the Caribbean reaches the end of October – the second-to-last month of the Atlantic hurricane season – Sandy has caused significant material losses and claimed the lives of 44 people in Haiti, 11 in Cuba, two in the Dominican Republic, one in Jamaica and one in the Bahamas.

By Monday night, it was picking up speed and was expected to make landfall in New Jersey as one of the largest storms on record.

After lashing Jamaica, where it caused flooding and more than 1,000 people sought refuge in shelters, the storm made landfall in Cuba on Thursday as a strong Category 2 storm with maximum sustained winds of 170 kilometres per hour.

Although the country’s disaster prevention and mitigation system went into action, Sandy was stronger and deadlier than expected when it hit the city of
Santiago de Cuba, 850 km east of Havana, where several generations experienced the destructive force of a hurricane for the first time.

“It slammed directly into the city,” one 70-year-old Santiago resident told IPS by telephone. “We had never seen a disaster like this. People are really sad.”

He said the destruction wrought by Sandy in Santiago de Cuba and other towns in the province was worse than that caused by Flora, a hurricane that stalled over eastern Cuba for four days in 1963, bringing heavy rains and severe flooding that left a death toll of 1,750.

“We still don’t know how much was destroyed by the winds,” said the local resident, who preferred not to be identified. On Saturday Oct. 27, the authorities in Santiago de Cuba estimated the damage at more than 2.1 billion Cuban pesos (some 88 million dollars), although the losses in construction, tourism and the sugar industry had not yet been assessed.

Over the weekend, people were still grieving for the nine people killed in the city, mainly in building collapses, and evaluating the damage caused to homes as well as schools and other public buildings. But many were out on the streets helping those in charge clear up the rubble and fallen trees.

Local people who spoke to IPS over the telephone did not conceal their concern about possible shortages of food supplies, and were also worried about how long it would take to restore power supplies, whose interruption has also left local homes without water.

“In the shop they are letting us take home some of November’s (subsidised, rationed) food, but I was only able to buy rice and coffee,” said one woman.

Holguín and Guantánamo, other cities at the eastern end of Cuba, were hit hard as well, while intense rains and flooding also affected the central part of the country, cutting off some roads.

The six spill gates on the Zaza River dam, the country’s biggest, had to be left open to release water.

After the tragedy caused by Hurricane Flora, the Cuban government decided to preserve human life first and foremost, and created a disaster prevention and preparedness system that is now renowned for reducing deaths to a minimum and mitigating the impact of hurricanes and other natural disasters.

The strategy has made Cuba the country with the lowest hurricane mortality rate in the Caribbean.

Sandy is the first tropical storm to lash this country since Ike, Gustav and Paloma caused an estimated 10 billion dollars in economic losses during the 2008 hurricane season.

In an article made available to IPS, meteorologist José Rubiera recognises that the current hurricane season has stood out with respect to other years, because there has been more than double the normal number of tropical storms, as well as “some very intense hurricanes.”

“Some additional effect may be a factor in such unusual activity, and even if it cannot be proven, it is logical to suppose that the global warming occurring around the planet could have an influence,” says Rubiera, director of the Cuban Meteorology Institute’s Forecast Centre.

He further writes that it is “difficult to find answers about the behaviour of tropical storms in a context of climate change, due to the scale on which the storms are occurring and the still low level of resolution of systems for modelling climate change.

“However, in its last report, the Intergovernmental Panel on Climate Change (IPCC) was able to establish that although nothing can be said yet with respect to the frequency of tropical storms, the increase or decline in number, it can be predicted that they will tend to become more intense,” he adds.

Experts point out that with every degree in temperature rise, the water holding of the atmosphere goes up, which means that storms will become wetter as a result of climate change.

“In the face of the prospects for what could happen in the future, there is only one path to follow: adaptation, because we cannot make hurricanes disappear, which means we have to get used to living with them, while ensuring that they cause the least possible damage,” Rubiera writes.

Cuba’s experience in prevention, which Rubiera says is one form of adaptation to extreme events that could become increasingly destructive, is a focus of strong interest, especially for other island nations in the Caribbean, an area extremely vulnerable to climate change.