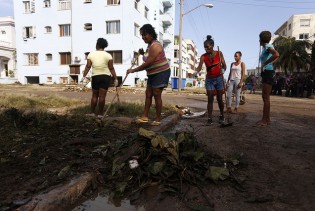 By Jewel Fraser
A centuries-old system for ensuring water security is making a comeback in the Caribbean.

By Daniela Pastrana
A month after Hurricanes Ingrid and Manuel caused the worst destruction from a natural catastrophe in Mexico in 30 years, another disaster has come to light: hunger in communities that are supposedly served by a rural food supply programme.

By Patricia Grogg
Rather than talk about forecasts for hurricanes at the start of this year’s season, Cuban meteorologist José Rubiera prefers to discuss the importance of reducing the country’s vulnerability and improving preparedness.

By Ivet González
Houses with sturdy masonry walls and reinforced concrete roofs, looking like they could survive any tropical storm or hurricane, are sprouting up on the outskirts of this city in central Cuba, thanks to the development of local production of construction materials.

By Patricia Grogg
"Adaptation to climate change is urgent and must be part of development," said Bárbara Pesce-Monteiro, the United Nations resident coordinator in Cuba, assessing the damage done by hurricane Sandy in the eastern region of the country.

By Patricia Grogg
You can still see broken plates, toys, books and some photographs among the rubble that was once the homes of Rey Antonio Acosta’s family and other families in Mar Verde, the beach community where Hurricane Sandy made landfall in this eastern Cuban city.

By Patricia Grogg
As the Caribbean reaches the end of October – the second-to-last month of the Atlantic hurricane season – Sandy has caused significant material losses and claimed the lives of 44 people in Haiti, 11 in Cuba, two in the Dominican Republic, one in Jamaica and one in the Bahamas.

By Patricia Grogg
The impact of Hurricane Isaac as it made its way through the Caribbean region highlighted both the fragility of some countries in the face of extreme meteorological events, which are expected to become more and more intense, and the different strategies adopted to mitigate the risk of disasters.
ADVERTISEMENT ADVERTISEMENT