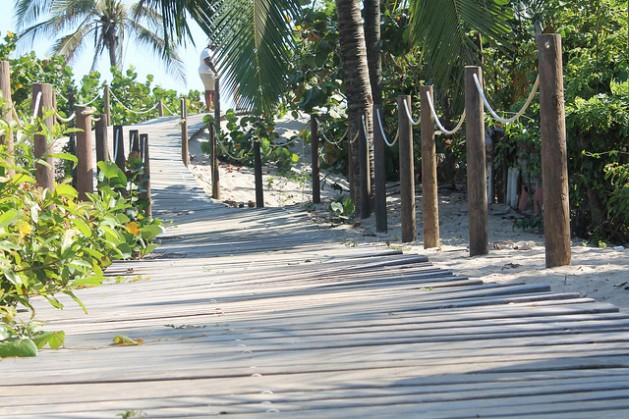 One of the walkways built by the community of Santa Rosa de Aguán to connect the local houses with the beach to preserve the sand dunes. Credit: Thelma Mejía/IPS

SANTA ROSA DE AGUÁN, Honduras , Mar 26 2014 (IPS) - At the mouth of the Aguán river on the Caribbean coast of Honduras, a Garífuna community living in a natural paradise that was devastated 15 years ago by Hurricane Mitch has set an example of adaptation to climate change.

“We don’t want to make the sea angry again, we don’t want a repeat of what happened with Mitch, which destroyed so many houses in the town – nearly all of the ones along the seashore,” community leader Claudina Gamboa, 35, told IPS.

Around the coastal town of Santa Rosa de Aguán, the stunning landscape is almost as pristine as when the first Garífunas came to Honduras in the 18th century.

The people who came from the sea

The Garífunas make up 10 percent of the population of 8.5 million of Honduras, which they reached over two centuries ago.

The Garífunas are descendants of Africans captured and brought to the region by European slave ships that sank in the 17th century off the island of Yarumei – now St. Vincent – where they settled and intermarried with native Carib and Arawak people.

From St. Vincent, which was under British dominion, they were expelled in 1797 to the Honduran island of Roatán. Later, the Spanish colonialists allowed them to move to the mainland, and they spread along the Caribbean coast of Honduras and other Central American countries.

To reach Santa Rosa de Aguán, founded in 1886 and home to just over 3,000 people, IPS drove by car for 12 hours from Tegucigalpa through five of this Central American country’s 18 departments or provinces, until reaching the village of Dos Bocas, 567 km northeast of the capital.

From this village on the mainland, a small boat runs to Santa Rosa de Aguán, located on the sand in the delta of the Aguán river, whose name in the Garífuna language means “abundant waters.”

Half of the trip is on roads in terrible conditions, which become unnerving when it gets dark. But after crossing the river late at night, under a starry sky with a sea breeze caressing the skin, the journey finally comes to a peaceful end.

A three-year project to help the sand dunes recover, which was completed in 2013, was carried out by the United Nations Development Programme (UNDP) through the Global Environment Facility’s (GEF) Small Grants Programme, with additional support from the Swiss Agency for Development and Cooperation (SDC).

The project sought to generate conditions that would enable the local community to adapt to the risks of climate change and protect the natural ecosystem of the dunes.

The initiative enlisted 40 local volunteers, almost all of them women, who went door to door to raise awareness on the importance of protecting the environment and to educate people about the risks posed by climate change.

“They called them crazy, and thought the people working on that were stupid, but I asked them ‘don’t stop, just keep doing it.’ Now there is greater awareness and people have seen the winds aren’t hitting so hard,” Atanasia Ruíz, a former deputy mayor of the town (2008-2014) and a survivor of Hurricane Mitch, told IPS.

She and Gamboa said the women played an essential role in raising awareness on climate change, and added that thanks to their efforts, the project left an imprint on the white sand and the local inhabitants.

People in the community now understand the importance of protecting the coastal system and preserving the dunes, and have learned to organise behind that goal, Gamboa said. “It’s really touching to see the old women from our town picking up garbage for recycling,” she said.

The sand dunes act as natural protective barriers that keep the wind or waves from smashing into the town during storms.

“When the sea got mad, it made us pay. When Mitch hit, everything here was flattened, it was just horrible,” Gamboa said.

Some people left town, she said, “because we were told that we couldn’t live here, that it was too vulnerable and that the sea would always flood us because there was no way to keep it out.

“But many of us stayed, and with the knowledge they gave us, we know how to protect ourselves and our town,” she said, proudly pointing out how the vegetation has begun to grow in the dunes.

In late October 1998, Hurricane Mitch left 11,000 dead and 8,000 missing in Honduras, while causing enormous economic losses and damage to infrastructure.

Santa Rosa de Aguán was hit especially hard, with storm surges up to five metres high. The bodies of more than 40 people from the town were found, while others went missing.

The effort to recover the sand dunes along the coast included the construction of wide wooden walkways to protect the sand.

In addition, the remains of cinder block houses destroyed by Mitch were finally removed, to prevent them from inhibiting the natural formation of dunes.

The project also introduced recycling, to clear garbage from the beach and the sandy unpaved streets of this town, where visitors are greeted with “buiti achuluruni”, which means “welcome” in the Garífuna language.

Lícida Nicolasa Gómez is an 18-year-old member of the Garífuna community who prefers to be called “Alondra”, her nickname since childhood.

“I loved it when they invited me to the dunes and recycling project, because we were deforesting the dunes, hurting them, destroying the vegetation, but we’re not doing that anymore,” she said.

“We even made a mural on one of the walls of the community centre, to remember what kind of town we wanted,” she added, with a broad smile. 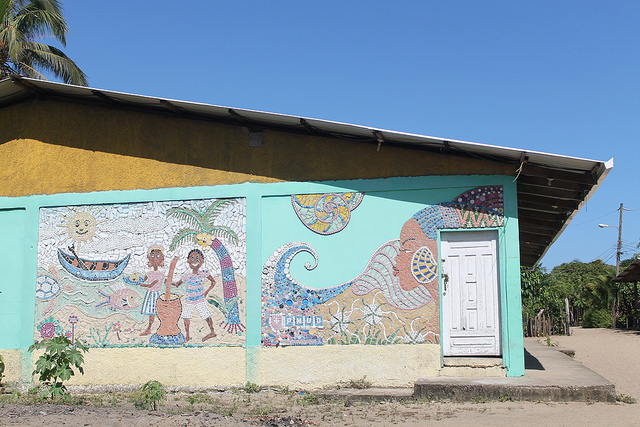 The mural of scraps of plastic and other recyclable materials made on the community centre wall by the people of Santa Rosa de Aguán to celebrate their way of life and the beauty of Garífuna women, and remind the town of the need to mitigate climate change. Credit: Thelma Mejía/IPS

The mural includes scraps of plastic, metal, tiles and bottle tops. It reflects the beauty of the Garífunas, showing people fishing, crops of mandioc and plantain, and the sea and bright sun, while reflecting the desire to live in harmony with the environment.

The sand dunes are up to five metres high in this small town at the mouth of a river that runs through the country’s tropical rainforest.

For this community built between the river and the sea, flooding is one of the main threats to survival, said the representative of the GEF programme.

Ricardo Norales, 80, told IPS that, although the sand dunes and vegetation are growing, “the location of our community means we are still exposed to inclement weather.

“With the project, we saw how the wind and the sea don’t penetrate our homes as much anymore. But we need this kind of aid to be more sustainable,” he said.

The history of Santa Rosa de Aguán is marked by the impact of tropical storms and hurricanes, which have hit the town directly or indirectly many times since it was founded.

But the sand dunes are once again taking shape along the shoreline, where the community has built walkways to the sea.

Local inhabitants want their town to be seen as an example of adaptation to climate change and the construction of alternatives making survival possible. Several of them said they did not want an “ayó” – good-bye in Garífuna – for their community.