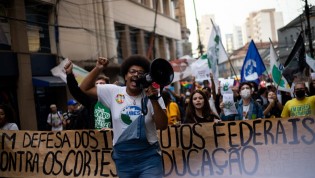 By Fabíola Ortiz
Residents of the small community of Rio dos Macacos, made up of descendants of slaves in the northeastern Brazilian state of Bahia, reported to United Nations bodies that they were attacked by military personnel from the Aratu naval base, which occupies part of their land.

By Patricia Grogg
From a very young age, Irma Castañeda has braided her curly hair and cared for it with natural recipes inherited from her mother, ignoring the widespread conception that black women’s hair is “ugly” or “bad”.

By Fabiana Frayssinet
A Nigerian diviner dances and sings next to a Brazilian priest of the Candomblé religion, brought to this South American country by African slaves, that is now being rescued from oblivion in school texts on national history and culture.

By Fabiana Frayssinet
If a black woman and a white woman both need emergency obstetric care, a Brazilian doctor will assist the white woman because of the stereotype that black women are better at handling pain and are used to giving birth.
ADVERTISEMENT ADVERTISEMENT