RIO DE JANEIRO, Nov 22 2012 (IPS) - A Nigerian diviner dances and sings next to a Brazilian priest of the Candomblé religion, brought to this South American country by African slaves, that is now being rescued from oblivion in school texts on national history and culture.

He is Jokotoye Awolade Bankole, a 55-year-old tribal prince from Onpeu-Ogbomoso in the southwestern Nigerian state of Oyo, and a devotee of Ifa, a divination system of the Yoruba people that was declared part of the Intangible Cultural Heritage of Humanity in 2005 by the United Nations Educational, Scientific and Cultural Organisation (UNESCO).

Candomblé priest Alexander Rocha da Silva, or “Alexander de Oxossi” as he is known in his religion, has welcomed Bankole to his “terreiro” or temple. He is white, although as he told IPS, “who in Brazil can say he has nothing of Africa under his skin?” 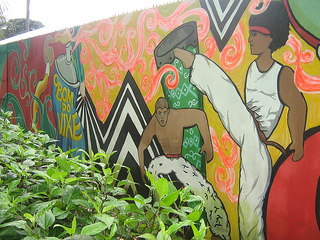 Half of the Brazilian population is black or mixed-race. Graffiti on a wall at the Bom Jardim Cultural Centre in Fortaleza. Credit: Mario Osava/IPSBrazil

This country, where over 50 percent of the population of 194 million identify themselves as black or “mulatto” in the census, has emphasised its European history, the Portuguese “conquest” and the practice of the Catholic religion.

According to the 2010 census, 64.6 percent of the population identify as Catholics, followed by 22.2 percent who profess evangelical, mainly neopentecostal, denominations.

Many of those who openly declare themselves to be followers of religions of African origin, like Umbanda and Candomblé, who represent 0.3 percent of the population, practise their rituals in the shadows.

“There is still a lot of discrimination, especially when someone at school or at university professes an African religion,” says Glaucia Bastos, an “iyanifa” (Ifa priestess).

Brought to Brazil by African slaves, Candomblé was subjected to more or less severe repression from colonial times, and had to disguise itself in order to survive.

“Candomblé did not suffer as much from the Catholic influence as other religions, because black people continued to worship their ‘orixás’ (deities) under the guise of Catholic saints,” Alexander de Oxossi told IPS.

Open persecution by the police of Afro-Brazilian religions continued past the mid-20th century.

Bastos, whose father is Portuguese but who identifies herself as black “because of her mother’s family tree,” tells IPS that “up until 27 years ago, people in the streets used to shout ‘macumbera’ at me,” a word of African origin used pejoratively to mean a practitioner of black magic.

Edna Teixeira de Araujo told IPS that until around 1970, Candomblé was practised in the backyards of samba – an Afro-Brazilian musical rhythm – houses. “There would be a samba dance circle in the front, and Candomblé would be going on behind, to keep it hidden,” said de Araujo, who like other participants at this celebration in honour of Bankole was wearing a festive Nigerian Yoruba gown.

But times changed, and federal law 7,716, which stipulates that religious intolerance amounts to racism, no longer permits open demonstrations of prejudice.

In 2007, Jan. 21 was named the annual National Day Against Religious Intolerance in memory of Mãe Gilda, a Candomblé priestess from the Northeast state of Bahia who died in 2000 from heart problems blamed on religious persecution by neopentecostal churches.

But in spite of the signs of progress, devotees of Afro-Brazilian religions still feel persecuted.

“Even today, any problem that arises is blamed on a curse by Candomblé or Umbanda practitioners,” de Araujo said.

Bankole, who is from a region of Nigeria that was decimated by the slave trade up to little more than a century ago, came to Brazil to help build respect for Afro-Brazilian religions.

Through an interpreter, Bankole told IPS that due to slavery, many Africans from different parts of the continent experienced the mixing or loss of their customs in Brazil, including their tribal languages and Ifa, which he is now trying to revive.

That was the aim of the lecture on “Memory, Ancestors and Identity in the African Context” that he delivered on Nov. 13 in Yoruba, a language spoken by 10 million people in Africa.

The event was organised by the “coordinating body of experts in education for ethnic and racial relations”, which trains teachers to apply the 2010 law that requires the study of African history and the Brazilian black community at all levels in the public and private education system in Brazil.

Bankole is optimistic because he has found on his travels that many other forms of awareness of African ancestry persist in Brazil and other Latin American countries, including orixá worship in Candomblé.

“And even Brazil’s carnival bears the imprint of African culture,” Bankole said, smiling.

Bastos, whose roots rejoined Africa when she married Edundayo Olalekan Awe, a Nigerian who was acting as interpreter for Bankole, again took trees as a metaphor to refer to cultural and religious mixing in Brazil.

“It’s the same tree, and everyone has planted it as he or she wishes,” she said.

Like a tree with different roots, the “xirê” – drumming and singing for the orixás – mingles in the terreiro of Alexander de Oxossi, the priest or “doté”, with the flavours of the foods to be offered to the orixás, prepared by Iya Rosana de Bessem, like acarajé, a typical dish from Bahia.