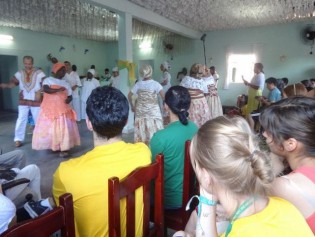 By Fabiana Frayssinet
At odds since colonial times, Catholicism and Afro-Brazilian religions have embarked on a process of mutual acceptance. Pope Francis added words and gestures to this reconciliation of two groups that share a common interest: confronting the growth of evangelical and neo-Pentecostal churches.

By Fabiana Frayssinet
A Nigerian diviner dances and sings next to a Brazilian priest of the Candomblé religion, brought to this South American country by African slaves, that is now being rescued from oblivion in school texts on national history and culture.
ADVERTISEMENT ADVERTISEMENT