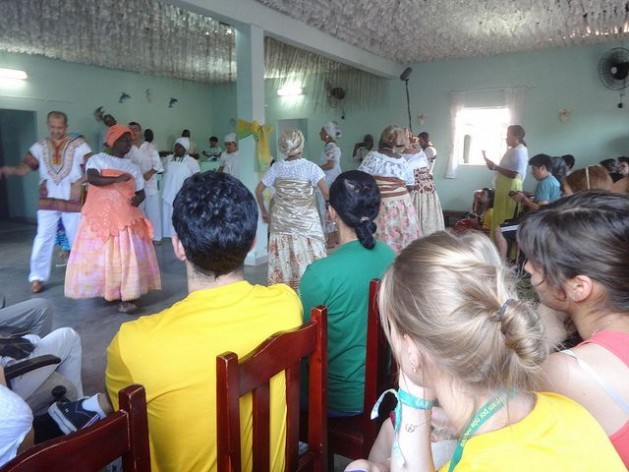 RIO DE JANEIRO, Jul 30 2013 (IPS) - At odds since colonial times, Catholicism and Afro-Brazilian religions have embarked on a process of mutual acceptance. Pope Francis added words and gestures to this reconciliation of two groups that share a common interest: confronting the growth of evangelical and neo-Pentecostal churches.

The photo of Francis wearing a “cocar” headdress given to him by Ubiraí, a Pataxó Indian, went around the world.

Ivanir dos Santos, a “babalawo” or priest of the Afro-Brazilian candomblé religion, was also received by the pope in the Municipal Theatre of Rio de Janeiro as part of the rapprochement between the Catholic Church and other creeds and cultures during his Jul. 22-28 visit to Brazil.

“For the first time, a representative of candomblé was received by a pope. This is unprecedented,” dos Santos, a member of Brazil’s Committee Against Religious Intolerance (CCIR), told IPS.

“When the pope stands up for the secular state, which guarantees religious freedom and prevents persecution, he is being very pragmatic." -- Maria Celina D'Araujo

“It was a very important step. It marked a gesture of respect for Afro-Brazilian and minority religions,” he said.

That day, the pope called for inter-religious dialogue and surprised politicians, among other invited guests, with a declaration in favour of the secular state.

“Peaceful coexistence between different religions is favoured by the laicity of the state, which, without assuming any one confessional stance, respects and values the presence of the religious factor in society,” he said.

Francis probably had two audiences in mind, according to political analyst Maria Celina D’Araujo, a professor in the social sciences department at the Pontifical Catholic University in Rio de Janeiro.

On the one hand, “the most fundamentalist Islamic sectors, Islamic theocratic states, where Christians and the Catholic Church have been persecuted, as in Egypt,” D’Araujo told IPS.

But on the other hand, the message was also for Latin America, particularly Brazil, where “evangelical fundamentalism is growing and has strong political participation,” she said.

In a survey by the Datafolha polling firm on the eve of Francis’ arrival, 57 percent of respondents declared themselves Catholics, compared to the 64 percent who identified themselves that way in 2007, when his predecessor Benedict XVI (2005-2013) visited the country.

The proportion of interviewees describing themselves as Pentecostal evangelicals, meanwhile, rose from 17 to 19 percent, while non-Pentecostal Protestants increased from five to nine percent.

A similar phenomenon is occurring in other parts of Latin America, although Catholicism remains the dominant faith.

Evangelical and neo-Pentecostal denominations have also grown in terms of political influence. D’Araujo estimates evangelical forces in Congress at 30 percent, holding decisive sway over congressional votes to do with reproductive rights, sexual minorities or the decriminalisation of abortion.

“When the pope stands up for the secular state, which guarantees religious freedom and prevents persecution, he is being very pragmatic. The Catholic Church knows it is losing ground, and will not be able to grow with fundamentalist, intolerant parties in power,” the analyst said.

A meeting ahead of World Youth Day shed light on the Catholic position on religious freedom and diversity.

At the “terreiro” (temple) of Axé Bamgbosè, in the municipality of Duque de Caxias, candomblé priests including dos Santos gathered with Jesuit priests, seminarians and young people from different parts of the world.

At the meeting, which IPS attended, the Jesuits heard theological explanations about candomblé from representatives of this religion brought to Brazil from West Africa by slaves, and repressed during colonial times by the Jesuit order, to which Francis belonged until he became pope.

The Catholics visited the shrines of the “orixás” or minor gods or spirits, and even watched a ceremony of African origins.

“For me, as for others, this discovery of religions, other creeds and viewpoints, other spiritualities, is a new thing. Probably 50 or 60 years ago they were hidden or forbidden. When the Americas were colonised, they were also banned and denied,” Sergio Montes, a Jesuit from Bolivia who took part in the ceremony, told IPS.

In Brazil, followers of African religions like candomblé or umbanda were persecuted, often violently, down the centuries, until a law permitting police repression of their ceremonies was repealed in 1970.

Today Afro-Brazilian religions are still persecuted, but by the neo-Pentecostal churches that call them “satanic cults”. Catholicism is also attacked by the same groups.

“The neo-Pentecostals do not respect different beliefs; they think they own the truth, they talk as if God speaks only to them. That is fascism. We cannot generalise, but many of these segments are very bad for democracy in Latin America and Brazil,” dos Santos said.

The Catholic Church’s openness is not entirely new. “The Society of Jesus throughout its history has been opening doors in what we now call inter-religious dialogue,” Montes said.

He cited, for example, the Jesuit missions in what are now Argentina, Bolivia, Brazil and Paraguay, as well as the order’s historical ties with China.

“For the Society of Jesus this is not a novelty, although the context is new,” he said.

Montes said this is a propitious time to put into practice guidelines that were proposed at the Second Vatican Council (1962-1965) and that “are beginning to take shape.”

Inter-cultural and inter-religious dialogue have advanced in Latin America since then, especially at the episcopal conferences at Medellín, Colombia (1968), Puebla, Mexico (1979), Santo Domingo, Dominican Republic (1992) and Aparecida, Brazil (2007).

“Much emphasis has been placed on the possibility of getting to know and recognise each other, respecting rather than only tolerating each other, with a powerful vision of the fact that what is important is the humanity that unites us,” said Montes.

“Pope Francis has opened a very important door not only for the Church, but also for all religions and for the whole of humanity,” he said.

Dos Santos agreed. “It is time to unite in respect for diversity and against intolerance,” he said.

And from a religious viewpoint, the babalawo said he had hope.

“Not only the world changes. Religions must change too. And I think we are seeing new signs now,” he said.