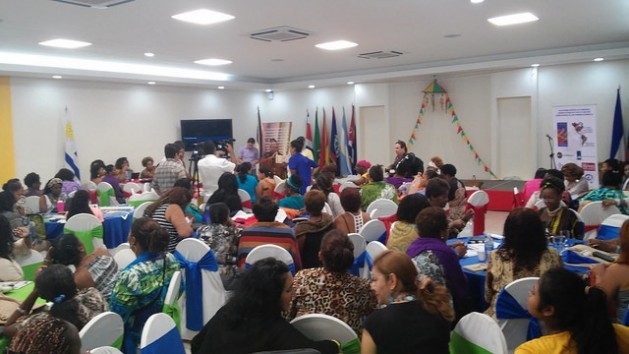 Delegates to the first Summit of Women Leaders of African Descent of the Americas taking part in one of the working groups organised during the three-day gathering held Jun. 26-28 in Managua, Nicaragua. Credit: José Adán Silva/IPS

MANAGUA, Jun 29 2015 (IPS) - They say they are tired of waiting for justice after centuries of neglect and contempt due to the color of their skin. Black women leaders from 22 countries of the Americas have decided to create a political platform that set a 10-year target for empowering women of African descent and overcoming discrimination.

“We’re going to fight with all of our strength to break the chains of racism and racially-motivated violence,” Shary García from Colombia told IPS at the end of the first Summit of Women Leaders of African Descent of the Americas, which drew 270 delegates to Managua Jun. 26-28.

García said the three days of debates in the Nicaraguan capital gave rise to the Political Declaration of Managua, whose 17 demands and central themes are aimed at eradicating discrimination based on a combination of racial and gender reasons in the Americas.

“It wasn’t easy to sum up in 17 ideas the complaints and demands of 270 women and their families, who have experienced discrimination, violence and the denial of their rights all their lives. But each and every one of us who came here knows that this is how the beginning of the end of discrimination starts.”

Altagracia Balcácer from the Dominican Republic told IPS that the 17 main themes are cross-cut by concepts like fighting racism, demanding a decent life and anti-poverty policies, demanding the right to make decisions about the future, and freedom of choice regarding sexual and reproductive rights.

“The demands include halting violence towards black women, giving the population of African descent visibility in the national statistics and census, protecting black children and adolescents, and offering opportunities to youngsters in this population group,” she said.

Other concerns, she said, are “protecting the environment, expanding access to natural and economic resources, and guaranteeing food security and sovereignty.”

In addition, the delegates called for “protection and decent treatment of immigrants, salvaging and acknowledging our cultural heritage, respect from the media, the non-stigmatisation of black people, expanding access to justice and guaranteeing safety for women and their communities.” The Jun. 26 opening of the first Summit of Women Leaders of African Descent of the Americas Américas, when ended two days later in Managua with a declaration outlining the next decade of struggle for their rights. Credit: Courtesy of RMAAD

Dorotea Wilson, general coordinator of the Network of Afro-Latin American, Afro-Caribbean and Diaspora Women (RMAAD), told IPS that the document does not demand the recognition of rights, but the enforcement of all treaties, laws and international conventions referring to black women that have been signed since the 2001 World Conference against Racism held in Durban, South Africa.

The Political Declaration of Managua “is not an expression of good intentions; it is an official document demanding the implementation of public policies in all countries of the Americas…to start once and for all to recognise and give their rightful place to the black populations on the continent,” said Wilson, from Nicaragua.

“With this platform, our aim is to move towards compliance with all of our rights in the context of the U.N. International Decade for People of African Descent,” added the head of the Managua-based RMAAD, which is active in 24 countries.

In January the United Nations General Assembly proclaimed 2015-2024 as the International Decade for People of African Descent, to promote respect for their rights and freedoms and greater knowledge of and respect for their diverse heritage and cultures.

According to the U.N., some 200 million people in the Americas identify themselves as being of African descent.

Wilson explained that over the next decade, black women in Latin America will document, with clear, reliable indicators, the real situation of people of African descent. They also hope to see poverty levels drop.

“We say ‘reliable’ because we don’t exist in the existing statistics, we’re invisible,” said Wilson. “Another of the summit’s achievements is that in each country in the Americas we will set up an observatory to follow up on the demands set forth here.”

To that end, they have technical and institutional support from U.N. agencies, European donor countries, non-governmental organisations, and defenders of human rights and gender rights.

They will also try to get their list of demands accepted by the Organisation of American States (OAS). Dorotea Wilson of Nicaragua, the head of the Network of Afro-Latin American, Afro-Caribbean and Diaspora Women, during a working session in the summit held in Managua. Credit: Courtesy of RMAAD

The idea, said Wilson, is to press countries to design public policies targeting women and people of African descent, and to create follow-up mechanisms to make it possible to gauge the progress made by the time the next summit is held five years from now.

The head of RMAAD said the women who took part in the summit made it clear that there is a perception that police brutality and violence in general against black people are on the rise, especially in the United States and Brazil, two of the countries that were represented in the summit.

“Hate crimes in the United States make the international headlines,” Wilson said. “But because the population of African descent is invisible in Latin America, racially-motivated killings in the region do not come to public attention.”

As a panelist in the forum on human rights, Nilza Iriaci said that “in my country, Brazil, hate crimes happen every day, but there is no sense of scandal.” Brazil is the Latin American country with the largest black population.

A 2010 study by the United Nations Development Programme (UNDP), “Afrodescendant Population of Latin America”, which was updated two years later, found that despite the creation of new legal frameworks and institutions to protect the rights of people of African descent in the region, most of the black population lived in poverty and suffered from discrimination.

Vicenta Camusso, a representative of black women in Uruguay, said things had not changed since the study was carried out. “It’s the same as always – our rights and the poverty we suffer have not improved one bit,” she told IPS.

She said that although every country in the region has legal frameworks protecting the rights of women and blacks, no specific budget funds are allotted.

“Partly because of this, most black women continue to live in inferior living conditions compared to women of other races, and young black people experience the same exclusion and violence as the older generations did,” she said.

“Since Durban, little to nothing has changed for women of African descent in the Americas,” 7she complained. “More than 80 percent of black people in the region live in a state of poverty and social inequality, with few opportunities for improvement, because of ethnic-racial reasons.”

Camusso pointed out that the 2001 global conference emerged from official efforts by the international community to design actions aimed at fighting racism, racial discrimination, ethnic conflicts, and associated violence.