HAVANA, Sep 21 2010 (IPS) - Cuban women have to work twice as hard as men to get ahead in their careers. But things are even tougher for black women in Cuba, although discrimination by reason of gender or skin colour is prohibited by law and by the constitution itself. 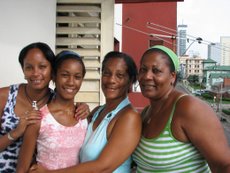 Maritza Rodríguez (right), with a colleague and her daughters. Credit: Patricia Grogg/IPS

“My mother, who was a simple farm worker, used to always say to my sisters and me: ‘You girls have to study hard to show everyone you can be just as good as any white boy or girl in whatever you choose to do.’ And that’s exactly what I tell my daughter now,” Maritza Rodríguez, a 51-year-old elementary and high school history teacher, told IPS.

She said she has never felt less than anyone else, not even when she feels the eyes of all the sales staff on her as she looks around a store. “They look at me suspiciously because I’m black and I’m not all dressed up; it doesn’t occur to them that I’m a professional. That’s a form of discrimination,” she said.

Like most people in Cuba, Rodríguez was severely affected by the economic crisis of the 1990s, brought on by the fall of the Soviet Union and the East European socialist bloc, Cuba’s main aid and trade partners. But she doesn’t dwell on that. She does complain, however, about the lack of opportunities she as a black woman has to get ahead in her profession.

“In 2005 I completed a master’s degree, and now I’d like to write a book,” she said. But her ambition alone is not enough to overcome financial difficulties, poor access to sources, and a limited network of contacts. “In that sense I feel marginalised as a woman and as an Afro-Cuban. I don’t see many black women writers in Cuba; most female writers here are white,” she said.

More than 60 percent of the 11.2 million people of this Caribbean island nation are of African or mixed-race descent, according to studies by Esteban Morales, an academic who specialises in racial issues.

Racial inequality in Cuba was for many years a taboo issue, and it is only recently that people have begun to talk openly about it. Public debate was prompted by calls by the Cofradía de la Negritud (roughly, ‘The Black Guild’), a project that seeks to raise awareness about the problem. One of its most recent workshops focused precisely on the double discrimination faced by black women in Cuba.

The Cofradía de la Negritud is also attempting to address the lack of proper media coverage given to race issues, as well as the lack of a gender perspective.

This may explain the surprised reaction by many of the participants in the late August workshop to Desiderio Navarro’s presentation on the portrayal of Afro-Cuban women in advertising.

Navarro, a writer and cultural activist, used images to illustrate what he argues is a racist ad campaign designed to attract foreign tourists to Cuba through post cards, posters and billboards showing young black women on the beach. The scantily-clad women in the images are always on their own; for Navarro, an underlying suggestion — and the key part of the message conveyed — that these women are available.

“Afro-Cuban women took advantage of the opportunities afforded by the (1959) revolution, and we now see them engaged as professionals in every area, including education, health, science, and culture,” but in advertising they are being “sold” as sex objects, Cuban art critic and writer Inés María Martiatu told IPS.

Mayra Espina, a psychologist and writer who works at the Psychological and Sociological Research Centre, said that several studies concur that the 1990s crisis aggravated poverty and social inequalities.

Black Cubans are more likely than their peers of European descent to live in poor housing conditions and earn low incomes, she pointed out. Women in general and Cuba’s eastern provinces are also more acutely affected by the gap in socio-economic conditions.

Some of the participants in the workshop said Afro-Cubans are always at a disadvantage and that more than half a century of social change under the socialist government has done little to erase social differences, which date back to colonial times, when the population was divided between white slave-owners and African slaves.

Espina said that Cuba’s social policies are “universalistic” in nature, and that there was never an attempt to specifically address the prejudice and discrimination faced by any group in particular, on the argument that such an approach only serves to perpetuate stigmatisation and inequalities.

But, “exactly the opposite has happened, as extremely egalitarian policies have not been able to overcome the enormous inequality we started out with” in terms of discrimination, she said.

Espina agreed with Morales — who has written several essays on the issue of race — that affirmative action is needed to tackle inequalities rooted in a person’s gender, skin colour or the area they live in. The particular problems of each group must be addressed, she said.

According to Espina, gender, race and social class are intricately connected sources of discrimination. Thus, she says, “It is not enough to provide free education for all; more funding and greater quality education must be made available to the most vulnerable groups and to those living in the worst conditions.”

In a recent article, Morales said that Cuba would benefit from an affirmative action approach to development, aimed at eliminating the disadvantages faced by the black and mixed-race populations and other disadvantaged groups.