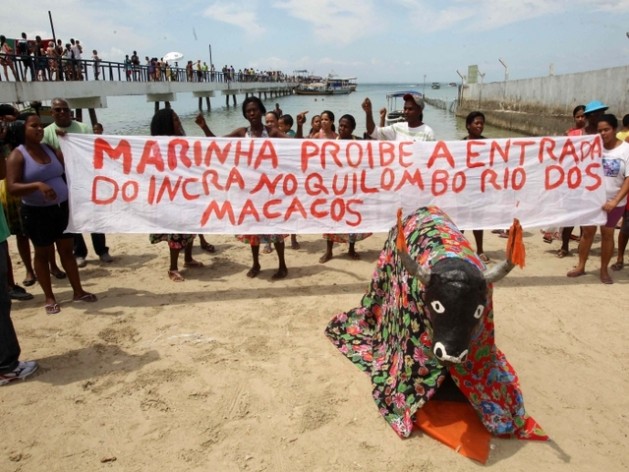 A protest by the residents of Rio dos Macacos against the occupation of their land and violations of their rights by the Aratu naval base. Credit: Coha.org

RIO DE JANEIRO, Jan 14 2014 (IPS) - Residents of the small community of Rio dos Macacos, made up of descendants of slaves in the northeastern Brazilian state of Bahia, reported to United Nations bodies that they were attacked by military personnel from the Aratu naval base, which occupies part of their land.

Ednei dos Santos, one of the leaders of the quilombo – the term given to remote communities in Brazil originally founded by runaway or freed slaves – and his sister Rosimeire say they were beaten by members of the navy on Jan. 6, in front of her daughters, before they were detained.

Ednei dos Santos, 28, told IPS that the incident was just the latest of the frequent threats and intimidation against the 70 families living in the quilombo.

On Friday, Jan. 10, human rights groups presented the case to the U.N. Working Group of Experts on People of African Descent and three U.N. special rapporteurs. They are also preparing to file a complaint with the Inter-American Commission on Human Rights (IACHR).

The families of Rio dos Macacos have been struggling for five decades to gain legal title to their land, which is located on the São Tomé de Paripe peninsula on the fringes of the municipalities of Simões Filho and Salvador, the capital of Bahia.

There is evidence that the quilombo has existed for 150 years, and indications that slaves took refuge on the land there as early as 238 years ago.

In Brazil, slavery was not abolished until 1888, decades after the country’s independence from Portugal, in 1822.

The 300-hectare area has been at the centre of a legal dispute since the 1960s, when the navy built a base there as well as a village for the families of navy personnel, during the 1964-1985 military dictatorship.

Two years ago, the courts ruled in favour of the community’s claim to the land, but the state appealed the sentence.

In the meantime, the quilombolas – as the residents of quilombos are known – have to walk or drive through the navy village to reach their community.

“The violence is constant; they stop us from coming and going – even ambulances are frequently kept from reaching the community to provide medical assistance,” Ednei dos Santos said.

He and his 35-year-old sister said they were hit, punched and threatened with firearms by navy personnel. She said she was also the victim of sexual assault.

The incident began when they were accosted by military personnel from the navy village as they drove back from a nearby town, where they had registered Rosimeire’s two daughters, aged six and 17, for the coming school year.

“A sergeant, who had already threatened us before, and five other armed men, smashed open the door to my car and started to hit me,” Ednei said. “They also hit my sister, until leaving her partly undressed. The girls were terrified.”

Ednei and Rosimeire dos Santos were detained, and were only allowed to leave when officials from the government’s Special Secretariat for Policies on Promotion of Racial Equality and lawyers from Afro-Brazilian movements showed up.

The Aratu naval base happens to be a favourite vacation spot for Brazilian presidents to spend the year-end holidays. President Dilma Rousseff was there until Jan. 5, the day before the incident reported by the dos Santos.

“We don’t trust the government anymore,” Rosimeire dos Santos, who was hospitalised after the attack, told IPS. “People don’t understand that in today’s Brazil, torture is still occurring, just like in times of slavery. We are still fighting for our freedom.

“I don’t go out with my daughters anymore because I’m afraid that they’ll kill me in front of them. They told us that when they were out of uniform, they were going to burst open our heads with bullets.

“Two men got on top of me, one of them put my head between his legs, with my pants down and my breasts uncovered. It was total humiliation; holding a gun to my head they spit on my face,” said an anguished Rosimeire.

She warned that people could get killed in Rio dos Macacos if the routine violence the residents face isn’t brought to a halt.

“Our territory is not for sale, we’re not going to swap it and it’s not up for negotiation. I was born and raised here, and this is where my mother has our family buried,” she said, with emotion.

A report completed in August 2012 by the National Institute of Colonisation and Agrarian Reform confirmed that residents of the community were descendants of slaves from plantations that produced sugar for the Aratu mill in colonial times.

But despite the fact that the Brazilian constitution specifies that quilombos are entitled to collective ownership of the land they have historically occupied, the community of Rio dos Macacos has not yet been issued title to their 300 hectares.

In October 2012, a federal court ruled that the navy must pull out of the area. But the ruling has been appealed by the state.

Meanwhile, the public defender’s office demanded on Jan. 8 that the navy urgently clarify the incident involving the dos Santos.

The next day, a group of social movements issued a statement deploring the attacks on the community and defending legal recognition of the quilombo and the local residents’ right to their land

It also demanded that a road be built so residents could go in and out of the quilombo without having to pass through the navy village, to avoid the aggressive military control over access to the community.

On Jan. 10, three of the organisations filed complaints about the incident to three U.N. special rapporteurs – in the Field of Cultural Rights, on the Right to Adequate Housing, and on the situation of Human Rights Defenders – as well as to the Working Group of Experts on People of African Descent, which visited Brazil in December.

“In the community you can’t tell that the military dictatorship is over,” Marisa Viegas, a lawyer with Justiça Global, one of the human rights groups that brought the complaints, told IPS. “The military continue to use repression against the local residents, who are unable to achieve minimal living conditions.”

Her organisation has been assisting the Rio dos Macacos community for the past decade.

According to Viegas, two activists who defend the human rights of the quilombolas were attacked.

She said cultural and housing rights and freedom are under attack in the community, and the quilombolas are not allowed to freely move about, receive visitors or build decent housing.

Pointing out that the constitution guarantees the quilombolas’ right to their land, the activist said that “in practice the contrary is happening, with people being pressured to leave.”

Viegas said the state has failed to live up to international commitments to not violate, and to not tolerate violations of, the rights of residents of communities like the quilombos.

“In this case it is the state itself committing the violations, which is doubly serious,” she said.

A communiqué issued by the navy stated that an investigation of the complaint filed about the incident involving the dos Santos was being carried out with support from the public prosecution service, “to determine what happened, and the circumstances and responsibilities.”

The institution also stated that the inquiry would be conducted “with transparency and in an impartial manner.” It added that the military personnel accused of attacking the dos Santos had been temporarily suspended.