ELDORADO, Brazil, Jul 12 2008 (IPS) - The juçara, a palm tree in danger of becoming extinct due to over-exploitation of its edible heart, is beginning to recover thanks to sustainable management by the Afro-Brazilian communities of the Atlantic tropical forest, Brazil’s most deforested biome. 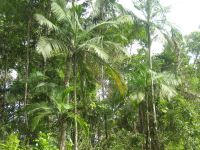 Palm trees on a hill of the Ivaporunduva quilombo. Credit: Mario Osava/IPS

“I began cutting palm at age seven with my father, the first ‘palmiteiro’ of Eldorado,” says Antonio Jorge, now 63, and a student of social sciences through a university distance-learning programme.

“We did it out of necessity and lack of knowledge,” he admits. But, since 1990, he said, they have been planting juçara instead of cutting it in order to use only its edible bud, the heart, or palmito, which is in high demand on the market.

This turnaround occurred in recent years in the Brazilian communities that descended from African slaves in the Ribeira river valley, a basin of 28,306 square kilometres between two industrial cities in the south, São Paulo and Curitiba, and which constitutes the largest preserved area of the Atlantic tropical forest, a coastal ecosystem that has already lost 93 percent of its tree cover.

These communities are known as “quilombolas”, emerging from the former “quilombos”, enclaves of blacks who escaped slavery and fought for their freedom in centuries past.

A project of the non-governmental Socio-Environmental Institute (ISA) buys juçara seeds gathered by the quilombolas at 1.87 dollars per kilogramme for cultivation in their own lands. ISA promotes sustainable development policies, working with traditional communities and defence of natural resources in the Ribeira valley.

In Ivaporunduva, the oldest quilombo in the valley, 13 youths and adults climbed two hills on Jun. 26 carrying sacks full of seeds on their backs to plant in the forest. It was a “mutirão”, an indigenous word used today to describe any community effort that is exceptional and voluntary.

Planting has to take place in forested areas because the juçara, whose scientific name is Euterpe edulis martius, needs shade in its early lifetime, and patience, because it takes about eight years to produce fruit and a good palm heart.

Silvestre Rodrigues da Silva, a 63-year-old father of five, contributed 250 kg of seeds gathered by his family for the “mutirão”, earning 468 dollars. He was lucky to have preserved hundreds of palms near his house. “I never imagined that their seeds could produce this money. For me, the juçara was just beauty and bird food,” he said.

Some communities are growing seedlings in nurseries as another source of income. They are also discovering the benefits of the fruit, whose pulp has nutritional value similar to that of the açaí, an Amazonian palm of the same family that has already conquered a large market share as an energy source.

The fruit “provides more money than the palm heart,” says Da Silva, based on a visit he made to a pulp factory in Sete Barras, a nearby town. “If we bring together all of the palms available we could have an industry too,” he predicts.

In Ubatuba, a coastal town in São Paulo state, some 400 km from the Ribeira valley, a project of the Institute of Permaculture and Ecovillas of the Atlantic Forest (IPEMA), with quilombolas, Indians and peasant farmers, is already producing a tonne of juçara pulp with the harvest begun in February and slated to end this month.

This first yield will supply the care centres of Ubatuba, according to Cristina Reis, IPEMA’s agro-forestry education coordinator. The institute also helps with juçara planting and management plans. The fruit’s pulp has four times more anthocyanine – an antioxidant pigment – than the açaí, and thus has “strong medicinal power” as well as nutritional value, she says.

In Ivaporunduva they can also harvest enough fruit to process the pulp, says Renata Barroso, who coordinates the ISA juçara project. But there is a lack of tradition to make use of the fruit, she admits.

“Before, we cut the palm hearts a half-hour from home, but today we have to walk 14 hours to reach the palm trees,” says Jorge. To not waste the trip, the palm cutters also take down young palms, extracting small hearts for which they earn much less, says the member of the Pedro Cubas quilombo.

Despite the adversities, there are still those who persist in this illegal activity. If caught, they could face jail time.

The quilombolas and other rural inhabitants of the Ribeira valley practice subsistence agriculture and need the income they get from bananas, the leading local crop, and from hand crafts and from jobs outside the community, but they also rely heavily on government assistance.

The juçara could be an additional source of income, and making use of its fruit also promotes forest conservation, says Barroso.

The fruit “feeds a great diversity of animals – mammals, rodents and mostly birds,” which makes this species “a key to the biodiversity of the Atlantic tropical forest,” according to Barroso, a forestry engineer who chose this palm as the subject of her master’s thesis.

If the juçara recuperates, its management will be very easy, so that there could be a return to sustainable extraction of the palm heart to meet the demands of the market, believes Reis.

In several locations around Brazil, including the Ribeira valley, farmers are planting “pupuña” or “chontaduro” (Bactris gasipaes) to harvest the palm hearts.

“But a heart as delicious as that of the juçara cannot be found anywhere in the world,” says Jorge, repeating a widespread opinion that conspires against the recovery of this palm species.