BRAZIL: Livelihoods Vs. Environment – Afro-Descendants Caught in the Middle

REGISTRO, Brazil, Jul 23 2008 (IPS) - "They won’t let us plant our crops," says Leonila Costa Pontes, referring to the laws that require an environmental permit for her to cultivate her small plot of land. 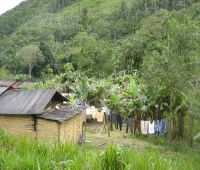 The problem lies with the traditional "slash-and-burn" technique used to prepare the land for farming in Brazil. "If we don’t burn, we can’t grow anything," Pontes complains. And by the time the environmental authorities finally grant the necessary permits, "the sowing season is already over," she adds.

Pontes, a 59-year-old mother of three, lives in Abobral, a small village on the shores of the Ribeira de Iguape River. Abobral is a "quilombo" – communities originally established by runaway African slaves before slavery was abolished in Brazil – although it is not officially recognised as such, unlike other quilombola communities in the country.

Because of the difficulties they face in raising food crops, many families in the community remain dependent on food-aid handouts from the government, Ponte laments.

Ponte voiced her protests alongside 60 other participants in the Quilombola Citizenship Seminar held recently in Registro, the largest city in the Ribeira Valley. Located between the cities of São Paulo and Curitiba in southern Brazil, this 28,506-square-kilometre mountainous river basin is like a miniature Amazon basin, and almost 80 percent of its forests are classified as protected areas.

Using the slash-and-burn technique without a previously approved management plan to prevent fires from raging out of control and wreaking damage on the surrounding areas is an environmental violation, explained Luciana Bedeschi, an attorney from the Socio-Environmental Institute (ISA), which organised the seminar.

As Bedeschi told IPS, this is just one example of the conflicts that frequently emerge between the law and quilombola traditions, and between environmental protection and the right to use the land. Both sides have legitimate rights, she stressed, which demands "balanced consideration," especially when issues like the survival and food security of traditional communities are involved.

Brazil’s quilombola communities today are made up of the descendants of the African slaves who originally founded them. Similar settlements were established throughout the Americas in regions colonised by Europeans.

The greatest threat currently faced by these communities in Brazil is related to land ownership issues.

In the Ribeira Valley, there have been at least 59 quilombola communities identified, but only 15 have been formally recognised as such, and of these, only six have been granted land ownership deeds. And even in the latter, community members are still waiting for the eviction of "third parties" – non-Afro-Brazilians who have occupied parts of quilombola territories and must now be compensated by the government before they will leave.

Edivina Braz da Silva of the Pedro Cubas de Cima community warned that a "foretold tragedy" could erupt at any time because of the growing attacks by "third parties" against quilombola children as well as the ongoing insults and threats.

For his part, Osvaldo dos Santos threatened to "set fire to an estate even if it means going to jail," in response to the agrarian authorities’ failure to remove seven illegal landholders from his quilombo, Porto Velho. "We have been too passive," he said, and as a result the landholders have remained in the community, where they "destroy the forests, cut off the water, and burn our pastures and crops," he added.

These communities are the modern-day remnants of the quilombos formed by African slaves who escaped from forced labour in gold mines from the 16th century onwards.

They are also home to descendants of Afro-Brazilians who took refuge there to escape forced recruitment during the 1865-1870 War of the Triple Alliance (which pitted Brazil, Argentina and Uruguay against Paraguay), and others who were abandoned to their fate after the abolition of slavery.

Slavery was abolished in Brazil in 1888, and 100 years later, the constitution recognised the right of quilombola descendents to "definitive ownership" of the lands they occupy.

The communities in the Ribeira Valley began to be officially recognised in 1998, marking the first step in the long administrative and judicial process to formalise land ownership, which is collective, in the name of local community associations.

Since 2006, the ISA has been assisting 14 quilombola communities in the region to promote their development and propose and monitor public policies targeted to them. These are small communities, with the largest comprising around 100 families spread out over broad areas, sometimes with a central settlement of a few dozen houses.

The first battle was to convert Jacupiranga Park, created by the government of the state of São Paulo in 1969, into a so-called "Mosaic" of different forms of environmental preservation. This move was meant to resolve the conflict between the rights of the quilombos established within the park’s borders long before it existed, and those of the park itself, a fully protected area where any form of human activity is prohibited.

For the first time ever, a quilombola community will have its own RRPN, announced Nilto Tatto, coordinator of ISA’s Ribeira Valley Programme.

Although they are recognised as prime examples of harmonious coexistence with nature, together with indigenous peoples and other traditional communities, quilombola communities feel that they are "punished" over environmental issues.

The Ribeira Valley quilombos are also affected by the Atlantic Forest Law, passed two years ago. The legislation establishes specific regulations for the most damaged ecosystem in Brazil, which has already lost 93 percent of its forest cover – although the Ribeira Valley area stands out as an exception.

José França, a member of the quilombola community of Nhunguara, said the law is "too restrictive" because it does not allow local residents to use dead wood or to build the roads that are indispensable for improving local living conditions.

Many quilombo members have been charged and sentenced under the law for such activities as hunting and cutting trees in protected areas in order to build or to clear new fields to plant crops, as part of their traditional farming practice of land use rotation.

In most cases, the courts hand down alternative sentences to fines or prison terms, such as periodic reporting to legal authorities or community service, as long as the accused "acknowledges the environmental violation."

But ISA is opposed to this solution, said Bedeschi, and would prefer for these trials "to run their course," because as far as they are concerned, there has been no crime committed in these cases.

"These people have lived here since before the creation of protected areas, and activities undertaken for survival and out of necessity are not criminal," she argued. This is "a field of law still under construction," which requires "flexibility and common sense," she added.

The Ribeira Valley faces more serious environmental threats. The preservation of 80 percent of its total forest cover contrasts sharply with the loss of "close to 60 percent" of the riparian or gallery forests that grow alongside rivers and protect them from soil erosion, sedimentation and reductions in fish stocks, commented Tatto.

Last year ISA joined with other environmental organisations, schools, traditional communities and government agencies to launch the "Eyebrows of the Ribeira" campaign, aimed at replacing 120 hectares of lost gallery forests in two years. It is a modest goal, compared with the 11,000 hectares that have been destroyed.

Another threat lies in the plans for four hydroelectric plants to be built on the Ribeira River. One of them, Tijuco Alto, is intended to supply power for an aluminium plant, and has already been authorised despite opposition from numerous sectors. Its impacts will be felt on agriculture and fishing, which provide proteins and other nutrients for much of the local population, noted Tatto.

Life in the quilombos is also changing as a result of the development of alternative economic activities promoted by ISA. These initiatives are aimed at breaking the current dependence of many quilombola dwellers on government assistance, in the form of family allowances, food aid and rural pensions.

Bananas are the main source of earned income, because they "grow anywhere, are weed-resistant, and can be sold directly to consumers or stores," aside from the fact that they do not need to be replanted annually, pointed out 62-year-old Antonio Cristino Pedroso, a father of four and a member of the quilombo community of Ivaporunduva.

Rice, on the other hand, needs to be weeded, husked, sorted and packaged, which puts farmers in the hands of middlemen "who buy at low prices," he noted. That is why rice and other crops like beans, corn, cassava, leafy vegetables and different kinds of fruit are only grown for the community’s own consumption.

But even in the case of bananas, the market today "demands high quality," on the basis of appearance more than flavour, which leads to the need for special care in their cultivation, commented Reinaldo Ribeiro, an ISA technical specialist who works directly with the quilombola communities.

In addition, the arrival of the banana plant disease known as black sigatoka in the Ribeira Valley has increased the need for agrochemicals.

But many quilombola communities have begun raising organic bananas as a way of fetching higher prices and avoiding competition with large producers, and they are now forced to take even greater precautions, such as regularly clearing the soil and spacing the banana plants to allow for greater ventilation and avoid the high temperatures in which this fungus flourishes, Ribeiro explained.

Information, training and the creation of a "label" for organic bananas are essential in order to successfully break into the market, he added.

The quilombola communities take advantage of the local tourism industry to sell their products to the visitors drawn to the area by the quilombos themselves, as well as by the numerous nearby caves. These goods include handicrafts and honey, as well as organic bananas and products made with them.