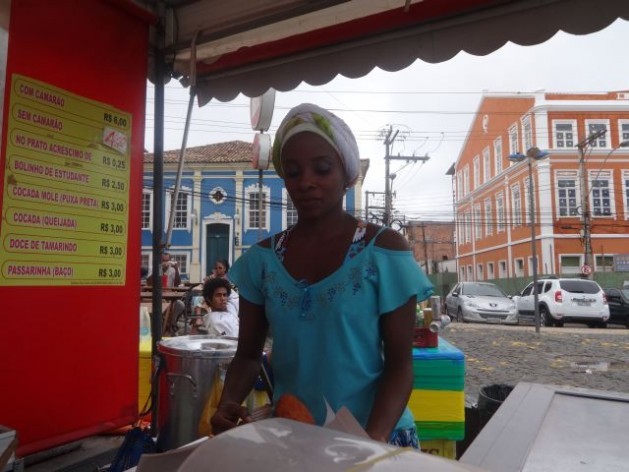 RIO DE JANEIRO, Oct 21 2013 (IPS) - Carla Vilas Boas is of mixed-race descent – African, European and indigenous – like a majority of the population of Brazil. But she spends hours straightening her hair, trying to look more like the blond, blue-eyed women she sees in the mirror of television.

The 32-year-old domestic worker acknowledges that Brazil’s popular telenovelas have started to include characters like her – people from the country’s favelas or shantytowns, who work long workdays for low wages.

But among the actors and the models shown in ads, “there are only a few darker-skinned people among all the blue-eyed blonds. And you wonder: if I buy that shampoo and go to the hairdresser, can I look like that?” she remarked to IPS.

But her hair “never looks that way,” even with the new shampoo or the visit to the hairstylist, and Vilas Boas said that makes her feel “really bad.”

More than half of the women in this country of 200 million people – where over 50 percent of the population identified themselves as black or “mulatto” in the last census – do not identify with the images they see on TV.

Experts say that because of the prejudices reflected in the choice of actors and models, advertisers potentially lose a large segment of consumers.

A survey by the Data Popular polling firm and the Patrícia Galvão Institute (IPG), a women’s rights organisation, interviewed 1,501 women and men over the age of 18 in 100 towns and cities spread across every region of the country.

In the study “Representations of women in TV advertising”, 56 percent of those surveyed said ads did not show “real” Brazilian women.

For 65 percent of the respondents, the model of beauty in TV ads has little to do with the way Brazilian women really look, and 60 percent said they think women get frustrated when they do not feel reflected on TV.

At the age of 17, Karina Lopes feels insecure as a woman. Her body has changed, but not into the shape she sees in the ads offering her clothes, make-up and low-cal yogurt.

“Even if I eat that yogurt every day, I’ll never be thin like that woman selling it,” she told IPS. “You feel bad because that image is so different from the way you look. Normal women aren’t shown on TV.”

Mara Vidal, assistant director of IPG, said “women come in all colours and shapes. We aren’t stereotypes. That’s what the public is saying – it’s not something that women’s organisations or academic studies came up with.

“It’s the public who are saying ‘we want to be better represented in society, not just by one single, universal type’,” Vidal told IPS.

She said she also suffered in the past. As a girl, she didn’t want to go to school because other kids called her “black girl with broom-bristle hair” because of her brown skin and red hair.

“I didn’t start liking my hair till I got to university, when I stopped straightening it,” she said. “My generation wasn’t as aware as people are today. The concept of someone who was ‘good-looking’ didn’t include people with our hair and colouring.”

Brazilian TV and the country’s world-famous telenovelas have gradually started to overcome prejudice and today black or brown-skinned characters are less limited to the traditional discriminatory roles of domestics, family drivers, or criminals. Some have even cast darker-skinned women as central characters.

But advertising, unless it specifically targets that segment of the population, still does not represent blacks.

“In an ad for margarine we don’t see black women or happy black families. But in the area of cosmetics we’re starting to see a change,” Vidal said.

For example, there are now lines of products specifically designed for darker-skinned women and shampoos for “curly” or “dark-coloured” hair.

But that is not happening yet “as much as we would like,” said Vidal. “Brazil, because of its tradition of excluding blacks, has not yet dared to fully show that reality.”

Renato Meirelles, director of Data Popular, said that exclusion is now hurting advertisers. According to the polling firm, women in Brazil represent 500 billion dollars a year in income and are the ones who decide on 85 percent of what families consume.

Women are not just a “niche market but the main consumer market, and advertisers don’t know how to reach out to them,” Meirelles told IPS.

The idea that “Brazilian women want to be like Europeans is old,” he said. “Now women are proud of their new identity.”

Factors that have helped boost this newfound self-esteem include laws aimed at fighting racial discrimination that have been adopted in recent years and the fact that some 30 million people have left poverty behind and have moved up into the middle class.

According to Meirelles, “the big problem of advertisers and advertising agencies is that they belong to the elite and their decisions emerge from an elite mind-set. That’s why they fail to understand that a new consumer market has emerged.

“Aspiration has given way to inspiration, where the model represents successful black women. Companies should understand this process of achievement that we have experienced,” he said.