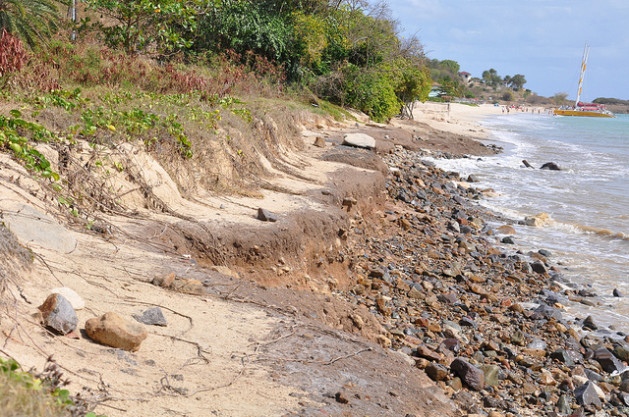 WARSAW, Nov 20 2013 (IPS) - Diann Black-Layne grew up in a single parent home with nine siblings on the tiny Caribbean island of Antigua. Still, life was easygoing and enjoyable, she recalls. For her, it was paradise.

But paradise was lost in 1979 when Hurricane David, at that time considered the strongest storm ever to hit the Caribbean, came roaring in, followed 10 years later by Hurricane Hugo.

"Hurricane Luis hit in 1995 and it sat on the island for two days and it destroyed 90 percent of the homes, and just thinking about it I get goose pimples." -- Diann Black-Layne

Since 1995, Antigua and Barbuda has withstood the fury of five more hurricanes.

“My mom, who is more than 20 years my senior, experienced only one hurricane, and I have experienced nine,” Black-Layne told IPS.

Black-Layne is now the chief environment officer and her country’s ambassador for climate change. She longs for the paradise in which she grew up, but acknowledges that the era of her childhood is likely gone forever.

“The beaches are now eroding, even beaches without any construction on them. We have salt water intrusion. It’s getting hotter and farmers are struggling more to produce so it’s very different now,” she said.

Antigua and Barbuda has a combined population of 89,000 and while most people are aware that something is happening with the climate, for the majority, the two-week United Nations Climate Change Conference at the national stadium in Poland is just another talk-shop.

“They are just trying to focus on ensuring that their homes are ready in the event of a storm and that’s all they are focusing on right now, making sure that they have enough money to pay their home insurance which can be like 10-20 percent of your monthly mortgage payments,” Black-Layne said.

“I understand what is happening and that is the reason why I leave my three kids and my husband to come here,” she added.

She is very clear about what she wants to achieve out of these negotiations, not just for Antigua and Barbuda, but for the other small developing states of the Caribbean region.

“Antigua is already paying for adaptation and it’s costing us a lot of money. We are saying that what a U.S. citizen or an EU citizen pays for adaptation, we should be on the same level. Our interest rates are much higher, two [to] three times than what an American would pay,” she said.

“We need access to capital at the same rate they get access to capital. That would ease the strain significantly and that is possible. That is what we are negotiating now under the convention. That is the key.”

Denis Antoine, Grenada’s ambassador and permanent representative to the United Nations, told IPS that the Caribbean delegation is approaching the negotiations with “a united front” and the issues for the region are capacity building, financing for development, mitigation and adaptation.

He emphasised the need for financing for climate change and for the developed countries meet their commitment to ensure that the small island developing states are afforded the opportunity to develop their economies.

“The greenhouse gas is not spilled by us. We are not the perpetrators but we are called upon to spend our own local funds so our case is that it is double jeopardy,” Antoine told IPS.

John Ashe, the president of the U.N. General Assembly and a fellow Antiguan, told the opening of the first High-level Segment of COP 19 on Tuesday that the picture was “bleak”.

“And if we use the same arguments, the same stalling tactics, that picture will only get bleaker,” he said, pleading with the parties to ensure that a deal is reached in 2015 and that it “be comprehensive and of necessity bind us all. To avoid the usual last minute dash where we leave everything to that magical twelfth hour, I urge you to begin serious considerations right here, right now in Warsaw.

“We have now entered the era of super storms, and the human tragedies and ravages such storms and typhoons bring are part of our daily vernacular,” Ashe added. “However, we in this room must never ever become inured to this.”

But mere hours after Ashe’s call, the Group of 77 developing countries and China walked out of negotiations on loss and damage at 3:55 am (Warsaw time) on Wednesday over the draft negotiating text seen as insufficient in meeting the needs of developing and vulnerable countries.

“As the Philippines continues to count the lives and livelihoods cost by Super Typhoon Haiyan, we appeal to governments across the world not only for sympathy but also for solidarity by supporting the institutional arrangement to address loss and damage,” said Aksyon Klima Philipinas national coordinator Voltaire Alferez.

Aksyon Klima, a network of more than 40 civil society organisations, also called out the developed countries, which led to the frustration in the latest talks on loss and damage.

But despite the recalcitrance of some rich nations, the Caribbean is taking the initiative in some areas. Black-Layne told IPS that Antigua and many of the other countries have been hit by storms so often that they’ve passed some of the best building codes in the region.

“That for us is a success story. Hurricane Luis, a category two storm, hit in 1995 and it sat on the island for two days and it destroyed 90 percent of the homes and just thinking about it I get goose pimples because you remember that,” she told IPS.

“The success story is that one year later we got hit by a category three storm and we had only 10 percent damage. So in one year we were able to recover, rebuild, and we built back better.”