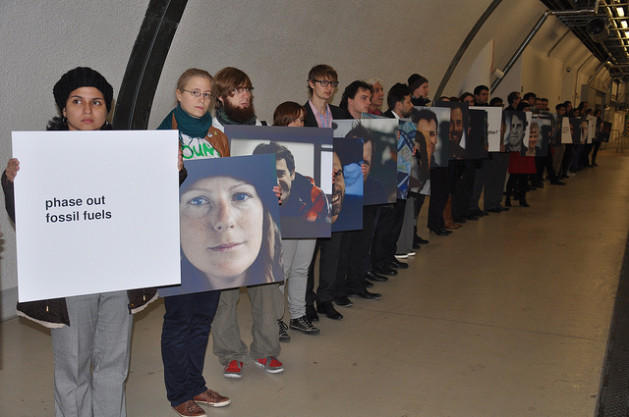 Climate defenders line the entrance to the National Stadium in Warsaw where the United Nations Climate Change Conference COP19 is being held. Credit: Desmond Brown/IPS

WARSAW, Nov 13 2013 (IPS) - For the small island developing states of the Caribbean, there is nothing more important than the United Nations Climate Change Conference taking place here at the national stadium of Poland from Nov. 11-22.

“We’re being impacted by climate change right now. We have to fight sea level rise, we are looking at increases in the frequency and severity of storm events, so it’s about survival,” Hugh Sealy, vice chair of the Clean Development Mechanism (CDM) Executive Board, told IPS.

"What we do in the next seven years will affect generations to come.” -- Hugh Sealy

“In my humble opinion, and forgive me for being melodramatic, this is the most important decade facing mankind,” said Sealy, a national of Grenada. “What we do in the next seven years will affect generations to come.”

The CDM is the largest carbon market in the world. It has so far delivered more than 315 billion dollars in assistance to developing countries. It has launched more than 7,400 projects since 2004 and has saved the developed countries about three billion dollars in cost compliance. The CDM now has a regional collaboration centre at St. George’s University in Grenada with two more centres in Lome and Kampala.

A new report released here shows that Haiti led the list of the three countries most affected by weather-related catastrophes in 2012. The others were the Philippines and Pakistan.

Germanwatch presented the ninth annual Global Climate Risk Index at the onset of the Climate Summit in Warsaw.

“The landfall of Hurricane Sandy in the U.S. dominated international news in October 2012. Yet it was Haiti – the poorest country in the Western Hemisphere – that suffered the greatest losses from the same event,” said Sönke Kreft, team leader for international climate policy at Germanwatch and co-author of the index.

In the last two decades, the 10 most affected countries have without exception been developing nations, with Honduras, Myanmar and Haiti taking the brunt during the period 1993-2012, the report noted.

The Germanwatch Climate Risk Index ranks countries according to relative and absolute number of human victims, and relative and absolute economic damage. The core data stems from the Munich Re NatCatSERVICE. The most recent available data from 2012 as well as for the 20-year-period 1993-2012 were taken into account for the preparation of this index.

“Our results are really a wake-up call to ramp up international climate policy and to better manage weather-related disasters,” said Kreft. “The year 2015 represents a major milestone, which needs to deliver a new climate agreement, and the international disaster framework is also up for renewal.”

The climate summit in Warsaw is expected to chart a road-map for an ambitious 2015 agreement. But Sealy and a very vocal Caribbean delegation at the summit are determined to leave Warsaw with some tangible benefits.

“I live in Grenada right now,” Sealy told IPS. “The cost for electricity in Grenada is 40 U.S. cents per kilowatt hour, it’s one of the highest in the world. Ten percent of our GDP is spent on importing diesel. It’s a constraint for the entire economy. We have hotels that can’t pay their electricity bills.

“If we can get something out of this conference that says that monies will pour into developing countries to help them transform their energy sectors then that’s a sustainable development benefit that will affect the entire region.”

Sealy’s role here is as the lead negotiator for work stream two for the alliance. He explained that at the 2011 climate summit in Durban, it was agreed that developing countries and developed countries have to come together to take mitigation action to reduce CO2 emissions.

“Work stream one is trying to come up with a 2015 agreement that would come into effect in 2020. Work stream two, which is what the alliance pushed for, says we cannot wait until 2020 for an agreement,” Sealy said.

“We have to take action now so we insisted that we have a work stream two and my job here is to make sure that countries move forward in the next seven years enhancing mitigation,” he explained. “So what we hope to get out of work stream two is a technical process that identifies the mitigation potential that developing countries could take and also the means of implementation – the finance, the technology transfer, the capacity building that would allow small islands to move forward.”

The Warsaw conference also negotiates how to directly address climate-related loss and damage, a topic of special interest to small island states.

On Wednesday, the World Meteorological Organisation (WMO) reported that this year is on course to be among the top 10 warmest years since modern records began in 1850.

The first nine months, January to September, tied with 2003 as the seventh warmest such period on record, with a global land and ocean surface temperature of about 0.48°C (0.86°F) above the 1961–1990 average, according to the report.

WMO’s provisional annual statement on the Status of the Global Climate 2013 provides a snapshot of regional and national temperatures. It also includes details on precipitation, floods, droughts, tropical cyclones, ice cover and sea-level.

“Temperatures so far this year are about the same as the average during 2001-2010, which was the warmest decade on record,” said WMO Secretary-General Michel Jarraud.

“All of the warmest years have been since 1998 and this year once again continues the underlying, long-term trend, the coldest years now are warmer than the hottest years before 1998,” he said.

“Atmospheric concentrations of carbon dioxide and other greenhouse gases reached new highs in 2012, and we expect them to reach unprecedented levels yet again in 2013. This means that we are committed to a warmer future,” added Jarraud.

Sealy told IPS that the key issues for the Caribbean at Warsaw include “recognising that climate change is affecting us now and we need support now to not only adapt but also to transform our economies.”

He pointed to Typhoon Haiyan that hit the Philippines with sustained winds of 300 kilometres an hour and peak winds of 380 kilometres per hour.

“How can we adapt to that type of storm in the Caribbean?  It’s totally impossible. So what the world has to do is reduce their emissions and that’s what we’re trying to do here. We are trying to bring a sense of urgency to this conference that we have to do things now, not wait until 2020,” Sealy added.