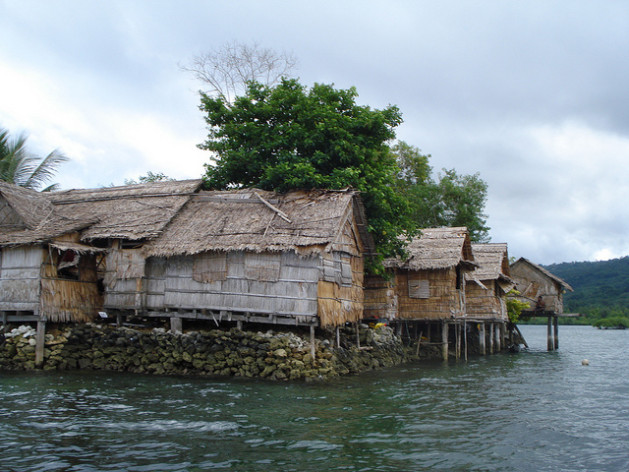 UNITED NATIONS, Nov 11 2013 (IPS) - Threatened by rising seas, some of the world’s small island developing states (SIDS) are demanding that the U.N.’s new set of Sustainable Development Goals place a high priority on the protection of oceans and marine resources.

A growing number of SIDS, including Papua New Guinea, Samoa, the Maldives, Tonga, Nauru and Kiribati, are making a strong case for a stand-alone goal for the protection of oceans in the post-2015 development agenda known as the SDGs, which is currently under discussion.

"There is absolutely no way that humanity can have a sustainable future without healthy oceans." -- Cyrie Sendashonga of IUCN

Hassan Hussain Shihab, first secretary of the Maldives diplomatic mission to the U.N., told IPS that oceans are a priority for the Indian Ocean island nation, whose 339,000 citizens are threatened by sea-level rise.

“The establishment of an SDG dedicated to oceans is critical to Maldives as the oceans are our source of life, livelihood and the identity of the people,” he said.

Covering more than 70 percent of our planet’s surface, he said, oceans play a key role in supporting life on earth.

“They regulate our climate, provide us with natural resources and are essential for international trade, recreation and cultural activities,” he said. “We therefore strongly call for the creation of a Sustainable Development Goal for oceans, which covers the coasts, the exclusive economic zones (EEZs) and the high seas.”

Mark Neo, deputy permanent representative of Singapore, told IPS oceans are also the economic lifeblood of his country, also one of the 52 designated SIDS.

“As an entrepot, we are highly dependent on maritime trade. And oceans are a precious resource and there are many users of the oceans,” he said.

“We believe that given the many demands on the oceans and its resources, the conservation and sustainable use of oceans and seas and of their resources for sustainable development is important,” he added.

Neo said the U.N. Convention on the Law of the Sea must form the legal framework of any sustainable development goal on oceans.

Addressing the General Assembly in September, King Tupou VI of Tonga told delegates, “Tonga joins SIDS in calling for the inclusion of climate change as a cross-cutting issue of SDGs.

“Oceans are a thematic priority and should also be prominently featured in the SDGs and the post-2015 agenda,” he said.

The prime minister of Antigua and Barbuda, Winston Baldwin Spencer, has called for greater international support for SIDS.

“It is a recognised fact, but it is worth repeating, that SIDS contribute the least to the causes of climate change, yet we suffer the most from its effects,” he told delegates during the U.N. General Assembly (UNGA) sessions in September.

He said small island states have expressed “our profound disappointment at the lack of tangible action.”

The current president of 193-member UNGA, Ambassador John Ashe of Antigua and Barbuda, has expressed his strong support for sustainable development.

His spokesperson Afaf Konja told IPS the UNGA president was “very keen on the issue” and is fully aware of the importance of oceans on SDGs.

She said oceans are expected to be high on the agenda of the open working group (OWG) currently negotiating SDGs and the post-2015 economic agenda.

The OWG is expected to complete its work in mid-2014 and its final report, with a new set of SDGs, will go before a meeting of world leaders in New York in September 2015.

Oceans are front and central in the quest for sustainable development and deserve their own Sustainable Development Goal, she added.

“There is absolutely no way that humanity can have a sustainable future without healthy oceans as they play a vital role in ensuring critical ecological and geological processes, and in sustaining livelihoods and human well-being in general,” Sendashonga said at a U.N. seminar last month.

Any discussions in the SDGs and the post-2015 development agenda processes have to take this into account, she said.

As the recent report of the Intergovernmental Panel on Climate Change (IPCC) clearly documents, 90 percent of the climate change energy, since 1971, has actually gone into the ocean in the form of ocean warming, and warming may have started as far back at the 1870s, Sendashonga pointed out.

“Urgent and far more ambitious actions are therefore needed to keep pace with the changes in the ocean,” she said.

A Pacific island nation with a tiny population of about 100,800, Kiribati is one of the many SIDS in danger of being wiped off the face of the earth because of rising sea levels.

“We have to be the most studied, most researched and the most media-covered nation relating to climate change,” she told delegates last week at a meeting of the U.N.’s social and economic committee.

Sea levels are rising, coastlines are being eroded, and extreme weather events were growing more common, she said, even as the United Nations was providing large-scale humanitarian assistance to thousands of victims of a typhoon that devastated parts of Philippines over the weekend.