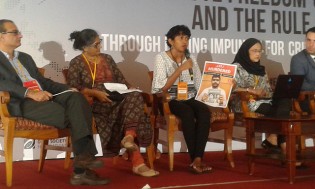 By Thalif Deen
The Maldives, one of the world’s low-lying, small island developing states (SIDS) -- threatened with extinction because of a sea-level rise-- is shoring up its coastal defences in anticipation of the impending calamity.

By Ethan Freedman
Former Maldivian President Mohamed Nasheed expressed concerns Monday about the state of democracy in his home country, noting the dividing effect of a rising tide of Islamist extremism.
ADVERTISEMENT ADVERTISEMENT