Ambassador Ahmed Sareer is Permanent Representative of Maldives to the UN and chairman of the Alliance of Small Island States (AOSIS). 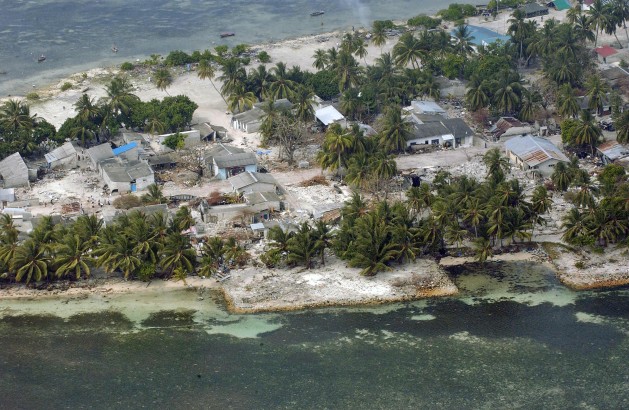 An aerial view of the Village of Kolhuvaariyaafushi, Mulaaku Atoll, the Maldives, after the Indian Ocean Tsunami. UN Photo/Evan Schneider

UNITED NATIONS, Jun 25 2016 (IPS) - Last month, over two thousand high-level participants from across the world met in Antalya, Turkey for the Midterm Review of the Istanbul Programme of Action, an action plan used to guide sustainable economic development efforts for Least Developed Countries for the 2011 to 2020 period. The main goal was to understand the lessons learnt by the world’s Least Developed Countries (LDCs) over the past five years and apply the knowledge moving forward.

For my country, the Maldives, the past five years have been a chance to experience first-hand the realities of life after graduation from LDC status. In January 2011, the Maldives was officially removed from the list of LDCs, the culmination of decades of hard work and determined efforts of developing the country. The Fourth UN Conference on LDCs, held in May 2011, was the last for the Maldives as an LDC, but last month in Antalya, we went back because we believed it was important to share the lessons we had learnt since 2011.

While our graduation was naturally a moment of pride and cause for celebration for a country only 50 years old, it was accompanied by a sense of uncertainty about the challenges we would face following the withdrawal of the protections and special preferences afforded to LDCs.

Ultimately, we were able to forge ahead in spite of these difficulties and adapted to the new realities. We ensured that our economy, driven by a world-class tourism sector, and a robust fisheries industry, would continue to be competitive and dynamic. We focused on fostering a business-friendly climate, while making prudent investments for future growth.

However, we remain conscious of the degree to which the gains we have made are vulnerable to exogenous shocks. On 20 December 2004, the United Nations General Assembly (UNGA) decided to graduate the Maldives effective 1 January 2008. But just four days before the UNGA decision, a catastrophic tsunami swept across the Indian Ocean, claiming the lives of over 275,000 people in fourteen countries.

The 2004 tsunami was especially devastating in the Maldives. With the highest point in our country being just 2.5 metres high, virtually all of it was, for a few harrowing minutes, underwater.

Several islands were rendered uninhabitable; nearly one in ten people were left homeless.

Farms were destroyed, the fresh water lens corrupted, with large-scale loss to infrastructure. The economic cost of the destruction was equivalent to close to 70 percent of GDP, a blow from which it took us over a decade to recover.

The Maldives is not alone in facing such vulnerabilities. For many countries, particularly Small Island Developing States (SIDS) such as our own, an end to LDC status does not necessarily herald the disappearance of structural barriers to growth—such as limited access to markets, geographical isolation, environmental pressures, or difficulty achieving economies of scale.

By 1997, the Maldives had already exceeded two of the three thresholds that determine LDC status—GNI per capita, and the Human Capital Index, measured in terms of undernourishment, child mortality rates, secondary school enrolment rates, and adult literacy.

But we did not exceed the threshold for the third criterion, the Economic Vulnerability Index (EVI), which measures the structural vulnerability of countries to exogenous economic and environmental shocks – we did not meet this threshold to date. It is not necessary to meet all three thresholds to in order to graduate—meaning we were considered ready for graduation.

As the tragedy of 2004 taught us, persistent vulnerabilities have the potential to undermine, if not reverse, gains made towards development. Despite meeting the formal requirements, we were not yet ready. The lessons of our own experiences have meant that the Maldives has been consistent in calling for a smoother and more holistic approach to the graduation process.

Firstly, the criteria for graduation must account for the structural vulnerabilities of developing countries. The fact that economic vulnerability can be disregarded in determining whether a country is ready to graduate from LDC status represents a critical oversight.

Second, the Economic Vulnerability Index itself must also be redesigned to better account for vulnerability. At present, the index fails to account for key considerations such as geographic and environmental vulnerability, import dependency, and demographic pressures.

With greater attention being paid to the effects of climate change on developing countries, most notably in the Sustainable Development Goals (SDGs), evaluating vulnerabilities more comprehensively is a task that has acquired even greater importance.

Lastly, the extension of support and assistance to countries must be determined on the basis of their individual capabilities and challenges, rather than their mere place on a list. We would be remiss to overlook the role that development assistance, including that provided by the UN, has played in helping the Maldives progress—as it has for many others—particularly in regards to our work in disaster preparedness and climate change mitigation.

The withdrawal of such assistance—including preferential trade access and concessionary financing—following our graduation from the ranks of the LDCs has meant increased fiscal challenges. This disregards the unique challenges faced by countries like the Maldives due to their specific structural constraints—constraints ignored under the present graduation regime.

While efforts have been made to smooth the graduation process for LDCs—in 2004, and most recently in 2012—the process remains deeply flawed and in need of comprehensive reform. To this end, the Maldives has called for the World Trade Organization (WTO) to extend the application of TRIPS (trade-related aspects of intellectual property rights) for all LDCs, in addition to the exploration of a “small and vulnerable economy” category at the United Nations, which would recognize the particular needs of such countries.

Similarly, we must move towards devising measures of development that do more than just record national income, and instead provide a more meaningful assessment of national capability and capacity, for which GDP can often be a poor proxy.

No country wishes to be called “least developed”, much less remain in that classification indefinitely, but the factors driving underdevelopment must be meaningfully dealt with if we wish to attain genuinely sustainable development. It is for this reason that we believe that the desire by countries to eradicate poverty and achieve economic development must be met with commitment on part of the United Nations and other organizations to chart a realistic and holistic path towards that end.