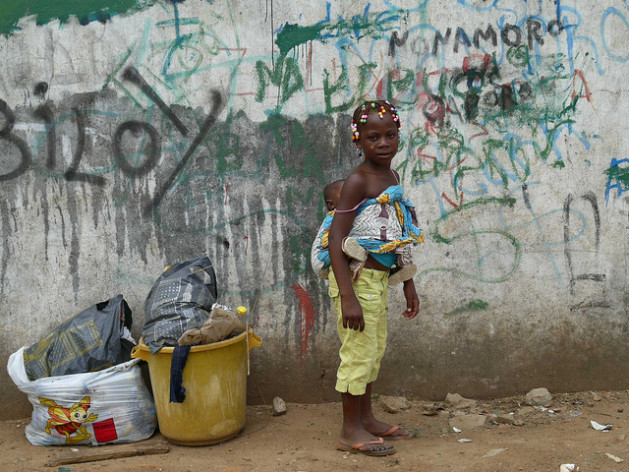 Children in Luanda. Angola is expected to graduate from the ranks of the LDCs by 2015. Credit: Louise Redvers/IPS

So far, three countries – Botswana, Cape Verde and the Maldives – have “graduated” from LDCs to the status of developing countries.

"The key issue of a widening inequality gap and redistribution of resources remains a development challenge." -- Dr. Arjun Karki of LDC Watch

And as economies improve, at least six more countries – Tuvalu, Vanuatu, Kiribati, Angola, Samoa and Equatorial Guinea – are on the verge of leaving the ranks of LDCs by 2015.

But some of them have been reluctant to graduate – and sought postponements – since LDC status provides several benefits, including preferential tariffs on exports and increased development aid.

Still, the growing list of potential “graduates” comes in the midst of a new U.N. report that says inflows of foreign direct investment (FDI) to LDCs grew by 20 percent last year, registering a record 26 billion dollars.

The strong gains were led by Cambodia, as well as five African countries: the Democratic Republic of Congo (DRC), Liberia, Mauritania, Mozambique and Uganda, all of them LDCs.

Still, 20 LDCs reported declines in FDI, and the trend was particularly pronounced in Angola, Burundi, Mali and the Solomon Islands.

Described as the poorest of the world’s poor, LDCs are mostly characterised by extreme poverty and economic structural weaknesses.

According to the United Nations, these have been often compounded by geophysical handicaps, limited capacity for growth and development and vulnerability to external shocks.

The most recent addition to the list of 49 LDCs is the new nation state of South Sudan, which joined the United Nations as its 193rd member in July 2011.

Asked if the FDI increase in LDCs is the beginning of a new trend or just a flash in the pan, Dr. Arjun Karki, international coordinator for LDC Watch, a global civil society alliance solely focused on developmental issues and concerns of the LDCs, told IPS, “The scenario is not crystal clear.”

Given the fall in FDI inflows to developed countries, the LDCs are now on the FDI radar, he added.

“If you observe the trend, it’s the resource-rich LDCs, such as the DRC, Liberia, Mauritania, Mozambique, and Uganda, that are receiving FDI inflows,” he pointed out.

But investments are reported to be highest in the extractive sector, he noted.

“From the development perspective, this trend is not very encouraging as this reinforces the commodity-led growth in LDCs which is not sustainable,” Dr Karki said.

The U.N. Committee for Development Policy (CDP) usually determines “eligibility” for LDC status – based on several factors, including population, national income and other economic indicators – but the ultimate decision rests with the countries themselves.
Zimbabwe, for example, has refused to join the LDC group despite being judged eligible by CDP.

Secretary-General Ban Ki-moon says the increase in FDI comes at “an important moment” when the international community is making a final push to achieve the Millennium Development Goals (MDGs) by the target date of 2015.

One of the primary objectives of MDGs is to reduce and eliminate extreme poverty and hunger, two of the major problems facing most LDCs.

At the same time, he said, the United Nations is working to forge a vision for the post-2015 development agenda.

Credible and objective information on FDI can contribute to success in these twin endeavours, Ban added.

Dr. Karki told IPS the new Istanbul Programme of Action for LDCs for the Decade 2011-2020 is a slight shift from the commodity-oriented growth towards building productive capacity of LDCs in order to achieve structural economic transformation of LDCs.

Therefore, FDI inflows to LDCs would be welcome if they are targeted at the manufacturing sector, infrastructure and basic services sector such as health, water and sanitation, electricity and communications.

The key problem with FDI inflows targeting the extractive sector is that the benefits fail to trickle down, with only the multinational and transnational corporations and the recipient country’s elites minting money at the expense of the poor, marginalised and vulnerable communities, he pointed out.

“The key issue of widening inequality gap and redistribution of resources remains a development challenge,” he said. “This fact was blatant during my recent visit to Liberia and Sierra Leone – two extremely resource-rich LDCs but unfortunately, with the poorest populations.

“Given such a sad irony, our civil society partners were of the opinion that all the riches should remain in the soil/ground as they fail to ensure the right to sustainable development of the peoples anyway.”

The negative growth – particularly in Angola, Burundi and Mali – could be attributed to the political instability in these LDCs, which is not a good breeding ground for FDI.

“Having said this, it is also interesting to note that FDI inflows are high in both authoritarian regimes as well as in vulnerable governments as is the case in Africa and Asia,” Dr. Karki noted.

He said the other reason for FDI decline could be the evolving role of development-oriented governments in LDCs that are attempting to safeguard national interests and rights of peoples over profit and plunder.

“If this is truly the case, then LDC governments are in the right direction towards genuinely uplifting their populations out of the structural causes of poverty, deprivation and injustices,” he said.

The issue of sovereignty is critical in terms of respecting and complying with country systems. Otherwise, it has been proven that FDI is more of a bane than a boon for sustainable development, Dr Karki concluded.