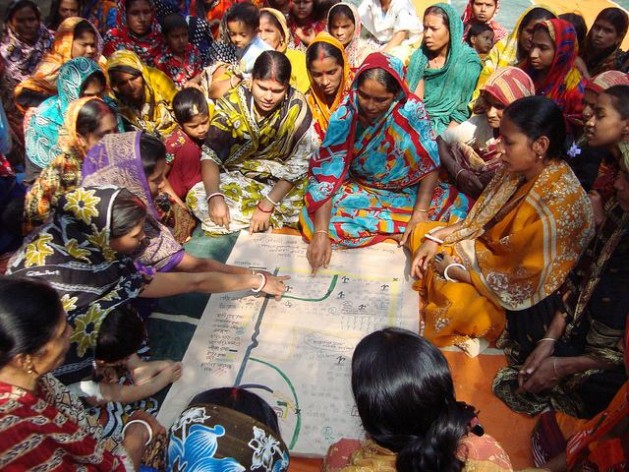 BANGKOK, Jun 26 2014 (IPS) - The Bangkok Declaration on Disaster Risk Reduction in Asia and the Pacific adopted at the close of the 6th Asian Ministerial Conference On Disaster Risk Reduction (AMCDRR) here today emphasised community-based solutions, and reflects a growing global desire to focus more on grassroots actions in the face of catastrophic climate change.

Organised annually in collaboration with the United Nations Office for Disaster Risk Reduction (UNISDR), this year’s conference – hosted by the Thai government – marks the last time stakeholders from the region will meet before a global summit in Japan next year brings governments together to draft post-2015 plans.

Margareta Wahlstrom, special representative of the U.N. secretary general for disaster risk reduction, said in her opening remarks to the conference that an inclusive and participatory model is needed, which allows grassroots communities and local government authorities to work together as central players in disaster risk reduction (DRR) efforts.

“We should not be developing solutions in boardrooms and conferences like this,” he told IPS. “We should rather work with communities, that know much better how they are effected. Most of the time they have solutions that work best for them.”

Speaking at a media conference later, Wahlstrom pointed out that East Asia serves as a model for the rest of the world, as its DRR policies over the last 20 years have led to significant reductions in fatalities as a result of natural hazards.

She said the conference is addressing the fundamental question of how to bring grassroots communities, who are already doing the hard work of mitigation and adaptation, into conversation with national policy makers in order to influence the development agenda.

In preparation for the 3rd U.N. World Conference on Disaster Risk Reduction (WCDRR) in Japan in March 2015, the Bangkok Declaration calls upon governments and stakeholders to enhance resilience at local levels by institutionalising integrated community approaches into local development.

In addition, it recommended the inclusion of volunteer and community-based networks and strengthening the role of women as a force in local level resilience building.

The document also stressed the need for strong accountability measures in partnerships between the community and local governments.

Thailand also managed to incorporate King Bhumibol Adulyadej’s philosophy of Sufficiency Economics into the document, highlighting the importance of a people-centered development model that could “reduce the impact of uncertainties and increase the self-immunity of local communities.”

Sufficiency economics, based on the Buddhist principles of moderation, self-sufficiency and sustainability, promotes a grassroots-oriented economic model that rejects greed, overexploitation and waste.

In the Hyogo Framework for Action (HFA2) adopted here as the blueprint for the region’s input to the Japan conference next year, building community resilience to disaster risk management was given top priority.

In the consultation process for HFA2 from March 2012 to May 2013 the emphasis has shifted from reducing vulnerabilities to building resilience. This would involve devolution of authority from a central to a local government level and the use of multi-stakeholder platforms.

This is particularly relevant in the Asia-Pacific region, where – according to a background paper produced for the Bangkok meeting by UNISDR – the number of people exposed to annual flooding has increased from 29.5 to 63.8 million in the past four years, while the number of people living in cyclone-prone areas has grown from 71.8 to 120.7 million.

Invariably, poor people and low-income communities who live in areas most vulnerable to climate change – informal housing settlements and coastal areas, for instance – have been disproportionately impacted.

“We need to be innovative and think out of the box to reform governance [at the] community level,” Bangladeshi Parliamentarian Saber Chowdhrey said at the conference.

He argued that 2015 is poised to be a watershed year with three major international conferences addressing the post-2015 development agenda.

“The more growth we have, the more problems we create,” he noted. “As Asia grows we need policy coherence, accountability and transparency.”

Stefan Kohler, with the sustainable infrastructure group of the United Nations Office for Project Services (UNOPS) told IPS a key component to the whole process is community consultation.

“They are the ones who will be involved in using the (DRR) infrastructure created for them and [we] need to understand their requirements, so that [we] can feed it to the design process.”

Nepal, for instance, has been ranked by the U.N. Development Programme as the fourth most vulnerable nation to the impacts of climatic change.

While the country has been developing national action plans on disaster management since 1996, it is only recently that the government enhanced the role of local-level participation.

Addressing a workshop here, Gopi Khanal, Nepal’s joint-secretary of the ministry of federal affairs and local development, explained that the government has shifted responsibility for DRR management to the community level.

Through Ward Citizens Forums and 3,625 Village Development Councils operating under local government structures, the national government has created an information sharing system from national through district to village levels.

“Mainstreaming of risk management requires coordination between various levels of governance, and the sharing of financial resources,” he explained.

Becky-Jay Harrington of the International Federation of the Red Cross and Red Crescent Societies (IFRC), who is based in Nepal, told IPS that this pilot scheme – currently implemented in seven of the country’s 75 districts – has channeled a considerable amount of state financial resources to community-based action on disaster risk management.

Another example can be seen in the Maldives, a country seriously threatened by rising sea levels as a result of global warming.

Mohamed Zuhair, the country’s national disaster management minister, told the meeting that the central government has given a lot of freedom to communities from far-flung atolls and islands to steer DRR activities, which in turn has influenced national policy.

He also believes that high-risk communities like his need to be innovative if they wish to survive.

“We have a private-public collaboration with the tourist industry to introduce green energy and collaborate in risk management,” he pointed out, adding, “While the Maldives has taken the initiative, bigger countries with more funds need to take responsibility and contribute to these initiatives.

Experts say the shift towards civil society must be encouraged and built upon, as the world prepares for a decade of disasters.