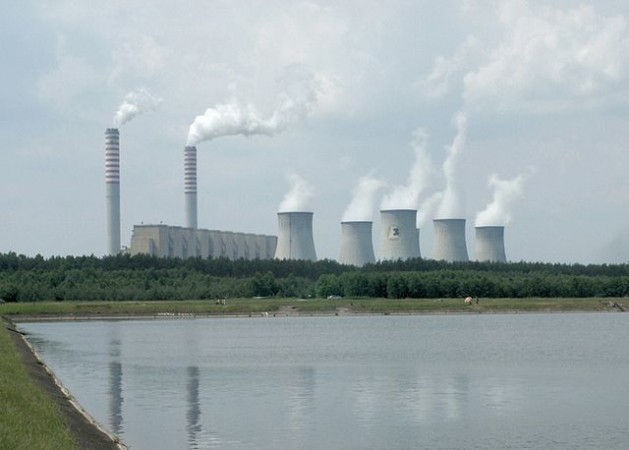 The coal-fired thermoelectric plant in Belchatow, Poland, the largest of its kind in Europe. Credit: Pibwl de Pl:Wikipedia CC BY-SA 3.0

WARSAW, Nov 12 2013 (IPS) - These are busy days in the Polish capital Warsaw, even if it doesn’t show. The United Nations Climate Change Conference COP 19 has opened at the National Stadium, while on the other side of the river Wisla the Polish far right gathered for their annual march on Independence Day on Monday.

But bar a large banner on the National Palace of Science and Culture in the centre of the city, one of the venues for the COP, hardly any signs inform local residents that an important meeting about the fate of the planet is taking place these days in their city.

Poland is organising this year’s COP because it is the only country in Central and Eastern Europe interested in the job when the region’s turn came to host the U.N. conference. Yet many question Poland’s ability to play a constructive role in the negotiations given the country’s recent history of blocking EU progress on climate targets.

Poland is this year hosting COP because it is the only country in Central and Eastern Europe interested in the job when the region’s turn came to host the UN conference.

This fall, Poland announced its intentions to also prevent Europe from setting 2030 climate goals. A bigger emissions cut commitment from the EU could play a positive role in the advancement of climate negotiations.

The reason for Poland’s stance is coal. Almost 90 percent of the electricity used in Poland comes from coal, the dirtiest fossil fuel, and the country’s energy strategy does not envisage a significant shift away from this source of energy.

Speaking in September at a mining fair in the southern city of Katowice, Prime Minister Donald Tusk famously said, “The future of Polish energy is in brown and black coal, as well as shale gas. Some wanted coal to be dispensed with, but energy independence requires not only the diversification of energy resources, but also the maximum use of one’s own resources.”

Controversially, the Polish Economy Ministry is organising Nov. 18-19, in parallel to the COP and together with the World Coal Association, an International Coal & Climate Summit. The Warsaw Communique, a document co-authored by the coal lobby group and the Polish ministry, will be delivered to U.N. representatives during the event; it contains a call to invest public resources in ’clean coal’ technologies in order to maintain high coal use around the globe.

Despite sticking strongly to its pro-coal agenda, the Polish government insists it is not opposed to the progress of climate talks. “I am not sceptical about climate change, I am sceptical about some European ways to address it,” twitted Polish Environment Minister Marcin Korolec in the run-up to the COP.

The Polish government’s current attempts to prevent the EU from heightening its own climate ambitions is much to the liking of the Polish and European far right, it was revealed Nov. 10 during an ’anti-climate summit’ organised in Warsaw by the Polish far-right party Ruch Narodowy (Polish National Movement), the Solidarity trade union and the U.S. climate-denialist think tank Committee for a Constructive Tomorrow (CFACT).

According to Greenpeace research, CFACT has been receiving almost half of its funding over the past years from the Donors Trust, a secretive funding vehicle which between 2002 and 2011 has channelled 146 million dollar to climate denialist groups.

While many of the figures financially propping up the Donors Trust are unknown, Greenpeace has been able to establish that two foundations linked to Charles Koch, the oil and chemical industry baron infamous for bankrolling climate sceptic voices, have been putting money into the Trust.

During the Warsaw conference, CFACT representatives Craig Rucker and David Rothbard made presentations arguing that climate change is not caused by human activity and claiming that climate policies would mean further impoverishment of the poor around the world.

Against this background, the Polish far right represented by Ruch Narodowy outlined their vision of Poland’s climate and energy policy, having at its core a concept of sovereignty understood as rejection of EU and U.N. policies and a reliance on domestic coal.

“We are against de-carbonisation because the Polish economy is a carbon-based economy and we are against climate regulations in the EU,” Michal Putkiewicz, an energy expert at Ruch Narodowy, told IPS. “The Polish government first signed the EU climate and energy package and now they want to prevent the EU from making it more ambitious. The policy of the Polish government now is correct, but we think it should go further and get rid of any EU regulations on emission reductions.”

The EU’s climate and energy package stipulates that by 2020 the block must reduce emissions by 20 percent compared to 1990 levels, give renewables a 20 percent share in the energy sector and improve energy efficiency by 20 percent. Poland’s two biggest political parties, the governing Civil Platform and conservative Peace and Justice party, have been recently engaged in a public game of throwing responsibility on to one another for committing to the package.

On Nov. 11, far-right groups attending the anti-climate conference joined the Independence March organised by two of the most important far-right organisations in Poland, the All-Polish Youth (Młodzież Wszechpolską) and the National-Radical Camp (Obóz Narodowo-Radykalny), which in 2011 joined to form Ruch Narodowy. Over 10,000 people joined Monday’s march. The demonstration has become a yearly show of strength by the Polish far right.

Some of the participants got involved in scuffles with one another and the police; a squat in the centre of Warsaw was attacked by participants; and a rainbow flag symbolising diversity was burnt.

“Climate change denialism is becoming a new part of the identity and narrative of right-wing extremists in Poland,” Polish climate activist Michalina Golinczak told IPS. “So the Polish climate movement should start to collaborate not only with trade unions but also with other progressive social movements, anti-fascist, anti-war, LGBT, feminists etc., to push back the alarming rise of right-wing extremists.”