SURGIDERO DE BATABANO, Cuba, Jan 30 2012 (IPS) - No one who lives in this fishing village on the south coast, 70 km from the Cuban capital, can forget the devastation wrought by hurricanes in 2008. 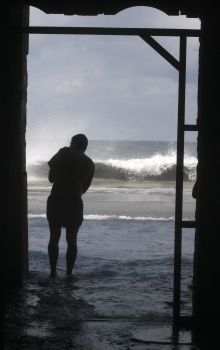 If any reminders are needed, the destroyed houses, the erosion and a beach that no longer appeals are right there in plain sight.

“The sea flooded all this area. It also piled up mountains of sand, so much so that they had to take it away in trucks. They say that the cyclone of 1944 was similar, and that people died in it. This last time no one was killed, because they evacuated the entire population, as usual,” said Mario, a voluble bartender in the small tourist complex, completely empty during this winter season.

The emergency plans put in place ahead of the hurricane season, lasting from June to November each year, prevent loss of human life or reduce it to a minimum. However, they are not so effective against economic damage.

Hurricanes Gustav, Ike and Paloma which lashed this Caribbean island within a three-month period in 2008, caused damages officially estimated at 10 billion dollars.

So there is no doubt that, while prevention is a good thing, so is adaptation to the consequences of climate change, of which the rise in sea level is among the most fearsome. Yet it is a risk that families living on the coastline do not always appreciate.

“Yes, yes, we know that we are close to the ocean, but the water has not risen much here. Besides, we’re building our new house on higher ground,” said a woman relying on her own resources to put up her new home. “My son receives cash remittances from his father, and he helps me with the building work which we are doing a little at a time, as we are able,” she said.

Studies by Cuban scientists on the vulnerability of coastal ecosystems in the Caribbean region warn that the sea level will rise by 27 to 85 centimetres between 2050 and 2100, a prospect with major geographical, demographic and economic implications for island states.

Official estimates indicate that 2.32 percent of Cuban territory may be permanently under water by 2050. If the necessary adaptation measures are not taken, as many as 79 coastal settlements will be affected and 15 will completely disappear.

Coastal ecosystems occupy five percent of the total area of the island, which has 588 km of beaches. An estimated 250 km of coastline are urbanised, and 1.4 million people live in 244 settlements, 63 of them urban and 181 rural.

“Above all, people need to know why and what adaptation is necessary,” Gisela Alonso, head of the government’s Environment Agency, told IPS. “We are undertaking climate studies in Cuba, and we have our own evaluations and our own models to predict the impact levels we have to face.”

She said financial resources, knowledge, technology and a national infrastructure of both material and human resources are needed in order to combat problems that are not primarily of developing nations’ making. “How can they take climate adaptation on board, when they lack education, health and nutritional security?” she asked.

A study carried out in eight Caribbean island nations, published in 2010 by the Caribbean Catastrophe Risk Insurance Facility (CCRIF), said these countries could lose up to nine percent of annual GDP due to storms and floods, believed to result from climate change.

Cuba is facing “above all, increased frequency and intensity of extreme weather events, particularly related to water circulation in the atmosphere, on land and underground, including not only tropical hurricanes but also drought, serious floods, higher temperatures and – for us as an archipelago, one of the greatest dangers – rising sea level,” Alonso said.

However, the expert said Cuba has “a certain advantage” because it has developed its scientific potential, with the result that for many years now it has been able to evaluate and offer alternatives for social measures “within which health issues are essential”, and for economic and environmental problems.

According to Alonso, the island nation has a programme on climate change that covers previous studies on hazards, vulnerability and risks, including possible impacts from rising sea levels, as well as action that should be taken by each sector.

The plans, as yet unpublished, include land use measures that establish how far from the coast tourism investments and new urban zones should be located; and the replanting and recovery of mangrove forests, which together with coral reefs are important natural barriers protecting the coastline. On the agricultural front there will be close monitoring of water used for irrigation.

From the educational and social point of view, Alonso said, the community ought to know what it is up against, because climate change added to soil degradation, water pollution, shortage of water for human consumption and other environmental problems are creating a complex global scenario.