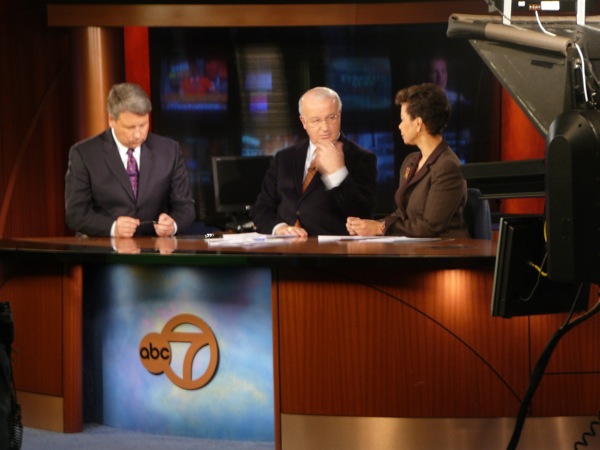 WASHINGTON, Jan 17 2013 (IPS) - The presidential election topped news coverage in 2012 from the three major U.S. television networks, closely followed by violence in the United States and Middle East, and extreme weather events in the United States, according to the latest annual review by the authoritative Tyndall Report.

Britain also received a significant amount of airtime on the three most-watched evening news programmes, with the London Olympics and British royal family garnering more attention than any other foreign country or news story except Syria’s civil war, according to the Report.

Syria, the top foreign news story of the year, claimed 461 minutes of network evening news time, or roughly three percent of the total amount of “news” presented by the networks’ weekday evening news programmes, which for most of the public are the most important source of news information.

The Olympics and the British royals together received almost as much attention as Syria – a total of 377 minutes, which was more than the two next biggest foreign stories combined: the December killing in Benghazi of the U.S. ambassador to Libya and three of his staff (163 minutes); and the fighting in Afghanistan (158 minutes).

Apart from those stories, the outside world received minimal or no attention, according to the Report, which for over 20 years has tallied the number of minutes that each weekday evening network news programme allocates to news events.

Despite the controversy surrounding immigration and drug-related issues, Mexico received a total of only 44 minutes of coverage by all three network news programmes in 2012, according to Tyndall’s tally. But that was far more than the rest of Latin America.

“Haiti, [Venezuelan President Hugo] Chavez’s illness and election hardly got anything. Nothing on Colombia, except the Secret Service prostitution scandal there,” noted Andrew Tyndall, the Report’s founder and publisher.

The scandal, in which a team of U.S. Secret Service officers was discovered cavorting with prostitutes, claimed 54 minutes of the networks’ time, or ten minutes more than all Mexico-related coverage.

Similarly, sub-Saharan Africa, led by stories about newly independent South Sudan and the “Kony 2012” viral video against the Lord’s Resistance Army (LRA), received less than 30 minutes’ coverage during 2012, he said.

The vaunted U.S. “pivot” to Asia and rising tensions in the region also received minimal attention.

The Eurozone crisis, which has had a serious impact on and poses still greater risks to the U.S. economy, received a total of 87 minutes of coverage – or about 40 percent less than the British royals.

“Here we are in this globalising economy and culture,” noted Robert Entman, a communications and international affairs professor at George Washington University. “This shows how the ability of Americans to understand this global interdependence is really hindered by the superficial and glancing coverage to what’s going on in the world.”

While Fox News, CNN and MSNBC are widely recognised as important sources of news, the evening news programmes of ABC, NBC, and CBS enjoy roughly seven times the viewership of the cable channels. Together, they have an average nightly news audience of more than 20 million people.

The Report reviews the three evening news programmes, which present an average of about 22 minutes of news each and together nearly 15,000 minutes throughout the year.

As in previous election years, the 2012 presidential race led 2012 coverage with 2,016 minutes – or about 15 percent of total news coverage. The increase in domestic political news during election years has normally come at the expense of international or foreign policy news, and 2012 was no exception, according to Tyndall.

At 461 minutes, the violence in Syria ranked second as a discrete news story, followed by Hurricane Sandy (352 mins); the Summer Olympics (246 mins), and partisan wrangling over the federal deficit (206 mins). The Libya crisis ranked eighth; Afghanistan, tenth; and the British Royals, sixteenth out of the top 20 stories, both foreign and domestic.

In addition to Hurricane Sandy, the top 20 included four other major weather stories: the slew of tornados that hit various parts of the country; the summer’s western wildfires; extreme winter weather early in the year; and Hurricane Isaac, which caused severe damage in the Caribbean and the U.S. Gulf Coast last August.

These five weather events claimed nearly 1,000 minutes of coverage on the three networks, or about seven percent of the year’s total. Yet until Sandy none of the programmes explored the question of their possible relationship to climate change.

“Only one story in the first week of Sandy addressed rising sea levels being possibly related to global warming,” Tyndall told IPS. “That was an angle of the weather stories that was woefully undercovered.”

Extreme weather events in other parts of the world, such as Europe’s harshly cold winter, major flooding in Australia, Brazil, China and the Philippines, and drought in the Sahel, received at most only peripheral coverage on the three networks.

News of ice melting more quickly than anticipated in the Arctic Ocean and Greenland received a total of nine minutes on the three programmes, according to Tyndall.

“It’s been the same for many years now,” said Dan Hallin, a communications professor at the University of California at San Diego about the lack of coverage of climate change. “Sandy produced the beginnings of some discussion of that, but in general, the issue has been glaringly absent.”

On stories with a purely international focus – that is, those that did not include an explicit U.S. foreign-policy angle – Syria ranked at the top, followed by the two British stories, and the political upheaval in Egypt (93 min), which in 2011 received over five times as much coverage.

“Outside our borders, it looks either like the froth of the Olympic Games and the royals or violence,” noted Entman. “I think it’s legitimate to take note of both, but there are a lot more important substantive things.”

“The world that is presented on U.S. newscasts is an extraordinarily narrow one,” noted Peter Hart, an analyst at Fairness in Accuracy and Reporting (FAIR), a progressive press watchdog group. “The substantial attention given the British royal family last year is a pretty clear demonstration of what U.S. corporate media think of as important news from abroad.”