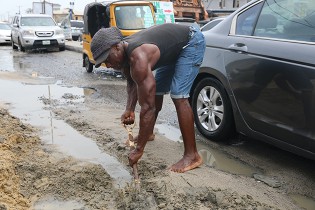 By Johanna Treblin
The Olympic Games are widely viewed as a chance for countries to showcase their fastest, strongest, most skilled and disciplined athletes, a time when political, economic and cultural differences are set aside and individuals are judged on personal merit alone.

By IPS Correspondents
The 2010 Winter Olympics opened with the largest protest convergence in the history of the Games.

By IPS Correspondents
Getting around isn’t easy for Jose Noronha. With minimal use of his legs, he has opted for a red wheelchair-bicycle hybrid that he pedals with his hands, a common sight in Dili, East Timor’s capital.

By IPS Correspondents
At first it was nothing out of the ordinary. A book intriguingly titled ‘China Is Not Happy’ was expected to generate a buzz because it claimed to detail the world’s most populous nation and aspiring superpower’s resentment of foreign abuses.

By IPS Correspondents
A coalition of indigenous elders, social justice activists and community organisers is voicing opposition to the upcoming Winter Olympics, promising to continue their protests up to and throughout the 2010 games.

CUBA: The End of the Long Olympics Reverie

By Patricia Grogg
Cuba has had a rude awakening from a three-decade dream as undisputed Olympic games leader in Latin America and the Caribbean, turning in the worst performance since Mexico City in 1968.

CHINA: The Air Hasn’t Quite Cleared

By IPS Correspondents
While China's dramatic last-minute measures to cut pollution during the Beijing Olympics grabbed headlines, a little publicised Norwegian project in Guizhou province shows just how difficult it will be to make lasting changes.

By IPS Correspondents
As the curtain falls on the Beijing Olympics, the race is on to define the legacy of one of the most controversial games in history. For the host country, these are the "millennium games", which herald the dawn of the ‘Asian century’ where China reigns supreme.

By IPS Correspondents
The 29th summer Olympics cast renewed light on China's treatment of ethnic minorities in Tibet, and as the games wind down, a similar, if less pronounced set of controversies will follow the torch to Canada when Vancouver hosts the 2010 winter games.

By IPS Correspondents
As China piles up gold medals, even the host nation has been watching in bewilderment. Despite popular expectations that China’s athletes would shine on home turf, the medal bonanza has surprised usually skeptical Chinese people.

By IPS Correspondents
Is the Peking duck winning the contest? The jury is out on which Chinese specialty is going to be crowned as the Beijing Olympics’ most favorite local product.
Next Page »
ADVERTISEMENT ADVERTISEMENT