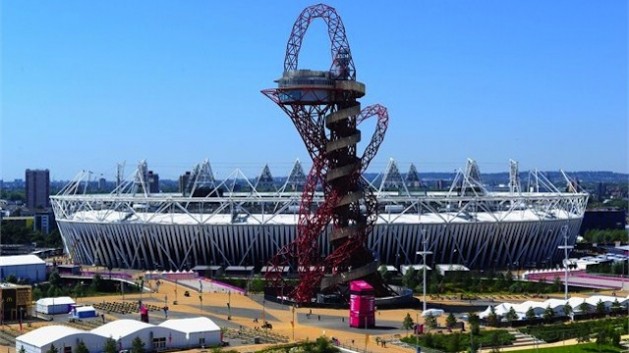 The Olympics stadium in London.

HANOI, Vietnam, Jul 27 2012 (IPS) - Agent Orange (AO), often called the ‘last legacy’ of the United States war in Vietnam (1955-1975), has popped up again thanks to its manufacturer Dow Chemical’s controversial sponsorship of the Olympic Games.

Vietnam is not boycotting the games but has made an official protest to the International Olympic Committee (IOC), with sports minister Hoang Anh Tuan conveying “profound concern” over Dow’s multi-million dollar sponsorship. Agent Orange is the code name for herbicides and defoliants used by the U.S. military as part of its herbicidal warfare programme in Vietnam.

After relations between the U.S. and Vietnam were normalised in 1995, the former earmarked funds for cleanup operations, but these were largely confined to ‘hotspots’ such as former airbases where AO was stored rather than human populations that suffered the drops over a 12-year period.

Growing cooperation between the former enemies can be seen in the three visits by U.S. secretary of state Hillary Clinton over the last two years. Defence secretary Leon Panetta also visited Vietnam in June.

But, the growing ties have not changed significantly the U.S. attitude in the matter of compensation for human damage caused by AO.

Nguyen Van Rinh, a retired general and head of the Vietnam Association of Victims of Agent Orange, told IPS in an interview:  “Yes, I believe that many Vietnamese are angry with the decision of the Olympics 2012 organisers. And this is completely justified.”

AO contains dioxin, one of the most toxic substances known, and scientists estimate that as little as a few parts per billion can be damaging.

Estimates of people affected by AO range from 2.1 million to over four million, and the Vietnamese government blames it for cancers and birth defects in some 500,000 second and third generation children.

The Vietnam Red Cross has reported that as many as three million Vietnamese have been affected by AO, including at least 150,000 children born with birth defects.

U.S. scientists have however been sceptical of Vietnamese studies and estimates of human damage caused by AO, citing poor scientific research and little peer reviewing of research work.

On the other hand, compensation for suspected AO damage is paid to female U.S. war veterans, and support given to their children. Those born with spina bifida or birth defects from unknown causes, to parents who served in areas where AO was sprayed or stored, are also given support.

The Institute of Medicine of the National Academy of Sciences concluded in its report, ‘Veterans and Agent Orange: Update 1996 Summary and Research Highlights,’ that “there is limited or suggestive evidence of an association between exposure to herbicides used in Vietnam and spina bifida in children of Vietnam veterans.”

For some time now, environmentalists have also been concerned that Monsanto, which supplies much of the world’s seeds, has been quietly making inroads into Vietnam. They fear a second “haunting legacy” of damage from a conglomerate that was involved in the manufacture of AO.

According to available studies the AO campaign destroyed 10 million hectares of agricultural land and some 20,000 sq km of upland and mangrove forests.

Rinh told local media later that his questions were only vaguely answered by the minister, and that neither the questions nor the answers were recorded in the minutes of the interaction with the minister.

Chuck Searcy, a veteran of the war who returned to Vietnam over a decade ago to work with unexploded ordnance and mine removal projects, says that “it was the U.S. that started talking about lawsuits and legal issues” over AO.

That the U.S. government would agree – albeit after agitation – that herbicides had caused significant damage to its own service personnel and pay out compensation to them has long angered many in Vietnam.

Says Searcy: “It (GM crops) has started to raise serious suspicions on the part of many Vietnamese because AO was produced by the same companies that claimed that the herbicide was safe.”

A group of over 100 Vietnamese plaintiffs had taken their case to the U.S. Supreme Court, suing both Dow and Monsanto for AO damage. The case, which began in 2004, was thrown out in early March 2009 with the court ruling that there was no established link between dioxin use and birth defects in Vietnam.

Also, under U.S. law, Dow and Monsanto cannot be held responsible since they were acting under government orders.

Reacting to Vietnam’s letter of protest to the IOC, Dow told VietWeek (a weekly English language news magazine published by Thanh Nien News) that the War Production Act absolves the company given that it was compelled by the U.S. government to produce the defoliant.

“I think cooperation between the U.S. and Vietnam in finding and implementing solutions to the AO issue seems to be a little better now,” Rinh told IPS. However, he said, it was still “mostly words” and that “these behaviours constitute only a small effort and are very far from what they should be doing.”