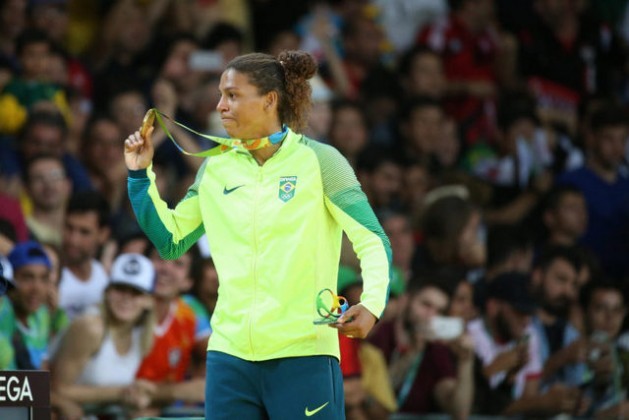 Judoka Rafaela Silva, who won Brazil’s first medal – gold - on Aug. 8, had received racial slurs like “monkey that should be in a cage” when she was disqualified from the London 2012 Games; now she is fa heroine. Credit: Roberto Castro/Brasil2016

RIO DE JANEIRO, Aug 18 2016 (IPS) - Brazil’s first gold medal of the Rio de Janeiro Olympics gave it a new multipurpose heroine, Rafaela Silva, whose defeat of the favourites in judo has made her a strong voice against racism and homophobia. Not only is she black and poor, but she just came out as gay.

In her first remarks as an Olympic champion, on Aug. 8, she referred to the harsh criticism she received after being disqualified in the second round of the London Olympics in 2012, when people lashed out against her in the social media, with one saying she was a “monkey who should be in a cage.” Her medal is her vengeance against racism.

It is also an example of a triumph over the poverty and crime that drags down so many young people in the Cidade de Deus, the Rio de Janeiro “favela” or shantytown where she grew up, which was made famous by the film City of God.

Sheer overkill also plays a key role in the media spectacle. In the Aug. 5-21 Rio Games, 11,552 athletes – eight percent more than in London 2012 – are participating in 306 medal events in 42 disciplines.

But the number of journalists grew even more, by about 20 percent. More than 25,000 accredited reporters are covering Rio 2016, which translates into 2.2 press, TV, radio and internet journalists for each athlete during the 19-day Games.

The Rio Games – the first held in South America – are the most connected Olympics in history, with data traffic and internet activity four times greater than in London.

And while six million tickets were sold for the stadiums, according to the organisers, billions in profits have been made from the spectators watching the Games on TV or over the internet worldwide.

The opening ceremony alone was watched by an estimated three billion people around the globe. The colourful ceremony and its special effects, directed by prize-winning filmmakers, cleared up the doubts about the success of the Games, due to threats like construction delays, the Zika virus epidemic and Brazil’s political and economic crisis.

The filtered view provided by dozens of TV cameras is no substitute for the actual atmosphere of the stadiums, but it makes it possible to see up-close details from different angles, including up above, which is impossible for spectators in the stadiums. And the technological advances constantly improve the experience of watching the Games from far away points on the globe.

Aesthetics is another dimension that colors the competition. It played a role in the inauguration of the Games and its strong presence in some disciplines, like the various gymnastics or diving events, helped minimise the military origins of many Olympic sports, like wrestling or shooting. 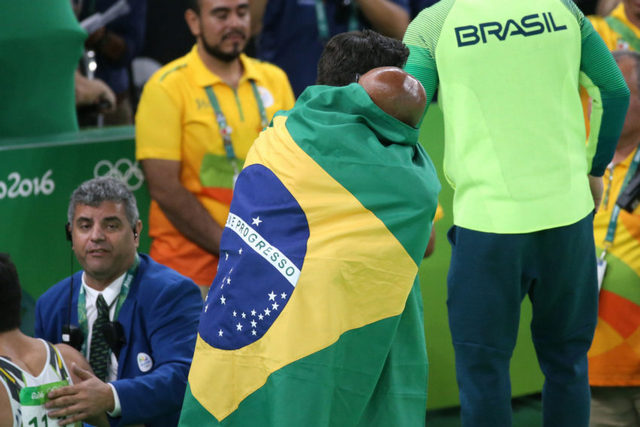 Judoka Rafaela Silva, who won Brazil’s first medal – gold – on Aug. 8, had received racial slurs like “monkey that should be in a cage” when she was disqualified from the London 2012 Games; now she is fa heroine. Credit: Roberto Castro/Brasil2016

But the drama seen in many of the contests is perhaps the central element of the Olympic media spectacle.

More people remember Swiss long-distance runner Gabriela Andersen’s struggle to finish the 1984 Olympic marathon in 37th place, staggering with heat exhaustion in the final 200 metres, than the actual winner of the marathon in Los Angeles that year.

For the honour of lighting the Olympic cauldron at the inauguration of the Rio 2016 Games, the athlete chosen was Brazilian runner Vanderlei de Lima, who became famous in Athens in 2004 when an Irish priest shoved him to the side of the road when he was in the lead in the marathon.

A Greek spectator helped free Lima from the grasp of the priest – who was later defrocked – and he continued the race. But he lost time and his rhythm was broken, and he ended in third place. For exemplifying the spirit of sportsmanship he showed by settling for the bronze, the International Olympic Committee awarded him the Pierre de Coubertin medal, a special decoration that carries the name of the founder of the IOC.

The footage of the incident, broadcast over and over around the world, made Lima an Olympics symbol.

The show needs heroes. National ones abound; sometimes winning a medal is all it takes. So far in Rio 2016, there are many examples.

Judoka Majlinda Kelmendi will surely provide a major boost to the eight-year-old Kosovo’s consolidation as an independent nation now that she has won the country’s first medal – gold. In 2012 she competed under the Albanian flag.

Fiji as well won its first medal – also gold – in Rugby Sevens, which debuted in these Games as an Olympic sport. (Rugby union was played at the Olympics from 1900 to 1924.)

Puerto Rico, an associated free state of the United States, with its own delegation in the Olympics, also took its first gold medal in Rio, won by Monica Puig in tennis.

The IOC recognizes 208 national committees, surpassing the 193 members of the United Nations. Some participants in the Olympics are not independent states, as in the case of Puerto Rico, Hong Kong, the Virgin Islands or American Samoa.

Dramatic incidents like the one involving Vanderlei de Lima also give rise to Olympic heroes, who add to the show.

Etenesh Diro of Ethiopia was cheered when she completed the 3,000-metre steeplechase, even though she finished seventh. She had pulled off her shoe when it was torn in a tangle with other competitors and continued on, barefoot.

But although she didn’t qualify for the final, the authorities rewarded spots in the race to her and two others who fell.

Heroes are generally individuals. Maybe that’s why football didn’t overshadow the Games – a worry that was apparently behind some restrictions set on participating in the sport, which is wildly popular in Brazil, such as a 23-year age limit, with three exceptions.

At any rate, the Olympic audience is guaranteed thanks to the diversity of sports, cultures and dramatic personal or national situations.

The excess of raw material for journalists and for the television and online show and the out of proportion size will make it difficult for another country of the developing South to host the Games in the near future.

Besides aspects linked to the needs and pressures of what is, more than anything, a huge global spectacle, the decision will also be influenced by the problems that cropped up in Rio, like construction delays, urban crime, water pollution, half-empty stadiums, and unsportsmanlike loud booing of some foreign athletes and teams.