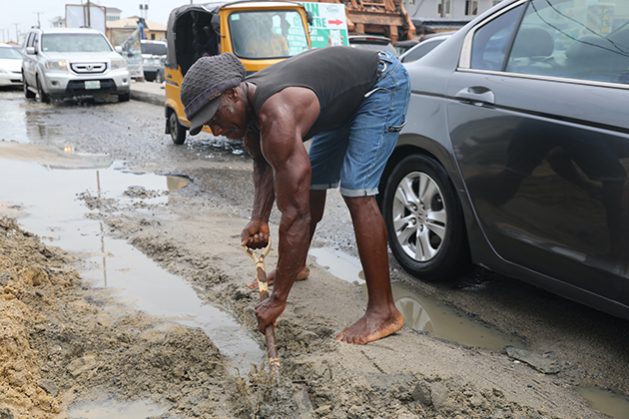 LAGOS, NIGERIA , Aug 5 2021 (IPS) - Bassey Etim Ironbar is a rare example of an Olympian that transformed from an athlete to a volunteer who does menial jobs like sweeping the streets and clearing debris from open sewers.

Ironbar, a Nigerian weightlifter, was competing in the men’s Super Heavyweight event at the 1984 Summer Olympics in Los Angeles when a leg injury ended his career.

“It happened suddenly when I was doing the clean and jerk,” he told IPS. Ironbar, whose family name coincidentally sounds like a weightlifter’s nickname, was a bronze medalist at the 1982 Commonwealth Games in Brisbane, Australia.

He was at the peak of his career when he competed at the Olympics. In the Ajah-Badore suburbs of Lagos, Nigeria’s commercial capital, Ironbar is living a life different from the one he lived as a top athlete. After spending the bulk of his income to treat his injury, Ironbar has retired to a life of doing voluntary menial jobs on Lagos roads.

The muscular former weightlifter is a regular sight with a shovel and other working tools in hand filling potholes. Potholes are quite common in Lagos, and they get bigger with time as authorities delay fixing them. Potholes are partially responsible for the chaotic traffic in Lagos, a city where tailbacks could sometimes stretch for about 10 Kilometres. Ironbar fills the potholes in the Ajah-Badore area to ease traffic congestion in the area.

“When the road is bad, if there are potholes, I will fill them,” he said. There are, of course, lots of potholes to fill, and he often set up early for the job.

“Those leaving home around 5.30 a.m., or 6.00 a.m. will be late for work, that is why if there is a pothole, I have to quickly go there and make sure that there is a free flow of traffic so people can pass on time and get to their work early,” he said.

With very few public waste bins, Lagos streets are often littered with trash that ends up in roadside open sewers and blocking them. Water from the blocked sewers, especially during the rainy season, often spill onto the roads, causing traffic congestion.

Ironbar is always there to clear debris from the blocked sewers so water can flow freely. He also sweeps the streets regularly to prevent thrash from ending up in the open sewers. A man of many voluntary jobs, Ironbar also controls the traffic when the roads are congested.

Many people found it strange when he first appeared on the streets doing menial jobs like clearing the open sewers.

“They were saying he is a mad man, but soon they realized that I am okay when they wake up in the mornings and find that I have fixed the potholes overnight,” he said.

He started gaining recognition as potholes were disappearing overnight.

“When people wake up in the morning, they will say, but there was a big pothole here yesterday, and they will be wondering what happened to it,” he said, adding that “people will be looking for the pothole and soon they started knowing who was filling the potholes.”

Ironman said he is passionate about ensuring the smooth traffic flow in Lagos because road users waste too much time in bad traffic. At the same time, commuters must pay higher transport fares as commercial bus drivers, and commercial motorcyclists often increase their charges when there is gridlock.

He says by easing traffic flow, he is preventing wrong-way-driving, especially by commercial bus drivers and commercial motorcyclists who often leave their congested lanes to drive against the direction of traffic if the opposite lane is relatively freer. This sometimes leads to a serious accident.

“On many occasions, pedestrians sustain serious injuries or are even killed while crossing the road without knowing that a vehicle or motorcycle is approaching on top speed from the wrong direction.”

Those who appreciate Ironbar’s services sometimes reward him with money. His voluntary work has earned him the nickname Number one.

“They call me number one because they rate me the number one voluntary worker. They are happy about the way I control traffic, the way I fix the potholes and the fact that I clear the gutters and even clean the streets.”

“He is making a lot of difference here, helping to keep the roads less congested,” said Kola Adeola, a taxi driver.

But Ironman has been attacked many times by people who want to force him off the roads.

“They came for me, they beat me up, I was in pains, they want me to leave the road,” he said, adding that he is not surprised about the attacks because some people benefit from the bad traffic he is working to ease.

“When there is bad traffic, people like bus drivers and street hawkers make a lot of money,” he said, adding that there are also criminals who rob motorists caught up in bad traffic, especially at night. “Some people want me off the road because it is like I am stepping on their toes.”

Ironbar says there is nothing extraordinary about his transformation from an Olympian to a community volunteer.

“As a volunteer, I am exhibiting patriotism just as I did as an Olympian when I represented my country,” he said as he looked back with nostalgia to his days as a top athlete who competed at the Olympics.

“Being an Olympian is privileged because the Olympics is the highest in the sporting calendar, and you are competing against the best of the best in the world.”

He believes sportsmen and women should give something back to their communities as he is doing to make an impact.