BUENOS AIRES, Jan 12 2013 (IPS) - Sustained by editors and readers convinced that another kind of communication is possible, independent magazines are growing and strengthening in Argentina, offering a view different from the mainstream media coverage of political, cultural and advocacy issues. 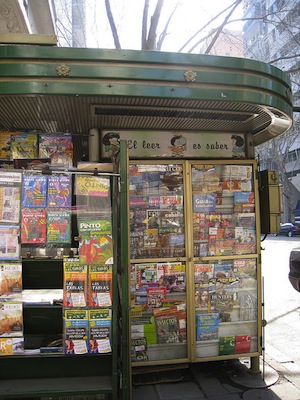 The sign above the magazine rack reads: “To read is to know”. Credit: Dvortygirl/CC-BY-SA-2.0

These are not endeavours taken up by editors in their free time, but a thriving industry with an estimated 1.4 million readers monthly, providing employment to small printers across the country.

These publications do not receive subsidies either from the government or businesses, and have little advertising.

They live practically by the sale of each copy, something forgotten by commercial magazines, which have practically become advertising catalogues, satisfied with only being displayed or circulated among the public.

Since 2011, the large majority of these alternative media have been united in the Association of Independent Cultural Magazines of Argentina (Arecia), demanding a bill that would help to strengthen a non-profit but sustainable sector.

“The purpose of the association is to show that we are an economically active sector, providing decent employment conditions, living off sales and paying cash,” journalist Claudia Acuña, president of Arecia, told IPS.

Acuña is editor of the independent magazine Mu, which was born in the heat of the economic and social crisis of late 2001 as part of La Vaca (The Cow), a cooperative that now drives other alternative communication projects.

The cooperative also provides training in self-management projects, a service journalism courses fail to provide and represents a gap in the curriculum, according to Acuña.

A survey conducted by Arecia in October indicated that 241 independent cultural magazines exist in Argentina, 95 percent of them published on paper and the rest only on the Internet.

The phenomenon is not limited to Buenos Aires – in fact, 48 percent of the publications come from the country’s interior, as a response to local concerns.

Editors united in Arecia managed to sign distribution agreements with the postal service and resisted multiple attempts by the commercial magazines to remove them from distribution and sales channels.

Big business groups like Clarín and La Nación (The Nation), for instance, collectively control 60 percent of the graphics market and own distribution networks and retail outlets.

“There is a lot of concentration and commercial magazines no longer sell hard copies. They live on private and public advertising. They are almost advertising catalogues,” said Acuña.

“The sector was losing credibility with its readers. They themselves admit to it.  By contrast, we are a market sustained by readers, a dispersed market of many titles. We are something different and we’re growing,” she said.

In the framework of this debate, the president of Arecia believes that a law can help strengthen and raise new projects. “We do not want privileges,” she said, but “equal treatment without discrimination.”

The initiative, which will begin to be debated in March, claims tax benefits, better access to financing, interest rate subsidies and state quotas for purchases that circulate among more than 3,000 public libraries in the country.

Fundamentally, the project maintains that a new rule would serve to settle the debt owed to independent magazines by the 2008 Audiovisual Services Act, whose application the Clarín group has resisted through several ploys before the judiciary.

The proposed rule democratises television and radio spaces, “but has omitted the graphics and Internet publications, as well as the independent and self-governed (media), without which the law could not have counted on the channels of discussion and dissemination,” independent media practitioners claim.

The text of the proposed law argues that strengthening these magazines is a way to “battle monopolisation, not just of products but of content”, and that it is also a way to “enshrine socially the idea that other types of communication are possible”.

It adds that these alternative publications “do not encourage competition, but the coexistence of different ways of perceiving and expressing life.”