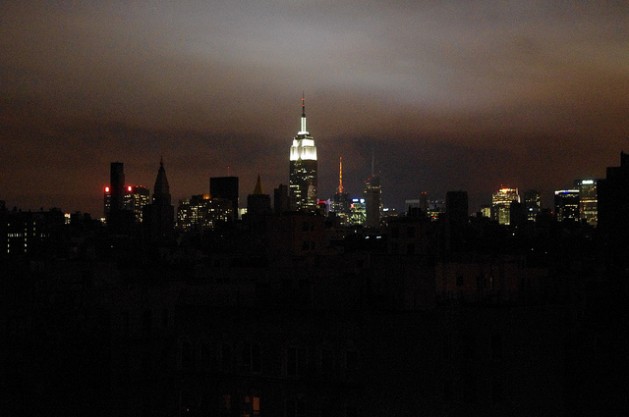 Midtown New York skyline with the Empire State Building in the background (with electricity), in the foreground is Alphabet City and the East Village without power, Tuesday night, Oct. 30, 2012, after Hurricane Sandy. Credit: David Shankbone/cc y 2.0

NEW YORK, Feb 18 2013 (IPS) - The “Spirit of America” is one of 10 ferries that carry passengers from Manhattan to Staten Island. Its keel – which lies on the bottom of the boat and carves through the waters of New York Harbour– was built with steel from the collapsed Twin Towers.

While embarking, one can take in a panoramic view of some of New York’s diverse waterfronts: from the shores of Battery Park – the front lawn of Lower Manhattan’s skyscrapers – to the iconic Liberty and Ellis Islands, and to the industrial piers of Red Hook.

Communities with lots of political power and influence are going to get resources...The question is, are we insuring that our most vulnerable communities are getting the same type of support, so they can recover from major storms like Sandy?

But atop the “Spirit of America”, a glance from one waterfront to the next presents a clear disparity in landscape and lifestyle.

According to a September 2012 New York Times article, the poorest one-fifth of New York City residents made 8,844 dollars in the previous year, while the richest one-fifth made 223,285 dollars. These figures rival income inequalities in the global south.

On Sep. 17, 2011, those who were critical of the economic system that gave way to such disparities touched off the Occupy Wall Street movement in Zucotti Park, in the Wall Street financial district in Lower Manhattan.

And when Hurricane Sandy swept through the waterfront on Oct. 29, 2012, its destruction was disproportionate as well.

A storm doesn’t discriminate, but people do

“A storm doesn’t discriminate where it hits based on race or class,” said Albert Huang, senior attorney in the Natural Resources Defence Council’s (NRDC) urban programme.

Even Wall Street was without power after Hurricane Sandy struck. Stores and restaurants were closed for days, traffic lights hung uselessly from their poles and subway entrances leading underground were as dark as caverns; similar plights were seen across New York’s five boroughs.

“Where we see the disparity, usually, is in the response to a disaster,” Huang told IPS.

According to Huang, neighbourhoods that suffered most during the aftermath of Sandy were low-income neighbourhoods, people of colour and elderly populations – many of whom live in public housing developments in places like Red Hook, the Far Rockaways and Coney Island.

“Communities with lots of political power and influence are going to get resources. They’re going to get all these different kinds of amenities,” explained Huang, who coordinates the NRDC’s work on environmental justice.

“The question is, are we insuring that our most vulnerable communities are getting the same type of support, so they can recover from major storms like Sandy?”

U.S. history books marked 2012 as the country's warmest year ever. Devastating weather events, ranging from severe droughts in the Midwest to storm surges in the east, battered the country. U.S. citizens gathered on Feb. 17 in Washington for what is known as the largest climate rally in history to force the government’s hand in addressing climate change.

At the heart of the protest is the potential construction of the Keystone XL Pipeline, which would transport crude oil from the tar sands’ oil deposit in Alberta, Canada across the United States to its southern coasts in the Gulf of Mexico. According to NASA climate scientist James Hansen, this pipeline would contribute dangerously to climate change, and it would mean “game over for the planet”.

Climate change and storm surges also exacerbate pre-existing mold and moisture problems in public housing, said Huang. According to a June 2011 report by the National Academy of Sciences, the build-up of mold and moisture in indoor environments contributes to health-related issues.

Mold and moisture is especially worrying in areas with already poor air quality, such as in East Harlem and the South Bronx, said Huang. Those neighbourhoods are surrounded by three highways and contain heavy air pollution. Their residents suffer from the highest levels of asthma in the country.

In NYCHA buildings, mold and moisture are worsened by broken pipes and leaking roofs. In January 2013, Bloomberg and NYCHA Chairman John Rhea announced a plan to address all 420,000 backlogged open repair work orders by the end of 2013.

But Huang worries that even if NYCHA does address all 420,000 work orders, it would not be enough.

“They show up with bleach and sponges and they wash off all the mold (from) the walls, (but) until you eliminate the moisture problems inside the walls, you’ll continue to have mold problems,” he explained.

“You can’t just do the cosmetic stuff,” he added.

Significant Maritime and Industrial Areas (SMIAs) are characterised by New York City as places along the waterfront that contain dense clusters of industrial firms and water-dependent businesses; they were also designated in 1992 as areas to be protected and encouraged for continued use in this fashion.

“What we immediately realised was that every single one of these SMIAs were in storm surge zones”, said Eddie Bautista, executive director of NYC-EJA.

On top of that, NYC-EJA layered maps from all the public environmental databases they had access to – ranging from New York State superfund sites to the U.S. Environmental Protection Agency’s toxic waste inventories – and they discovered troubling overlaps.

“There are only six of these SMIA communities in the city,” Bautista told IPS, listing them as the South Bronx, Sunset Park, Red Hook, Newton Creek, the Brooklyn Navy Yard and the North Shore of Staten island.

“They are classic environmental justice communities,” he added.

Bautista cited a number of chemicals present in these areas, chemicals that the community would be exposed to during storm surges. They include trichloroethylene, which is a carcinogen; Naphthalene, which causes liver and kidney damage and harms eyesight; and N-hexane, which affects the brain.

“Half the businesses that were impacted by Sandy were industrial businesses,” he said. “For our communities, this presents a clear and pertinent danger.”

“We know that these (storms) are going to become more frequent and more intense,” he said. “If you know there are communities who, based on their profile, are vulnerable… to do nothing, to not act is an abdication of basic government responsibility.”

A few months ago, NYC-EJA proposed a series of recommendations to the city in order to make sure SMIA residents were aware that they lived in storm surge areas.

But something else happened that day.

“Ironies abound, they had to cancel the hearing (for) the city’s coastal zone management plan because of a severe weather event and storm surges,” said Bautista.  “You can’t make this stuff up.”