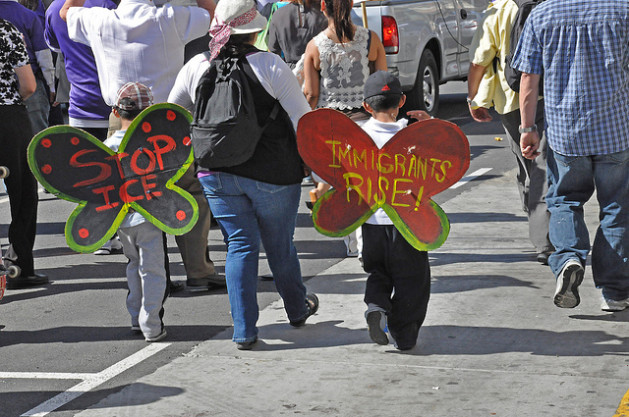 Many in the crowd of San Francisco May Day marchers wore butterfly wings; the Monarch butterfly migrates to Mexico and then back to the U.S. every year. Credit: Judith Scherr/IPS

SAN FRANCISCO, California, May 2 2013 (IPS) - More than 1,000 people marched under the brilliant San Francisco sun on May Day. Their signs, such as “Work in America/Live in America/Dream in America. Immigration reform now,” their songs, chants and speeches wove together the twin themes of the day: worker justice and immigrant justice.

“People are getting separated from their families every day. We want a stop to that immediately." -- Kitzia Esteva of Causa Justa

In all, there were some 85 marches calling for worker and immigrant rights around the U.S., including a march of 700 in Oakland, California, 2,000 in Los Angeles and several thousand in New York.

Seattle-based journalist Mark Taylor Canfield told IPS that unions brought large numbers of people out to a peaceful march of several thousand in Seattle. A break-off group broke windows and damaged property. Police reacted with “large amounts of pepper spray and flash-bang grenades,” he said. There were 13 arrests.

In San Francisco, Tessa Levine was getting ready to march with Mujeres Unidas. Like many in the crowd, she wore butterfly wings. The Monarch butterfly flies to Mexico then back to the U.S. every year, she said, explaining, “It’s really a symbol that migration is beautiful, that migration is natural.”

Still, migration is regulated by law. And at this point, no one knows exactly what the new immigration law will look like – or if one will actually make it through both houses of Congress and on to the president’s desk.

A number of demonstrators told IPS they had serious questions about the bill known as the Bipartisan Framework for Comprehensive Immigration Reform scheduled for consideration by the Senate Judiciary Committee on May 9.

A Narrow Definition of "Family"

The LGBT community also has concerns with family. The proposed law leaves gays and lesbians where they are now – unable to sponsor their partners for immigration, said Renata Moreira, policy and communications director for Our Family Coalition.

“Right now, the current exclusion is devastating for over 40,000 families who are raising children in this country and are unable to sponsor their loved ones as our heterosexual counterparts can do,” she said.

Moreira is hopeful, however, that the Uniting American Families Act, introduced in both the House and Senate in February, will be adopted and give binational same-sex couples the same immigration rights as heterosexual couples.

A primary concern with the bill is the 13 years it would take most immigrants in the U.S. without documents to become citizens. The positive aspect is that, during the waiting period, they would be able to work legally. However, during that time, they would be excluded from social services, including the right to purchase health insurance under the Affordable Care Act.

“We want a fast and just path to citizenship,” said Kitzia Esteva, of the advocacy organisation Causa Justa.Just Cause, noting that immigrants’ taxes pay for these services.

Emily Lee, with the Chinese Progressive Association, expressed similar concerns. Noting that one million out of the 11 million undocumented persons living in the U.S. are Asian-Pacific Islanders, she asked, “What does that mean when you’re paying back taxes, and you’re expected to contribute to the society, but you’re not receiving the benefits?”

But even getting onto the path for citizenship under the Senate bill under discussion could be impossible for people who have worked informally as day labourers or domestic workers, since the applicant is expected to show proof of having worked in the U.S.

“These are men who are working every day,” said Emiliano Bourgois-Chacon, with the San Francisco Day Labor Program and Women’s Collective. But because they are undocumented, they don’t have paperwork to prove they have been working, Bourgois-Chacon said.

Keeping the family together was another concern of May Day demonstrators.

The bill in the Senate would make it more difficult for families to sponsor siblings. “Family reunification has been a cornerstone of immigration in the U.S.,” Lee, of the Chinese Progressive Association, said. “And to start chipping away at that…is very problematic.”

Many people in the Chinese community wouldn’t otherwise have been able to come to the U.S., she added.

Deportations that rip families apart are of great concern to a number of demonstrators IPS interviewed. There have been some 800 deportations from San Francisco since 2009, with the introduction of Secure Communities or “S-Comm”, the programme where local police share arrest information with U.S. Immigration and Customs Enforcement, according to Estava of Causa Justa.

Across the Bay in Alameda County, the Oakland-Berkeley area, there have been 2,000 deportations since 2009.

“People are getting separated from their families every day,” Estava said. “We want a stop to that immediately. We are fighting to get local police to stop the collaboration between police and ICE, and we have that same demand on the national level with immigration reform.”

Deportation has also heavily impacted the Arab immigrant community, said Lara Kiswani of the Arab Resource and Organizing Center. “There’s obviously racial discrimination and systemic criminalisation of Arabs and Muslims here in the United States, which leads oftentimes to deportation,” she said.

Like Estava, Kiswani said the high number of deportations comes from collaboration between local and federal law enforcement. “There should be an end to S-Comm so that there’s more accountability to local law enforcement and so that people aren’t unjustly targeted and deported for various misdemeanors,” she said.

Another problem with the current and proposed law is the E-verify programme through which an employer can verify a person’s social security number. ICE can request an employer perform an E-verify audit.

Olga Miranda, president of Service Employees International Union Local 87, said a few years ago several hundred of her union janitors were targeted by an E-verify audit, fired, and “lost everything overnight”.

Esteva pointed to another problem with the proposed law: putting resources into enhanced law enforcement on the border.

ICE and the border patrol have the most law enforcement money in the country, Esteva said. “Instead of putting that money into border enforcement, we could see a lot more social services and resources for the community. We think that money would not be well invested in protecting the border.”

Nancy Mackowsky marched the two-mile route holding an American Federation of Teachers banner. She teaches English as a second language at San Francisco City College and said some of her students work from 6 a.m. to 6 p.m., then come to her class in the evening four days a week.

“They have goals, they have dreams and they deserve to be able to fulfill them,” she said.