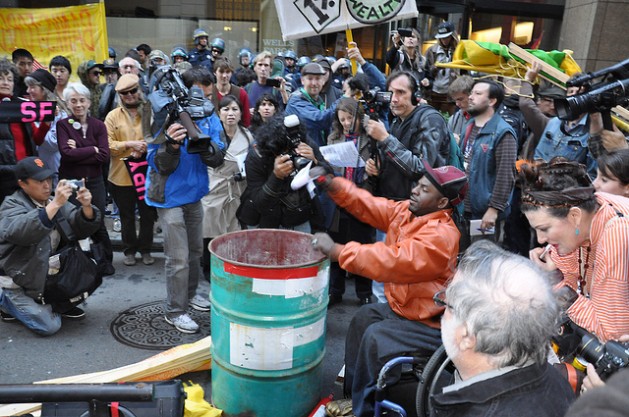 The anniversary was also celebrated in New York City and some 30 other cities around the world.

“Debt buys us all,” said Amy Oh of Occupy San Francisco, addressing the crowd before the march. “We’ve got housing debt… student debt; healthcare debt; credit card debt…. Your city, your county, your state are also in debt … to the bankers.”

Cities cut social services and the state cuts transportation subsidies to pay the debt, she said. “(Debt) is affecting all of us.”

At the War Memorial, they held a press conference with seniors facing foreclosure. Robert Moses is a disabled 92-year-old African American World War II veteran. “I was paying my notes – I had no problem paying my notes – but they doubled the payments on my mortgage,” he said. Moses had paid off the original loan, but refinanced to make repairs.

“They begin to tell you stories about…how they can create an inheritance for your children,” he said. “Then you find out that these banksters are just like Satan and they make promises that they have no intention of keeping.”

The day was joyful, with occupiers taking over streets without police intervention. The media turned out in force. Occupiers reminded the nation that they haven’t gone away.

In reality, however, the hard work goes on when the party’s over and TV crews leave. IPS talked to several activists about their day-to-day work and Occupy’s influence on it.

There were Occupy anniversary celebrations across the globe, including in some 30 U.S. cities.

In New York City, 100 people were arrested when they tried to form a human chain around the stock exchange; arrests included one legal observer, according to Alternet.

The day before, two code pink activists were arrested outside the Bank of America chanting “Bust Up Bank of America” and holding bras to symbolise the “bust up” big banks message, according to a Code Pink bulletin.

Some 100 demonstrators protested near the Monsanto plant in Davis, California, to protest genetically modified organisms – similar demonstrations were in other cities around the world.

Occupy Toronto and other Occupiers have been walking across Canada since May to converge on Parliament and demand “real democracy,” according to an Occupy Toronto press release.

Refusing to be a statistic

On Dec. 6, 2011, Gayla Newsome and her daughters walked back into the West Oakland townhouse from which they’d been evicted five months before. Occupy Oakland joined forces with the Alliance of Californians for Community Empowerment (ACCE) to support the family and keep vigil at the house until they were sure the sheriff wasn’t coming back.

Today, Newsome and her children are still in their home. One of two home loans has been forgiven; the second loan is being modified.

The housing defence movement was born long before Occupy. Bill Chorneau began organising tenants in the 1970s. “I found the whole experience empowering,” he said. “It hooked me for life.”

Now he works with ACCE to address foreclosure issues and applauds the Occupy Movement’s work.

“All of a sudden protesting didn’t seem like such a marginalised activity,” Chorneau said. “The idea of the one percent vs. the 99 percent caught people’s imagination. That really helped change the dynamic; previously the borrower was getting blamed by most people.”

While the fight against foreclosure is among the most visible Occupy targets and perhaps the one that has borne the most concrete success across the country, Occupy has also injected new life into broader struggles for basic rights among the most oppressed groups, especially people of colour.

“Occupy has to reach out…”

The committee, formed in 1989 after the party’s dissolution, preserves and disseminates the party’s history. But more importantly, Dickson says, it teaches about the past, in particular, the party’s 10-point programme – including the right to self-determination, housing, health care and education, ending police brutality and wars of aggression – in order to transform communities today.

“Occupy came on the scene and they have a bigger picture – the 99 percent vs. the one percent – that’s what we’ve been talking about all along,” Dickson said.

“We were talking about U.S. imperialism, particularly the Viet Nam War. We came out denouncing that and took a position…because we recognise a connection between the same class of people who benefit from the wars are also benefitting from the oppression of black people, brown people, and poor whites in the United States.”

Dickson called Occupy’s work an “inspiration to us”, but cautioned that they have some differences with Occupy.

He faults Occupy for not incorporating disenfranchised communities. “Occupy has to reach out to various oppressed groups,” he said. “Every group has a special kind of oppression. The programme needs to be devised on that basis, not just, ‘we’re all in this together.’ You have to have some analysis of the oppression.

“You have to come up with solutions that address those particular problems of the particular people who have experienced that oppression. You can’t solve their problems alone. You can’t be condescending to this group of people. You’ve got to listen to them. And get behind them. Not try to get in front of them.”

Occupy’s most visible actions have been the occupation of public and private spaces for public benefit. They’ve occupied shuttered schools, boarded-up libraries, parks and universities.

In the small town of Albany, California, not far from the University of California, Berkeley, a group that became known as Occupy the Farm, celebrated Earth Day by marching to open space owned by the university, breaking in, bringing out rototillers and seedlings they’d stored nearby, and creating an urban farm.

The struggle to transform this land into an urban farm didn’t start with Occupy. It began 15 years earlier with a coalition of some 30 groups; the coalition was succeeded by other organisations.

Jackie Hermes-Fletcher, a former teacher living in Albany, got involved a decade ago. She said each time she drove by the land, she’d think about how it could be used for children to learn about farming.

She joined Urban Roots, the successor organisation to the coalition. Like the coalition, they tried working with the city and university to get use of the land. “We were pretty much ignored,” Hermes-Fletcher said.

They got city councilmembers elected who promised to fight for the land, but then ignored their promises, she said.

Over the years people have gotten burned out. There were just a few who would go with Hermes-Fletcher to council meetings, especially to oppose a mega supermarket now planned for part of the open space.

But early this year Hermes-Fletcher got invited to a meeting.

“I found myself– it gives me chills – in a room with all these young people,” she said, beginning to choke up. “They were going to occupy the land – it was incredible.” Some were from Occupy Oakland and the others were university graduate students.

The group, joined by dozens of community members, farmed the land for three weeks before university police evicted them. They’ve returned to harvest, then given away hundreds of pounds of vegetables.

“Occupy The Farm showed the community what an urban farm looks like,” Hermes-Fletcher said. The group is keeping future plans under wraps.

“We’ve got a huge burst of energy again, thanks to Occupy the Farm,” she said. “It’s been so heartwarming, so hopeful.”