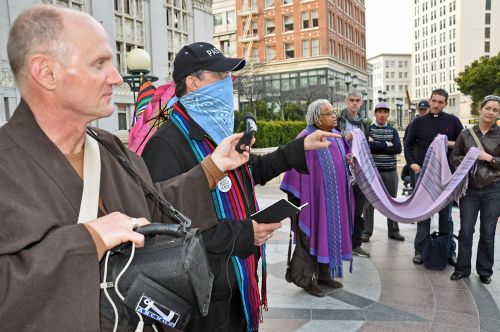 Occupy Interfaith rallies in front of the Oakland City Hall. One pastor wears a mask in solidarity with those banned from the plaza. Credit: Judith Scherr/IPS

OAKLAND, California, Mar 23 2012 (IPS) - A dozen or so people in the Wednesday night crowd of around 150 at the amphitheatre in the public plaza at Oakland City Hall covered their faces with masks or bandanas.

They wanted to make it difficult for police observing the scene to know if activists slapped with judicial orders barring them from the plaza had violated the orders and were at the rally hosted by Occupy Oakland’s Interfaith Committee.

Religious leaders from the Christian, Buddhist, Muslim and Jewish faiths from across the country organised the event, where they called for economic justice and condemned what they said were illegal court orders that banned more than a dozen activists from the physical space that has been the heart of organising for Occupy Oakland since its inception.

“We don’t know if any real people with stay-away orders are with us or not,” said Rev. Doctor Rita Nakashima-Brock, one of the Interfaith Committee rally organisers. “We’re not asking who’s behind the masks.”

Stay-away orders are the newest weapon in District Attorney Nancy O’Malley’s arsenal to control the occupy groups that continue to proliferate in the Oakland-Berkeley area over which she has jurisdiction.

O’Malley issued stay-away orders to Occupy Oakland activists arrested in January, barring most of them from coming within 100 or 300 yards of the public plaza where Occupy Oakland originally set up its encampment and where it continues to hold meetings and rallies.

“They are all clearly violations of First Amendment rights, their right to engage in expressive activity,” said Jivaka Candappa, attorney for two of the four people named in the ACLU writ. “They wanted to break the back of the movement and this is a way of teaching these demonstrators a lesson,” he added.

Candappa underscored that none of those facing stay-away orders has been convicted of a crime. “When someone is still fighting the charges, when they’re still presumed innocent under the constitution, to impose these restrictions on their First Amendment rights, is unreasonable,” he said.

Yvette Felarca is one of 12 Occupy Cal activists hit this week with a stay-away order. Felarca, a recent graduate of UC Berkeley’s School of Education, a middle school teacher in Berkeley and organiser with the campus group By Any Means Necessary, was among the UC Berkeley demonstrators, who, on Nov. 9, attempted to link arms to prevent police from tearing down the tent camp they had established.

(Felarca wasn’t arrested at the time, and only found she was charged with obstructing a police officer and maliciously blocking a sidewalk when she received a letter in early March indicating she was to appear at the arraignment.)

“It’s a political witch hunt by the university administration and also by the district attorney… to suppress our right to defend public education,” Felarca told IPS, further alleging that the DA charged protesters selectively.

“All of us charged have been very prominent or public organisers, activists and leaders,” Felarca said.

Attorney Ronald Cruz said he is submitting a brief Friday to ask the court to reverse the stay-away order for Felarca and two other clients banned from university property.

District Attorney O’Malley declined interview requests, but laid out the logic of the stay-away orders in a San Francisco Chronicle editorial. “These (First Amendment) rights…must be and will be measured and balanced with protecting the safety of our community,” she wrote. “Stay-away orders serve a vital community need to keep the peace, avoid further criminal conduct and maintain safety in public spaces.”

The editorial questions the activists’ motives: “These individuals were not rallying on behalf of Occupy Wall Street, or even the greater Occupy Oakland movement. Rather, they advertise themselves as ‘militant, anti-government, anti-police, and anarchists,’ with a mission to destroy the community fabric of Oakland through the use of violence.”

Pointing to his client, Joanne Warwick, who is an attorney and has never before been arrested, Candappa scoffed at the claim that the activists with stay-away orders are violent.

Candappa said the violence did not come from Warwick. A video of the incident, which took place at a Jan. 28 march, where Occupy Oakland activists were hoping to occupy a vacant convention centre, “clearly shows the officer pushing (my client) with both hands and she tumbles to the ground and she gets arrested by a bunch of other officers,” he said.

Candappa does not dispute claims that there have been acts of vandalism during Occupy Oakland demonstrations. But “to suggest that this entire movement is kind-of one huge gang is just preposterous,” he said.

In the courtroom on Wednesday, attorney Sarah Belletto argued against the stay-away orders for Occupy Cal activist Roman Quintero, a Geography and Ethnic Studies major at UC Berkeley. Belletto entered a not-guilty plea after which a deputy district attorney asked the judge to impose stay-away orders.

Belletto argued that her client was law-abiding and not a risk to public safety. “I cannot believe that a general stay away order is appropriate,” she told the judge. “On Nov. 9, he was exercising his First Amendment rights.”

Judge Paul Seeman imposed the order, saying it was “related to public safety”.

Outside the courtroom, Quintero talked about why he was protesting that day. “I was basically exercising my First Amendment, free speech rights to speak up against the budget cuts, speak up against police brutality, speak out about what’s happening in the U.S. as a whole, with discrimination, class oppression, lack of democracy, lack of transparency,” he said.

Recalling that the university had been home to the Free Speech Movement of the 1960s, attorney Ronald Cruz, also speaking outside the courtroom, accused the government of trying to make an example of the protesters.

“The political forces behind the witch hunt are trying to use the home of the free speech movement to set the precedent nationally that students and others that defend public education will be brutalised and prosecuted,” he said. “This is a nationally prominent case. The students on the campus are going to be key to make sure free speech stays alive in Berkeley.”