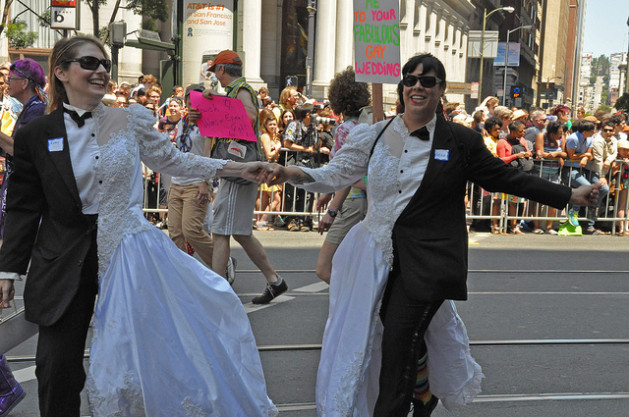 The 43rd San Francisco Pride Parade – the largest of many around the nation and the world – came just four days after the U.S. Supreme Court issued two historic rulings: one overturning a ban on gay marriage in California and the other invalidating part of a 1996 federal law denying spousal benefits to same-sex couples.

Joey Cain was preparing to march with more than 1,000 others in the contingent honouring Bradley Manning, the gay whistleblower on trial in military court for leaking classified documents to Wikileaks.

Dressed in a purple shirt and matching hat, a camouflage skirt that Cain said “reclaimed the colours of the earth back from the military,” and accessorized with a yellow boa and sparkling disco-ball earrings, Cain recounted his earliest experience in the gay rights movement.

“My first gay demonstration was in 1971 in Buffalo, New York, where we stood outside of a gay bar picketing it because it wouldn’t let same-sex people dance together,” he said.

He marveled at how far the movement has come today: “People can actually get federal benefits” for same-sex partners, he said, adding, “It’s amazing; it really is.”

The other electors agreed, but Pride Board President Lisa Williams reversed the decision calling it a “mistake”.

“Bradley Manning is facing the military justice system of this country,” Williams said in a written statement. “We all await the decision of that system. However, until that time, even the hint of support for actions which placed in harm’s way the lives of our men and women in uniform – and countless others, military and civilian alike – will not be tolerated by the leadership of San Francisco Pride.”

But Cain insisted, “We’re still declaring him a grand marshal. I nominated him because I felt that … he wanted that information released so people knew the truth of what was going on so that they could make informed decisions. He put himself in a dangerous position and I felt that was a heroic act. I wanted the LGBTQ community to know more about him and to come out and support him. And we’ve been wildly successful.”

The Bradley Manning contingent – Number 179 out of some 235 contingents – marched behind a banner proclaiming “Pride in our Whistleblower.” Standing in for the jailed Manning and riding in a pick-up truck marked “Bradley Manning Grand Marshal,” was Daniel Ellsberg, 82, who leaked the Pentagon Papers in 1971.

“Free Bradley Manning” placards were carried by individuals walking with many of the other contingents as well and those standing in the crowd.

Removing Bradley Manning as grand marshal wasn’t the only criticism of the Pride parade coming from the left.

Deeg, who uses only one name, criticised what she said she sees as the parade’s increasing “corporatisation.”

“Some of these corporations are criminals. They steal people’s homes,” she said of the sponsorship of various banks, including Wells Fargo, Bank of America and Chase. Other corporate sponsors included breweries, clothing stores and manufacturers, pharmaceutical companies, HMOs, hotels and media. Many corporations and businesses promoted themselves with elaborate floats in the parade.

Another sore point for some was the military recruiters who had a booth at Civic Center, where festivities continued after the parade.

“I am so angry – first the pride committee dishonours a gay hero by rescinding his election, and then they turn around and invite the military to come here and to recruit young, vulnerable people,” said Code Pink activist Xan Joi. “Exposing them to the danger of the military is outrageous.”

The recruiters’ work, however, was interrupted after the parade by members of the Brass Liberation Orchestra, along with a number of anti-war activists, including war veterans. The group surrounded the recruiters and the band played marching music, making interaction with the public difficult for the recruiters.

Along the parade route, spectators stood five-to-ten persons deep. The event kicked off, as always, with Dykes on Bikes riding dozens of motorcycles, many of them flying rainbow flags.

Loud cheers rose from the crowd when Kris Perry and Sandy Stier of Berkeley, and Paul Katami and Jeff Zarrillo of Burbank, rode by in convertibles. It was their challenge that resulted in the court lifting the ban on gay marriage in California. Both couples were married Friday.

Parade participants also included around 150 Mormons, marching behind the Mormons for Marriage Equality banner. “Gay kids grow up Mormon – I’m here to keep them safe,” read one of their signs. The Mormon church poured some 20 million dollars into the fight to support the 2008 ban on gay marriage in California.

There were girl scouts, opponents of circumcision, vegans, Latino parents of gays and lesbians, gay police with colourful balloons tied to their squad cars, a hotline for youth trying to understand their sexuality, a bagpipe brigade, and lots of individuals celebrating their relationships, such as one couple holding the sign: “16 years + 3 children, 1 grandchild – finally married. Proud of My Family.”

Alex Aldana, who said he’s undocumented and queer, marched with Undocuqueer behind the banner: “Don’t stop at Marriage. Queers are getting deported.”

“If I happened to be dating someone who is also undocumented, we wouldn’t be able to sponsor each other because he is not a citizen.”

Aldana said the Supreme Court decisions are a great victory. But he cautioned, “We want all of our immigrant families to be included in that conversation. That’s a human right.”