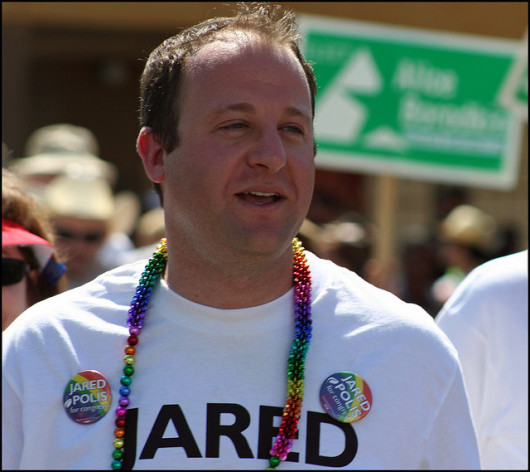 Colorado's Jared Polis became the first “out” gay man in Congress when he was elected in 2008. Credit: Jeffrey Beall/cc by 2.0

ATLANTA, Georgia, Mar 26 2013 (IPS) - Even as the issue of gay marriage continues to make waves in the U.S., change is inexorably arriving in the halls of power, with a record seven openly homosexual or bisexual members of the new U.S. Congress.

While still small, the number represents a significant gain since the previous congress, which had only four.

To be clear, our Congress has never looked like America.

“In 2012, we nearly doubled the number of members in congress who were LGBT, including the first U.S. senator, so 2012 was a really important moment for the normalisation of having LGBT people in the federal legislature,” Denis Dison, vice president of communications for the Victory Fund, an organisation that raises funds for “out” or openly LGBT candidates, told IPS.

The four from the previous Congress were Reps. Barney Frank from Massachusetts, Tammy Baldwin from Wisconsin, Jared Polis from Colorado, and David Cicilline from Rhode Island.

Things were looking bleak last year when Frank, a progressive in Congress who had served since 1980, decided to retire, and Baldwin decided to run for the U.S. Senate. This could have left Polis and Cicilline as the only gay voices in the House of Representatives.

The current seven are Cicilline, Maloney, Pocan, Polis, Sinema and Takano in the House, and Baldwin in the Senate.

“I’m very excited this Congress [House] has six LGBT members, which is a record. While it doesn’t represent parity with the general population, at least it’s movement in the right direction,” Polis told IPS.

Asked what parity might be, Polis said that about five percent of the U.S. population is part of the LGBT community.

“You’d be talking about 20 to 30 members from the LGBT community,” out of the 435 members of Congress, Polis said.

“We also don’t have parity of representation of women. We’re also making progress but not yet there with other democratic minority groups,” he added.

“To be clear, our Congress has never looked like America,” Dison said. “Women have never been [adequately] represented, neither have people of colour. Parity would be an achievement for a minority population.

“White, straight [heterosexual] men are absolutely over-represented in politics and have been for many, many years,” he said.

The first openly homosexual member of congress, Gerry Studds of Massachusetts, was essentially forced to come out in 1983 due to an ongoing scandal involving his relationship with a 17-year-old male Congressional page.

When Barney Frank was first elected in 1980, it would be seven more years before he came out publicly. Yet times have changed. Baldwin became the first “out” elected Congressperson, when she was elected to the House in 1998. Polis became the first “out” gay man in Congress when was elected in 2008. He came out to his parents at the age of 21 and they were not only supportive, but enthusiastically supportive, he told the Metro Weekly magazine in 2009.

Polis served as an out gay businessman who helped start several charter schools in Colorado before running for congress. He and his partner, Marlon Reis, have a son, Caspian Julius, who was born in 2011. They have declined to comment on whether their child was adopted or born from a surrogate pregnancy.

Polis tells IPS that since he went to congress he has experienced no open discrimination or homophobia there from other members.

“No, I don’t think so. They all come from different backgrounds. There’s never been any issues. Everyone understands everyone is duly elected,” Polis said. “The issue is, we still don’t have benefits for our spouses. That’s a great frustration.”

But that may change.

“Having six members enables members of our community to be present in many different committees. It’s a different discussion when there’s an LGBT person in the room,” Polis said.

Asked whether his sexual orientation shapes his perspective, Polis replied, “Every member brings a unique perspective informed by their life experiences.

“Our body is best when we’re represented by America as a whole, the types of jobs people have, the types of families they have, in terms of their ethnic background and faith,” Polis said.

“You do see LGBT members of congress interested in other issues of discrimination, whether racial discrimination or sex discrimination, and see them part of coalitions as well, that is part of a shared experience of being in a minority,” Dison said.

Currently, there are no LGBT members of congress who are Republicans. They are all Democrats.

However, in the past, there have been two Republican members, who both came out while serving their terms – Jim Kolbe of Arizona and Steve Gunderson of Wisconsin.

And the LGBT caucus in Congress is beginning to become more diverse politically, at least within the spectrum of ideas represented by the Democratic Party. Two of the newly elected members, Takano and Sinema, were both elected in swing districts that are not solidly progressive districts, and Maloney unseated a Republican.

The changes in U.S. culture with respect to sexual orientation are perhaps best captured by the recent campaign speech of Mazie Hirono, a progressive congresswoman from Hawaii, who was elected to the Senate in November 2012.

“I bring quadruple diversity to the Senate,” Hirono said at a rally. “I’m a woman. I’ll be the first Asian woman ever to be elected to the U.S. Senate. I am an immigrant. I am a Buddhist. When I said this at one of my gatherings, they said, ‘Yes, but are you gay?’ and I said, ‘Nobody’s perfect.'”