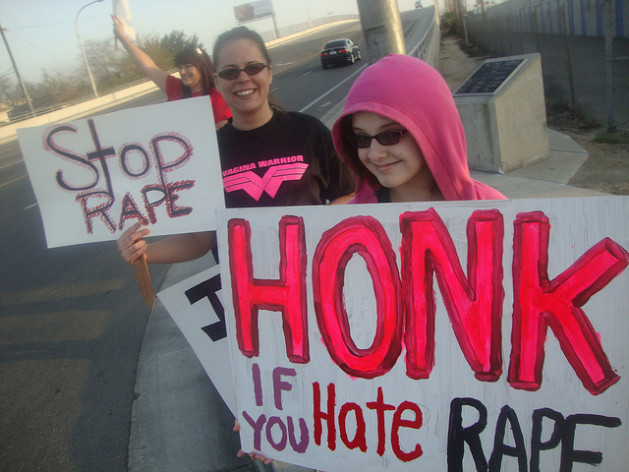 WASHINGTON, Mar 1 2013 (IPS) - The U.S. House of Representatives on Thursday ended more than a year of stonewalling a piece of legislation that for two decades has offered legal protections for women against sexual violence, harassment and abuse.

The move will close gaps in related funding and safeguards that have opened since the legislation, known as the Violence Against Women Act (VAWA), lapsed in September 2011. It will also offer renewed protections for Native American women and immigrants, regardless of their legal status, and, for the first time, will extend similar guarantees to sexual minorities.

“Today’s victory marks a rare occasion when Republicans and Democrats came together to ensure explicit protections in the federal code for ‘sexual orientation’ and ‘gender identity’,” the Human Rights Campaign, an advocacy group here, said Thursday. “It is also the first time that any federal non-discrimination provisions include the LGBT community.”

The Republican objections were clearly part of an attempt to strip away the things that have made VAWA more inclusive and less racist.

The Democratic-held Senate had previously passed a well-received version of the bill, prompting some 1,300 advocacy and professional groups in mid-February to call for its passage. But inaction on the part of House Republicans has continued to stymie movement.

Finally, a last-minute attempt by House Republicans to offer up a weaker alternative failed Thursday morning, and the chastened Republican leadership allowed a straight vote on the Senate version. That resulted in a 286-138 vote that included 87 Republicans supporting the measure, which will now be sent to President Barack Obama for authorisation.

“Over more than two decades, this law has saved countless lives and transformed the way we treat victims of abuse,” President Obama said Thursday, lauding the vote. “Renewing this bill is an important step towards making sure no one in America is forced to live in fear.”

Advocates from across civil society have praised both the passage of the bill and its strengthened form.

“This has been a very difficult process, but we’re glad that in the end all victims were protected and no groups were left out,” Mony Ruiz-Velasco, legal director for the National Immigrant Justice Center, told IPS.

“One of the most important points from our perspective is that the new bill clarifies provisions in the law that will allow children of victims of crimes to apply for visas to remain with their families. It also extends the application of the Prison Rape Elimination Act to immigration detention facilities.”

Immigrant women have historically experienced relatively higher levels of domestic abuse but have had fewer mechanisms for judicial recourse, particularly if they were in the United States illegally.

Potentially an even more egregious situation has afflicted Native American women, who have long had no way to seek justice if they were sexually assaulted on tribal land by a non-tribal assailant. While most civil laws on Native American lands are enforced by tribal judicial systems, these courts have never had jurisdiction to prosecute non-tribal members.

Nonetheless, according to statistics provided by Amnesty International, a watchdog group, a third of Native American women will be raped in their lifetimes, and 86 percent of the time the assailant will be a non-Native American man.

“Today the drum of justice beats loud in Indian Country in celebration of the re-authorisation of VAWA,” Juana Majel Dixon, first vice-president of the National Congress of American Indians, said Thursday.

But, she added, “500-plus days is too long to not have a bill for all women in America. For an unimaginable length of time, those who have terrorised our women … have gone unprosecuted.”

Targeting the most vulnerable

Lawmakers originally passed VAWA, widely considered a landmark piece of legislation, in 1994, requiring its re-authorisation every five years. And in past years, the law has always received broad, near unanimous, bipartisan support.

By contrast, the past year of intense politicisation on the issue has been blamed on a new crop of hardline conservatives, who expressed reservations over the expansion of legal protections to include undocumented immigrants and sexual minorities. Many were also sceptical of the new powers vested in tribal authorities

On Thursday, the House Republicans’ alternative VAWA bill would have stripped out language on sexual minorities while weakening the provisions on Native American women. These measures also reportedly held up further movement last year.

“The politicisation of this re-authorisation is, plain and simple, part of the war on women,” Lisa Brush, an associate professor of sociology at the University of Pittsburgh, told IPS.

“The Republican objections were clearly part of an attempt to strip away the things that have made VAWA more inclusive and less racist. These groups, together with LGBTQ people, are among the most vulnerable to gender-based violence, and the Republicans’ political stance is basically saying the law-and-order state is not going to protect them.”

Brush, the author of a book called “Poverty, Battered Women, and Work in U.S. Public Policy”, suggests that the fight against VAWA is indicative of a broader attempt on the part of Republicans to strengthen the “police state” while gutting the “welfare state”. Yet she also implies that VAWA too plays into this dynamic.

“What would really help reduce violence against women would be to make sure that women have the capacity to form autonomous households, to control when and how many children they have and how they raise them, and to form and unform relationships with whomever they want,” she says.

“For that, we would need equal pay for work of comparable value, and to completely change the way that we organise work, family and personal responsibility for earning and caring. That is what would really make a difference – not just better policing. But better policing is what we get.”