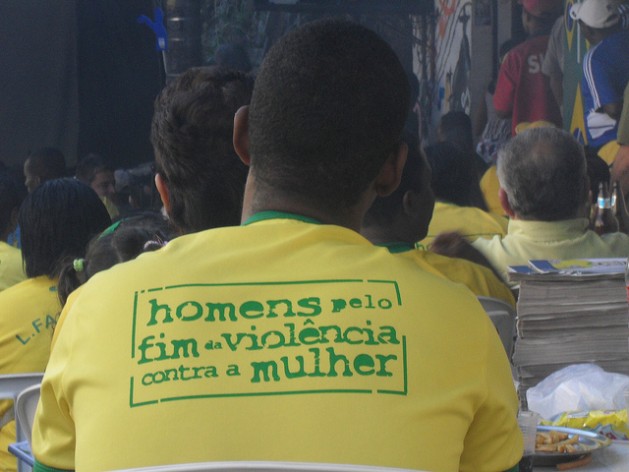 Men for an End to Violence against Women, a slogan on a T-shirt in Santa Marta, Brazil. Credit: Fabiana Frayssinet/IPS

UNITED NATIONS, Feb 25 2013 (IPS) - Some of the most harrowing cases of gender-based violence Kathryn Bolkovac came across while working as a U.N. human rights investigator in Bosnia involved a perpetrator dubbed “the Doctor” by the women and girls he abused.

“It was (‘the Doctor’s’) practice to insert Deutsche Mark coins into the vaginas of young girls as they danced (in strip clubs),” she told IPS.

Gender inequalities were so deeply rooted into social structures that even men who worked for the U.N. participated in sexual harassment of various forms.

Gender-based violence, including psychological and sexual abuse, often represents a perverse expression of dissatisfaction with regard to power and self-worth on the part of the perpetrator.

“My fellow International Police Task Force monitor… admitted to me (and U.N. management) that he had (purchased) a young girl from a local bar in Ilidža to keep at home with him as his ‘girlfriend’,” said Bolkovac.

Men who worked at the U.N. Mission in Bosnia Herzegovina (UNMIBH) hung pictures with “inappropriate depictions of women” on the walls of their offices, she added.

And DynCorp employees – who are private military contractors embedded with the U.N. – circulated rape tapes around military bases, she noted.

Bolkovac herself also faced harassment: “The U.N. personnel manager approached me to introduce himself and to tell me I was ‘kind of cute’,” she told IPS.

“(In another case,) the contingent commander invited me to a Fourth of July celebration at the U.S. embassy and asked what type of undergarments I might be wearing,” she said.

Bolkovac presented her book, co-written with Cari Lynn and entitled The Whistleblower: Sexual Trafficking, Military Contractors and One Woman’s Fight for Justice, at the U.N. Bookshop at the start of this month.

Her story also inspired a film directed by Larysa Kondracki, entitled “The Whistleblower”, which was screened at U.N. headquarters in October 2011, following a special request from Secretary-General Ban Ki-moon. A panel discussion with senior U.N. officials on violence against women and girls ensued.

On Feb. 14, 2013, Ban delivered a message in support of One Billion Rising, a daylong exclamation that showcased the solidarity and collective strength of women across the globe. The number “one billion” referred to the estimate that one in every three women is raped or beaten in her lifetime.

But on the same day as One Billion Rising, another occurrence rattled the gender frameworks. It involved a world renowned Olympian, known as the “Blade Runner”, who shot and killed his girlfriend while she sat on the bathroom stall.

Oscar Pistorius is a South African athlete with carbon-fibre racing legs. Once seen as a role model for young amputees, Pistorius fell from grace when he allegedly murdered Reeva Steenkamp on Valentine’s Day.

This happened shortly after 17-year-old Anene Booysen was gang raped and mutilated to death. The perpetrators abandoned her body at a construction site not far from her home.

Both events brought attention to widespread gender-based violence, the topic of the upcoming Commission on the Status of Women’s (CSW) 57th session, to be held at U.N. headquarters Mar. 4-15.

According to a synthesis report entitled “Addressing Inequalities”, gender-based violence reflects “unequal power relations between men and women, girls and boys – in the economic, social (including legal) and political spheres.

“Gender-based violence, including psychological and sexual abuse, often represents a perverse expression of dissatisfaction with regard to power and self-worth on the part of the perpetrator.”

Dean Peacock, co-founder and executive director of the Sonke Gender Justice Network, told IPS, “In South Africa, like in the U.S., there’s a very strong association between gun ownership and manhood.”

Bushmaster Firearms International, the same company that produced the .223 calibre semiautomatic rifle used in the mass shooting of a school in Newtown, Connecticut, ran an advertising campaign labelling Bushmaster guns as a “Man Card”.

Peacock explained the dangers surrounding notions of masculinity in South Africa, where much of the population suffers from long-term structural unemployment.

“Men face a social expectation and a social pressure to be able to provide for their families – make sure their children can go to school, put food on the table – but they’re (often) not able to do that, so they carry around a tremendous sense of failure,” he said.

“They internalise and blame themselves for what are structural problems created by our economic policies and (South Africa’s) position in the global economy. Men then compensate for their failure to live up to that pressure by engaging in a range of risky practices that grants them some fleeting sense of either escape or power,” he continued.

Many consume alcohol to deal with their sense of failure. “There’s also a social expectation generated in a significant part by the world of advertising that men should drink, and that drinking is a mark of being a man,” said Peacock.

“So if you (consider) the nexus of alcohol, guns, and – perhaps most importantly – the social pressure and expectation that men be dominant in their relationships with women (and) have the ultimate authority in their relationships and their homes… you’ve got a recipe for men’s violence against women,” he explained.

He advocated for psychosocial support for children exposed to violence, as well as policies in the education sector that integrate topics related to gender equality into the curricula.

Peacock also warned of the dangers facing women and girls in conflict and post-conflict situations, when there is a lack of legal systems to hold people accountable for their actions.

The U.N. is currently constructing a new development framework, known as the post-2015 development agenda, to replace the Millennium Development Goals when they expire in 2015.

A public consultation took place online and through social media platforms under the auspices of the U.N. Development Group between September 2012 and January 2013, focused on addressing inequalities.

It culminated with a public dialogue, which featured civil society experts and U.N. officials, who met from Feb 18-19 in Copenhagen.

One reoccurring topic brought up by both the public participants and the experts in discussion was how to incorporate gender-based violence – something that the MDGs failed to address – into the new development framework.