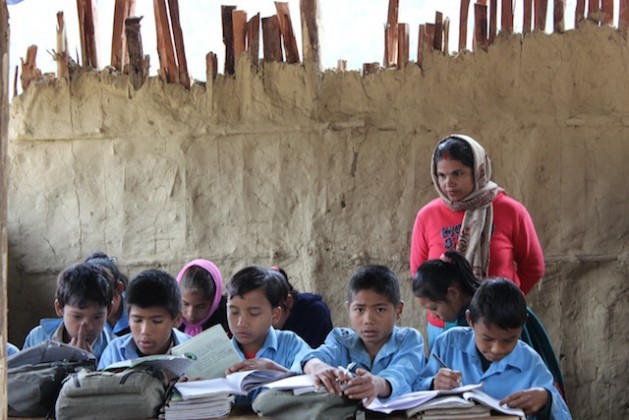 Kids work side by side at a temporary school for those displaced by floods in eastern Nepal. Many children experience trauma, fear or other psychological impacts of natural disasters, but few receive the necessary treatment. Credit: Mallika Aryal/IPS

He was warning Hari’s family to move out of the house immediately because they were getting flooded. It had been raining non-stop for a couple of days. Hari could hear the water gushing. He grabbed his sister’s and grandfather’s hands, waded through knee-deep water in his living room, and ran as fast as he could.

“Advocating for mental health itself is such a big challenge in Nepal. We are not even close to getting specialised services such as mental health programmes that focus entirely on children." -- Shristee Lamichhane, mental health advisor with the United Mission to Nepal (UMN)
On the other side of the village, on much higher ground, is a primary school. They took shelter there for the night as heavy rains devastated the village, washed away Hari’s school and his neighbours, and inundated his house.

“Life changed forever for us that night,” says Hari’s father, Dhan Bahadur Karki. The floods and landslides that took place in Surkhet district in mid August last year affected more than 24,000 people, according to the District Disaster Relief Committee, a Nepal government-led coalition of international aid organisations and local NGOs.

The disaster displaced 12,000 people and killed 24; 90 still remain missing. More than 40 percent of those affected were children. For them, experts say, the horror of surviving such a disaster does not simply fade away; often, it lingers for a lifetime.

“Children lose their homes, school, friends and family members,” says Manoj Bist, a child protection officer with Save the Children, Nepal, which has been working in the flood affected areas of mid-west Nepal. “When their support system is lost, children become vulnerable to violence, disease and abuse.”

Five months since the disaster, those displaced by floods are still living in tents. Karki’s family has pitched their tent across the river from where their home used to be. “I see what used to be my house from my tent everyday, but I can’t get myself to go back there and try to rebuild,” says Dhan Bahadur Karki.

Along with their belongings, the flood washed away the little saving they had in the house. So money is tight for the Karki family and Dhan Bahadur is planning to leave for Malaysia to work in a mobile phone factory as soon as he gets a visa.

Even as Dhan Bahadur plans his departure, he is most worried about his two children and the state of their mental health.

Hari complains about not being able to concentrate at school. A good student before the floods, his grades have slipped. “I can’t fall asleep at night and when I do, I have nightmares,” says Hari as he comes out of his temporary classroom in a bamboo trailer. Last month, Hari could not be found on his bed at night. When his relatives went looking for him, they found him near the woods, sleepwalking.

“The kind of psychological stress a child goes through after a natural disaster is profound, and has to be dealt with early on in life so it doesn’t have a long-term consequence ” Saroj Prasad Ojha, associate professor in the department of psychiatry at the Tribhuvan University Teaching Hospital (TUTH) in Kathmandu, tells IPS.

In Nepal, there is a near-total absence of official data on the number of children in need of mental health care, from young victims of sexual abuse and domestic violence, to children affected by natural disasters, to kids suffering from conflict-related stress and trauma.

Still, health professionals and social activists here say it is a major issue that calls for swift government action.

The World Health Organisation estimates that 450 million people worldwide have a mental disorder, and mental illnesses account for 13 percent of the global disease burden.

There are no official numbers for the 28 million in Nepal, but the Christian charity United Mission to Nepal (UMN) that works on mental health issues estimates that approximately 20-25 percent of all out-patients attending primary health care services show some kind mental or behavioral disorder often presented with multiple physical complaints.

“The problem lies in the fact that mental illness is not seen as a health issue,” says Sailu Rajbhandari, clinical psychologist with Transcultural Psychosocial Organisation (TPO)-Nepal.

Other mental health-care providers such as clinical psychologists, social workers and nurses are even more scarce.

“Advocating for mental health itself is such a big challenge in Nepal. We are not even close to getting specialised services such as mental health programmes that focus entirely on children,” says Shristee Lamichhane, mental health advisor with UMN.

“Our society and health system cannot even grasp the concept that children can have mental health issues,” says Kunwar. He says children’s trauma may be disguised and could manifest in the form of physical ailments because children cannot clearly express grief or fear.

A crucial link in the developmental chain

Experts say that mental health should be prioritised along with the other developmental goals of the country.

“It is surprising that children’s mental health is often left out from our development plans, considering children are the future, the next productive generation of the country,” explains Ojha of the Tribhuvan University Teaching Hospital.

Official data on the number of children affected by Nepal’s decade-long ‘People’s War’ that ended in 2006 is missing. However, a 2008 National Human Rights Commission report states the war orphaned over 8,000 children and displaced over 40,000 children.

Few, if any, of them are receiving necessary mental health services.

There is also an urgent need to prioritise mental health at the local level. Lamichane of UMN recommends stationing trained mental health professionals at the 30 public hospitals across Nepal.

“But mental health has to be integrated at the primary health care level because that is where patients first come with their problems,” says Lamichhane.

Nepal is a party to the United Nation’s global commitment to prevention and control of non-communicable diseases. In 2014, the country formulated the Multi Sectoral Action Plan for Prevention of Non-Communicable Diseases 2014-2020, which positioned mental health as one of the country’s priority areas.

Psychiatrists and mental health professionals are hopeful that this move will encourage the government to pay attention.

“It may be slow, but mental health issues are getting a little more attention than they were a few years ago,” says Lamichhane “This is the time to make a case for children, really hammer the issue home so that the issue of children’s mental health is not forgotten,” adds Lamichhane.

In Paagma village, local psychosocial counselor Santoshi Singh has begun working with Hari and his sister. “Depending on what his case is like, there are a few things I can do to help Hari as a counselor,” says Singh, “But if the case is severe, I am really unsure where I can send him so he can get the kind of help that he needs.”