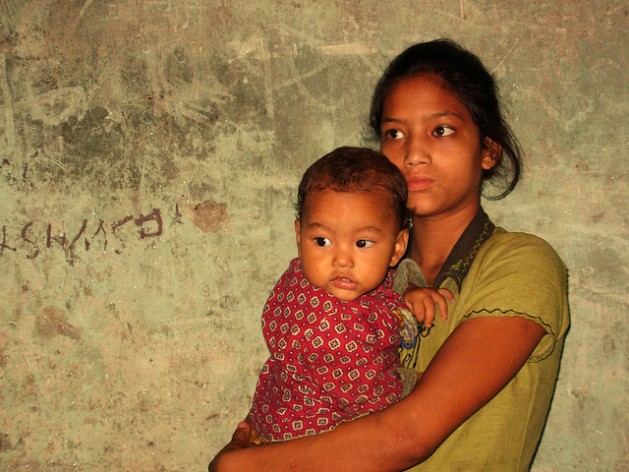 Relief workers and aid agencies are worried about the security, protection and psychological health of women and children in post-disaster settings. Credit: Naresh Newar/IPS

DABI, Nepal, Aug 27 2014 (IPS) - Living in a makeshift tarpaulin shelter, which barely protects her family from the torrential rainfall or scorching heat of this remote village in southern Nepal, 36-year-old Kamala Pari is under immense stress, worrying about her financial security and children’s safety.

The family’s only house and tiny plot of farmland were completely destroyed by the massive landslide on Jul. 2 that struck the village of Dabi, part of the Dhusun Village Development Committee (VDC) of Sindhupalchok district, nearly 100 km south of the capital Kathmandu.

Dhusun was one of the four VDCs including Mankha, Tekanpur and Ramche severely affected by the disaster, which killed 156 and displaced 478 persons, according to the ministry of home affairs.

This was Nepal’s worst landslide in terms of human fatalities, according to the Nepal Red Cross Society, the country’s largest disaster relief NGO.

“My students are too scared to return to their classrooms. They really need a lot of counseling." -- Krishna Bhakta Nepal, principal of Jalpa High School
Though the government is still assessing long-term damages from that fateful day, officials here tell IPS the worst victims are likely to be women and children from these impoverished rural areas, whose houses and farms are erected on land that is highly vulnerable to natural catastrophes.

Left homeless and further impoverished, Pari is worried about the toll this will take on her children, who are now living with the reality of having lost their home and many of their friends.

“We’re not just living in fear of another disaster but have to worry about our future as there is nothing left for us to survive on,” Pari told IPS, adding that their monthly income fell from 100 dollars to 50 dollars after the landslide.

Her 50 neighbours, living in tarpaulin tents in a makeshift camp on top of a hill in this remote village, are also preparing for hard times ahead.

“We lost everything and now we run this shop to survive,” 15-year-old Elina Shrestha, a displaced teenager, told IPS, gesturing at the small grocery shop that she and her friends have cobbled together.

Their customers include tourists from Kathmandu and nearby towns who are flocking to destroyed villages to see with their own eyes the landslide-scarred hills and the lake created by the overflow of water from the nearby Sunkoshi river.

Relief workers and protection specialists from government and aid agencies told IPS they are worried about the security, protection and psychological health of women and children.

An estimated 50 children were killed in the landslide, according to the ministry of women, children and social welfare.

“In any disaster, children and women seem to be more impacted than others,” Sunita Kayastha, chief of the emergency unit of the United Nations Children’s Fund (UNICEF) told IPS, adding that they are most vulnerable to abuse and violence.

Women and children are 14 times more likely than men to die in a disaster, according to a report by Plan International, which found adolescent girls to be particularly vulnerable to sexual violence in the aftermath of a natural hazard.

Senior psychosocial experts recently visited the affected areas and specifically reported that children and women were under immense psychological stress.

“The children need a lot of counseling [and] healing them is our top priority right now,” Women Development Officer Anju Dhungana, point-person for affected women and children in the Sindhupalchok district, told IPS.

Dhungana is concerned about the gap in professional psychosocial counseling at the local level and has requested help from government and international aid agencies based in Kathmandu.

Schools are gradually being resumed, with the help of aid agencies who are identifying safe locations for the children whose classrooms have been destroyed.

One school was totally destroyed, killing 33 children, and the remaining 142 children are now studying in temporary learning centres built by Save the Children and the District Education Office, officials told IPS.

A further 1,952 children who attend schools built close to the river are also at risk, experts say.

Trauma is quite widespread, the sight of the hollowed-out mountainside and large dam created close to the river still causing panic among children and their parents, as well as their teachers.

“I lost 28 of my students and now I have [the] job of healing hundreds of their school friends,” Balaram Timilsina, principal of Bansagu School in Mankha VDC, told IPS.

“My students are too scared to return to their classrooms. They really need a lot of counseling,” added Krishna Bhakta Nepal, principal of Jalpa High School of Khadichaur, a small town near Mankha.

International agencies Save the Children, UNICEF and the United Nations Population Fund (UNFPA) are helping the government’s efforts to restore normal life in the villages, but it has been challenging.

“We need to help children get back to school by ensuring a safe environment for them,” Sudarshan Shrestha, communications director of Save the Children, told IPS.

The international NGO has been setting up temporary learning centres for hundreds of students who lost their schools.

Shrestha’s concern is not just for the children but also the young women who are often vulnerable in post-disaster situations to sexual violence and trafficking.

“The risk of sexual exploitation and trafficking is always high among the families impoverished by disaster, and during such situations, girls are often hoaxed and tricked by traffickers,” explained Shrestha.

Sindhupalchok, one of Nepal’s most impoverished districts, is notorious for being a source of young girls who are trafficked to Kathmandu and Indian cities, according to NGOs; a recent report by Child Reach International identified the district as a major trafficking centre.

“Whenever disaster strikes, the protection of adolescent girls should be highly prioritised and our role is to make sure this crucial issue is included in the disaster response,” UNFPA’s country representative Guilia Vallese told IPS, explaining that protection agencies need to be highly vigilant.

Government officials said that although there have been no cases of sexual or domestic violence and trafficking, they remain concerned.

“There are also a lot of young girls displaced [and living] with their relatives and after our assessment, we found that they need more protection,” explained officer Dhungana.

She said that many of them live in the camps or in school buildings in villages that are remote, with little or no government presence.

The government has formed a committee on protection measures and will be assessing the situation of vulnerability soon to ensure that children and women are living in a secure environment.