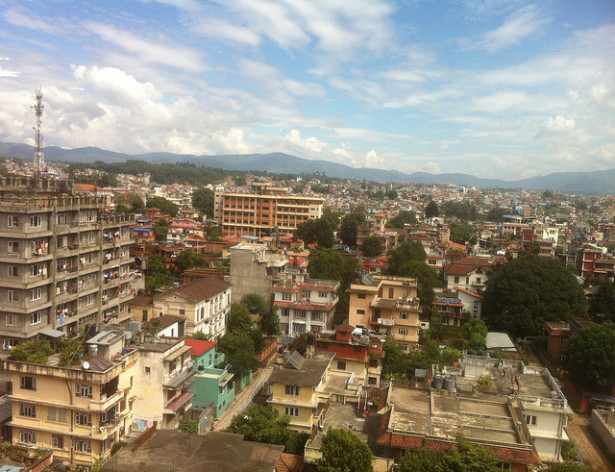 Over 90 percent of the buildings in Kathmandu could collapse in the event of an earthquake. Credit: Naresh Newar/IPS

KATHMANDU, Jul 12 2013 (IPS) - As the chief of building codes and earthquake safety of the Lalitpur Municipality, located about 10 km from Nepal’s capital, Kathmandu, Sainik Raj Singh has the tough job of cracking down on builders who fail to comply with the government’s construction regulations.

“One can make many enemies by enforcing the codes but it is high time that we follow the rules strictly,” the official told IPS in his office in Lalitpur.

"I am afraid a major earthquake will happen and we will all look back at this time and ask why more was not done and how many lives could have been saved." -- Moira Reddick, coordinator of the Nepal Risk Reduction Consortium (NRRC).
Singh is not on a power trip – he is simply concerned about the number of unplanned buildings in Kathmandu, which has been ranked the world’s most ‘at-risk’ city for earthquakes by GeoHazards International (GHI).

Situated on top of the active Indian tectonic plate, which is constantly pushing up against the Tibetan tectonic plate, Kathmandu was found to be extremely vulnerable to seismic activity, which can cause landslides and fires as well as quakes.

While the city’s 1.5 million residents are on red alert, the city itself is unprepared for what experts believe is an inevitable disaster: the National Society for Earthquake Technology (NSET) estimates that over 90 percent of existing buildings in Kathmandu and other cities in Nepal are non-engineered.

Over 3,000 non-engineered houses are added every year in the capital, according to the Nepal Risk Reduction Consortium (NRRC), a body comprised of government agencies, donors, the International Committee of the Red Cross (ICRC) and representatives of the United Nations.

An earthquake measuring a magnitude of 8.0 on the Richter could kill 100,000, injure 300,00 people and displace over a million within seconds, unless disaster preparedness measures are immediately identified and implemented.

Nepal’s National Building Code was introduced in 1994 in the aftermath of the 1988 earthquake that killed 721 people in east Nepal and destroyed a large number of buildings that were not earthquake resistant.

Nearly 25 years later, implementation is gradually becoming a reality, with the government actively supporting municipalities in their efforts to regulate construction, said Singh.

He believes the first step is to ensure that residential, school and commercial buildings can withstand an earthquake of any size and scale.

The 7.0-magnitude earthquake that struck the Caribbean nation of Haiti in 2010, killing 200,000, displacing 1.5 million and destroying 70 percent of all buildings including 250,000 residences and 30,000 commercial buildings, was a major wake-up call for this South Asian country of 30.9 million people.

Many of the buildings that crumbled in Haiti, like those in Nepal, were built without the input of an architect or engineer.

In Nepal, the primary concern is for schools and the safety of children. There are an estimated 82,170 buildings in 33,160 public schools in Nepal, of which 50 percent need to be reconstructed, according to NSET.

Over 2,000 schools are situated in Kathmandu alone, but due to lax imposition of building regulations, 60 percent of them are sitting ducks for the fallout from quakes, which would endanger the lives of 100,000 students.

A recent NSET engineering investigation concluded that the frailty of buildings was due to the use of traditional materials such as adobe, stone rubble in mud mortar or brick in mud mortar, as well as poor maintenance and flimsy roofs.

“We need to start retrofitting all the school buildings for the safety of school children who will be most at risk during an earthquake,” Hima Shrestha, senior structural engineer of NSET, told IPS.

This summer, NSET, with the help of the Asian Development Bank (ADB), began retrofitting 50 of the most earthquake vulnerable public schools.

The entire process, which involves trained masons adding supportive iron rods and pillars between floors, strengthening the foundations and reworking walls and flooring, can take months, and will likely only be completed by the end of the year.

NSET is now conducting a rapid assessment on the status of schools and the 125 major hospitals spread around Nepal with assistance from the World Bank, in the hopes of retrofitting as many buildings as possible.

According to the ministry of home affairs, this past year has seen better preparedness than previous years.

“The government is very serious about preparedness and there is now action on the ground,” said Pradeep Koirala, under-secretary of the home affairs ministry and senior official of the disaster management section.

Koirala’s office is taking the lead in national disaster preparedness through a newly established 24-hour National Emergency Operations Centre (NEOC), which plans to open similar centres in all of Nepal’s 75 districts.

The NEOC will be the first point of contact during emergencies, capable of coordinating domestic and international humanitarian aid and dispatching disaster relief supplies. It is also equipped with early warning systems, and will disseminate alerts to local government offices.

“We have seen an incredible increase in leadership, commitment and confidence from the government in strengthening preparedness at the national and community level,” says Moira Reddick, coordinator of the NRRC.

Today, the NRRC is tasked with implementing the National Strategy for Disaster Risk Management, a five-year initiative that began in 2011 armed with a budget of 195.8 million dollars, whose top priorities are ensuring school and hospital safety by retrofitting buildings, conducting emergency drills and training staff to respond to a crisis.

A national simulation planned for Jun. 20 to test the efficacy of emergency responders was cancelled when floods and landslides struck west Nepal on Jun. 16, killing over 16 people and leaving 875 families displaced, according to the U.N.

Another national simulation, this one led by the Tribhuvan International Airport (TIA) and the Civil Aviation Authority of Nepal (CAAN), with support from the U.S. government, is scheduled for September, with the aim of testing the preparedness of the army, police units, hospitals and airports.

The main challenge now is overcoming a severe shortage of donors, experts say.

She also highlighted some pressing “institutional blockages”, including the lack of a formal Disaster Management Act outlining the government’s policy on how to strengthen preparedness.

“Without overcoming these blockages and without continued support… from donors, I am afraid a major earthquake will happen and we will all look back at this time and ask why more was not done and how many lives could have been saved,” she concluded.