KATHMANDU, Dec 31 2011 (IPS) - Four months after her murder, you can see Rosy Maharjan flashing the two- finger victory sign – from a Facebook page. With police arresting the 21-year- old’s boyfriend and the people he hired to kill her due to jealousy, agitated civil society members have opened accounts on social networking sites, demanding justice for the slain college student. 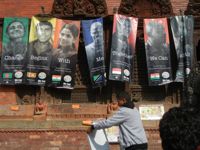 A protest campaign in Kathmandu to demand change for women. Credit: Sudeshna Sarkar/IPS.

Rosy’s killing in August was followed by a stunning double murder. A drunken father in western Parbat district threw his two daughters, aged six and eight years, into a river, and tried to make the killings look like abduction and murder by kidnappers.

Siyadevi Mandal, 45, has survived 13 murderous attacks. The woman from Mahadeva village in southern Nepal’s Saptari district cries inconsolably as she describes how she has been branded a witch. If someone falls ill in the village, crops fail or cows yield less milk, she is accused of black magic.

Last month, Siyadevi had to be admitted to hospital after being severely injured by neighbours who blamed her for their daughter’s illness. Eight years ago, Siyadevi’s mother-in-law Durgadevi died after villagers assaulted her following a livestock mishap.

Human rights defenders say violence against women is spiralling despite the end of a civil war in 2006.

Domestic violence tops the list, accounting for 64 percent of the attacks. It is followed by social violence (17 percent), rape (8 percent) and murder (4 percent). The attackers are the husband (74 percent) and family members (26 percent). In cases of murder, the husband’s involvement shoots up to 85 percent.

The yearbook also records 293 rapes and 54 incidents in which women were accused of practising witchcraft and beaten up, stripped, force-fed human excreta and treated to other savageries.

The escalating attacks come despite Nepal’s government kicking off a campaign last year to end violence again women by December 2010. The high-profile movement included setting up a telephone hotline in the Prime Minister’s Office.

Sarada Pokhrel, founding member of Women Security Pressure Group, an NGO taking part in the ‘WE CAN end all violence against women’ movement in South Asia, blames it on the continued political turmoil in Nepal.

“We have been in a transitional phase since the 2008 elections, waiting for a new constitution and a new elected government,” she says. “With a succession of weak governments, there is a growing sense of frustration and a culture of impunity. Women become targets of both.”

Rights activists note with dismay that the age of rape victims is going down; in many cases, the attackers are teenagers. According to Informal Sector Service Centre (Insec), Nepal’s largest human rights organisation, 190 rape victims were below 18 and six below 10. Twenty were killed.

“Many incidents of domestic violence remain unreported and many reported incidents reach a compromise, either initiated by police or society itself,” says Bijay Raj Gautam, Insec’s executive director. “Very few cases of rape are made public as rape is a secret crime. The victims face social stigma in both cases.”

Gautam narrates two incidents to illustrate his point. Two sisters, aged 10 and eight, were raped by a teenaged youth in Syangja district. The girls’ family decided to hush it up after villagers threatened them with ostracisation.

In Khotang in eastern Nepal, a woman was set on fire by her husband. Though her sons complained to police, the victim withdrew the charge, saying she had an accident.

With Nepal shooting past Bangladesh and the Philippines in the migration of blue-collar workers abroad, families are breaking up and domestic violence is increasing.

“When the husband goes to work abroad, the wife faces violence at home,” says Mohana Ansari, member of the National Women’s Commission. “Neighbours or in-laws are accusing migrant workers’ wives of extramarital affairs and forcing them to leave home. We now have a new category of displaced victims.”

When Nepal saw its decade-old Maoist insurgency end in 2006, there was an agreement between the state and the rebels that a commission would be formed to punish war crimes.

However, six years later, the commission is yet to be formed. Instead, a string of governments has withdrawn cases against powerful party leaders, nurturing the culture of impunity that encourages fresh crimes.

“In most cases of violence against women, the perpetrators have greater social, economic and political clout than the victims,” says Sharma, whose eight-year campaign to punish a group of army men who killed a 15-year-old schoolgirl remains fruitless. “Also, there is a growing nexus between politicians and criminals, which allows the latter to go free.”

Besides, there is mounting corruption in police, she says. “Look at the Suntali Dhami incident.”

Suntali Dhami is a household name though law and convention dictate that the identity of a rape victim be kept confidential. Dhami, a 25-year-old police woman, was gangraped by six of her male colleagues inside a police station.

Despite repeated calls by the National Human Rights Commission, only three of the rapists, who held junior posts, were charged and found guilty. Three senior officers still remain scot-free.

The government also ignored the Commission’s recommendation to punish two more senior officials who tried to obstruct investigation and gloss over the rape as consensual sex.