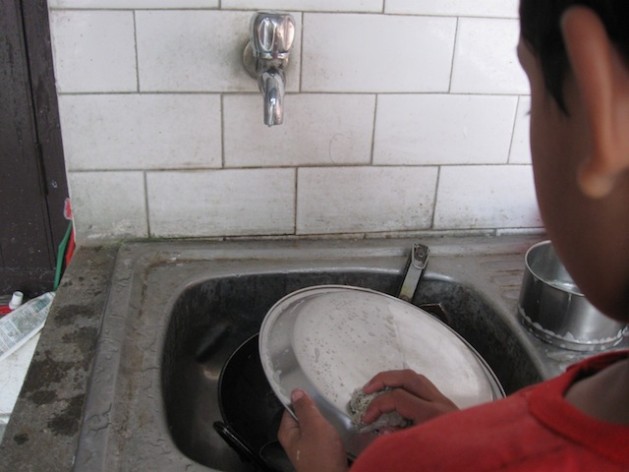 There are an estimated 165,000 domestic child labourers in Nepal. Credit: Mallika Aryal/IPS

KATHMANDU, Jul 25 2013 (IPS) - Last December, Pradeep Dongol, child protection officer at the Kathmandu-based Children and Women in Social Service and Human Rights (CWISH), received an urgent call from one of the NGO’s many offices in Nepal’s sprawling capital city.

Dongol rushed over to find an 11-year-old girl in the care of a CWISH staff member: her eyes were sunken, her hands covered in wounds, and she had lost patches of hair from her head.

He later learned that she had escaped from the house where she was working because she could no longer “bear…all the abuse.”

Reema (not her real name) was studying in grade three in a village about 400 km away from the capital when her parents decided to send her to Kathmandu with perfect strangers.

The family, a young couple, promised Reema’s parents that the girl would live with them, go to a good school and be an “older sister” to their young son.

However, Reema’s life in Kathmandu turned out to be very different. The couple never enrolled her in school; she ate nothing but leftovers, took care of the couple’s son, did all the housework and was never paid.

She had very little contact with her folks back home, was regularly beaten, and often pulled by her hair.

One day, on her way to drop the little boy off at his school, she met some of the local CWISH workers who teach at a school nearby. When she went home and expressed interest in going to that school, she was beaten.

The next day she ran away, and found her way to the CWISH office where she asked for protection.

Of the 7.7 million children between the ages of five and 17 in Nepal, an estimated 3.14 million are working. Two-thirds of these children are below the age of 14.

A recent rapid assessment conducted by Plan International, one of the oldest children’s development organisations in the world, and World Education estimates that over 165,000 working children are domestic labourers.

“Their plight…does not get importance because it happens within the four walls of someone’s home and not out in the open,” Bishnu Timilsina, a team leader for CWISH in Nepal, told IPS.

Gurung believes the government has recognised its weakness, and taken a first step towards building its own capacity through the creation of a multi-sector committee comprising the CCWB, the ministry of women, children and social welfare, the health and education ministry, representatives of the ILO in Nepal and other child rights NGOs that will look specifically at cases of domestic child labour.

The government is also revising the 2002 Child Labour Act and has prepared a national master plan on the elimination of the worst forms of child labour (2011-2020), which, if endorsed by the parliament, will deal directly with domestic child labour cases.

Even as these laws are drafted, child rights activists are urging policy-makers to pay careful attention to rehabilitation of rescued child workers.

“If we rescue a child from abuse and send him [or] her back home, the child should not end up in a worse situation than before…so services—rehabilitation, educational and vocational services—within Nepal’s 75 districts have to be put in place,” Luhar pointed out.

CCWB’s Gurung says that it is much easier to deal with ignorance than willful wrongdoing when it comes to employing minors.

“You can make those who don’t know aware, but our challenge is in dealing with those who know they are violating the law and have the power to fight the system and get away,” she stressed.

Luhar and Gurung both say that combating domestic child labour cannot be done in isolation.

“You are talking about the vicious circle of poverty—the child can’t get an education, grows up without skills, can’t earn a better livelihood and is again the victim of exploitation, abuse and poverty,” says Gurung.

Both experts advocate making child protecting a national priority, including the provision of psychological counseling, rescue and rehabilitation services, education and vocational training via a nationwide programme.

“We are talking about the most productive sector of our society,” Gurung said in reference to children, adding that ignoring the problem now will “cost the country dearly” in the future.
He highlighted the Nepali tradition of bringing children from remote villages to work in private homes in urban areas, adding that, historically, wealthy couples would engage in this practice by promising rural families a better life and education and employment opportunities for one of their children.

Such offers are hard to resist: though Nepal has made progress in poverty reduction, the United Nations Development Programme’s (UNDP) Human Development Report for 2013 placed it at 157th out of 187 countries listed.

According to the National Living Standard Survey 2010-2011 more than 30 percent of Nepalis live on less than 14 dollars per month.

About 80 percent of Nepalis, like Reema’s family, live in rural areas and depend on subsistence farming. Young children are expected to help their parents with farming and household chores.

Roughly half the children under five years of age in Nepal’s remote rural belt are malnourished, while their communities lack basic services like primary healthcare, education and safe drinking water.

The custom of plucking children from their villages gained traction with the rapid industrialisation of the 1990s, when the growth of the middle class coupled with internal migration during the People’s War years (1996-2006) fuelled demand for cheap labour.

Children quickly filled the gap left by women abandoning their traditional roles as homemakers in search of paid work, and took on all the domestic duties from cooking, scrubbing and washing clothes to caring for infants and the infirm.

Now, according to Plan International and World Education’s rapid assessment, there are as many child domestic workers in urban centres (62,579) as in rural areas (61,471).

Child rights activists say one of the biggest challenges is the widespread social perception that child labour is not necessarily a bad thing.

“There’s an understanding that children have to work so that they learn the ‘value’ of labour,” Nita Gurung, programme manager of the state-run Central Child Welfare Board (CCWB), told IPS.

As a result, enforcing laws that prohibit child domestic labour is not easy.

People see young children labouring in the homes of their “neighbours, relatives and friends” and accept this as a normal part of life, says Danee Luhar, a child protection officer with the Nepal country office of the United Nations Children’s Fund (UNICEF).

“There is a need to break through that perception so that society renders domestic child labour unacceptable,” he told IPS.

Nepal has ratified the Convention on the Rights of the Child, the International Labour Organisation’s (ILO) Convention 182 on the worst forms of child labour and ILO Convention 138 on minimum age for admission to employment.

These international accords were translated into national laws via Nepal’s 2007 Interim Constitution and are enshrined in the 1992 Children’s Act, the 2000 Child Labour (Prohibition and Regulation) Act, and the 2002 Bonded Labour Prohibition Act.

However, the creation of national and international legislation without an accompanying increase in the capacity to enforce them has led to confusion about which government agency is implementing which laws in cases of domestic child labour.

At present, 10 labour inspectors are charged with overseeing the entire country and its population of 30.49 million people.

These inspectors only cover formal sectors like mining, tourism and cigarette and carpet manufacturing; it is still unclear who is responsible for the rescue and rehabilitation of child labourers in informal settings, like private homes.

“It is extremely problematic because in cases of abuse and exploitation there’s first a confusion about who is in charge, and what law or act to interpret,” says UNICEF’s Luhar.

When Reema escaped her employers, for instance, she was taken to a safe house and a case was filed on her behalf at the government’s labour office.

Later, at the insistence of authorities, the perpetrators paid Reema cash compensation in the amount of 210 dollars, and signed a legal document agreeing to release her.

Reema is now safely back in her village but has yet to see the money, and her case at the labour office is pending.

“On paper there are regulations to make the perpetrators accountable but that is rarely done, and protection of victims is still not a priority,” child advocate Kamal Guragain told IPS.